The Man Without Talent 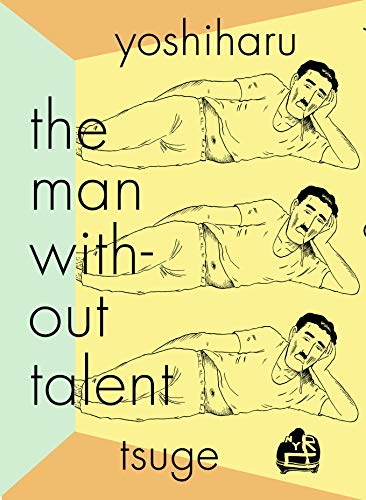 “The Man Without Talent deserves its standing as a manga classic. Tsuge’s simple art and use of black and white perfectly compliment this morbid tale.”

In the world of Japanese manga, few artists are as mysterious as Yoshiharu Tsuge. Is he or is he not still alive? No one can answer for sure. What is known about this elusive genius is: 1) he drew and wrote the groundbreaking graphic novel, The Man Without Talent, and 2) much of that book and others are obsessed with the act of disappearing. Maybe, as the translator Ryan Holmberg says in the introductory essay to this English-language edition of The Man Without Talent, Tsuge’s characters were “hinting at [their] creator’s plans for imminent retirement” all along.

The Man Without Talent tells the sad tale of Sukezo Sukegawa, who is in reality a thinly veiled version of Tsuge himself. Society deems Sukezo a loser—he tries and fails at a variety of lazy professions, from a rock salesman to a dealer in antique cameras. Sukezo’s life is a life of trying to get rich quick but failing every time.

It is also a life that consciously has no meaning, especially in the capitalist crazy climate of late 1980s Japan. As the seller of used books tells him, Sukezo’s “show of talentlessness . . . being rejected by society as useless” is akin to vanishing. It is a vanishing Sukezo seems to want, as, despite all the pleas from his long-suffering wife, Sukezo refuses to return to cartooning. Since the world does not see comics as “art,” why carry on doing it any longer at all? Sukezo casts aside his one talent as a “stingy industry” and that is the end of it.

The Man Without Talent is redolent of Western “loser lit.” Like Bukowski’s Henry Chinaski or Celine’s Ferdinand Bardamu, Sukezo takes a perverse pride in being a superfluous man while simultaneously trying to make himself matter to those nearest to him (his wife and asthmatic son). Sukezo’s superfluousness makes The Man Without Talent deeply philosophical. After all, there is a duality to being “useless” and “talentless”—such people have true freedom to do as they please, and yet, in being roundly rejected by human society, they experience loneliness on an almost cosmic scale. Sukezo is such a lonely figure, and his loneliness is magnified by his constant string of failed business ventures.

The Man Without Talent deserves its standing as a manga classic. Tsuge’s simple art and use of black and white perfectly compliment this morbid tale. More than an allegory of Tsuge’s own battles with neuroses of one kind or another, this graphic novel explores the lie behind the cliché that everyone matters. Yes, Sukezo’s unwillingness to pursue his art is what damns him in the end, it does not negate the fact that society, which separates its winners from the losers, can deem some individuals and whole professions as useless. Sukezo is useless, thus his life is one long hermit’s wandering that is bound to end in irrelevance.

The Man Without Talents is the furthest thing from an uplifting tale. Rather, it is a bleak depiction of the tortured artist and life at the absolute bottom rung of the ladder.