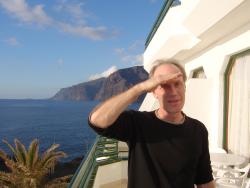 Author of four novels, most recently Back in the Game (2012), Charles Holdefer is a graduate of the Iowa Writers' Workshop and the Sorbonne. He grew up in the Midwest and has spent much of the last two decades in Europe. Hisnovel, The Contractor (2007) about an American black site and the use of torture in the “War on Terror,” was an American Bookseller’s Association “Book Sense Pick.”

He also writes essays and reviews which have appeared in The Antioch Review, World Literature Today, New England Review, The Dactyl Review, The Collagist, l'Oeil du Spectateur, and Journal of the Short Story in English.

Charles currently resides in Brussels, Belgium, and he teaches at the University of Poitiers, France. He is an avid runner and spends much of his time reading and writing on trains.

Find more information and links to interviews and recent work on his website.

Back in the Game

Philip Larkin and the Poetics of Resistance

“This is an artful, idiosyncratic book.”

The Miniature Wife: and Other Stories

“Tenth of December shows the writer in excellent form . . . impressive.”

“Do reading group questions or MLA key words belong in the text? Or do they diminish the artistic effect, because such inclusions impose limits?”

“When Mr. Banks is on a roll . . . it’s a pleasure to go along for the ride. . . . this is a rewarding novel, full of vigorous prose, grappling with the American experience.”

“You Deserve Nothing is a promising début. Alexander Maksik is a skilful writer, and this novel shows a commitment to serious literature.”

We All Fall Down: Living with Addiction

Following Tweak, Nic Sheff’s memoir about methamphetamine addiction, the sequel, We All Fall Down, chronicles the author’s continued struggle to stay sober.

Winner of the Per Olov Enquist Prize, Sweden’s highest literary honor, Jonas Hassen Khemiri’s Montecore is the story of Abbas, a Tunisian immigrant who falls in love with a politically-min

The Architect of Flowers

Frequently, in reference to short fiction, “the well-crafted story” can be a sort of damning praise.