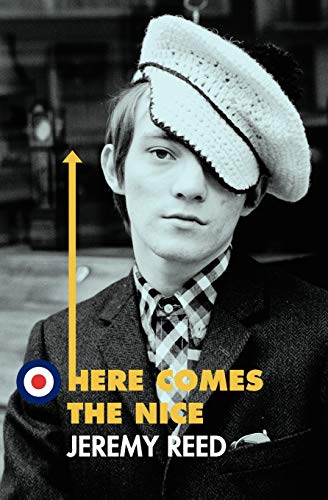 “Jeremy Reed is not one of those establishment poets: boring, beige, and bovine. On the contrary, Mr. Reed stands alone, throwing colored glitter in the air.”

There are certain poets that are favored by the Great British institutions of inclusion. They rub flanks with one another in a shared byre, where their egos are massaged daily. They are fed beer and, if they are particularly complicit, a butt of sherry sack. Editors salivate at the mere thought of receiving their tender, fatty off cuts. And as a gesture of their worth to the masses, they are occasionally led out into schools, where their philosophic lowing has been known to send small children to sleep.

Jeremy Reed is not one of those establishment poets: boring, beige, and bovine. On the contrary, Mr. Reed stands alone, throwing colored glitter in the air. He is a hugely prolific writer, having published well over 50 major works since the beginning of his career in the 1970s, including 27 poetry books, 15 novels, and numerous critical studies of music and literature.

He has also published translations of Cocteau, Montale, and Bogary amongst others. If that were not enough, he collaborates with the musician Itchy Ear to form Ginger Light, which he describes as a reaction against the “staid glow of light that poetry recital currently bathes in; “an attempt to “blur the boundaries that exist between spoken word, music, sound design and song.”

Mr. Reed has won the National Poetry, Somerset Maugham, Eric Gregory, Royal Literary Funds, and other awards, yet he still continues to exist as a literary outsider. When dismissed by Andrew Motion as an “effete little pseud,” Mr. Reed hit back by stating, “the likes of Peter Porter and Andrew Motion would be better off knitting. They've done more to make poetry into a non-event than the current poetry editor of Chatto and Windus.”

Mr Reed is not without his avid followers. Pete Docherty once referred to him as a “legend,” which is as useful as Ronald McDonald offering us his fine dining preferences. Björk too sings his praises. Yet, his most telling endorsement comes from J.G. Ballard who remarked that Mr. Reed’s talent is “almost extraterrestrial in its brilliance.”

On reviewing Mr. Reed’s previous novel The Grid (2008), which is set in a dystopian London of the not too distant future, Bidisha, book critic for the Independent scolded: “One wishes Reed would produce a scholarly work about Jacobean theatre instead of an inexpert cyber-romp. His next work should be excellent, but it shouldn't meddle with the future.” Not one to do what he is told, Here Comes the Nice is Mr. Reed’s 16th novel, and somewhat unsurprisingly, it too meddles with the future.

Mod obsessed journalist Paul lives in a London that is being menaced by Blackjacks, a militant terrorist organization formed by soldiers who have returned battle scared and psychotic from the Middle East, and who are intent on reaping their revenge on the political leaders that sent them to war.

The city is in a state of turmoil, armored vehicles roam the streets, rogue hedge fund managers turn gangster to support their cocaine habits, and violent explosions rock the square mile on a regular basis.

Paul is in the process of researching a book on the 1960s fashion designer John Stephen, King of Carnaby Street, and style guru to the Mods. In doing so, he encounters the Face, a legendary Mod trendsetter who appears to have experienced a time-slip from the 1960s. Seemingly unaged since the pinnacle of his fame, the Face becomes Paul’s stalker; the sound of his modified scooter tearing through the narrow Soho streets.

Mr. Reed devotes alternate chapters to describing Paul’s troubled life in a dystopian London of the near-present and the Face’s charged past as Mod royalty in the sixties capital. Paul is confronted with the task of ascertaining why he is being stalked, as he learns of the Face’s claim to having “reset the death gene”—a means of living eternally in a time-slip between the swinging sixties and the present day. As in The Grid, this is set against the backdrop of a foreboding, fuel poisoned, Boeing filled sky.

Here Comes the Nice (the title of which is a misquote of the Mod speed anthem “Here Come the Nice” by the Small Faces) is a novel of skillfully fused used parts. Lengthy descriptions of the raw early gigs of the Rolling Stones recall Mr. Reed’s collection of poems entitled Pop Stars (1995), which explores the color-shot world of pop icons, including Mick Jagger.

Meanwhile, Paul’s ongoing journalistic investigation of John Stephen is informed by Mr. Reed’s own study for his recent nonfiction title: John Stephen King of Carnaby Street and the 1960s Look (2009). With this knowledge, readers of the author’s past works may worry that his latest novel is somewhat of a cut and paste job.

It is not uncommon, particularly in the visual arts, to find an artist who has become fixated with a specific subject and who, as a result, reproduces it as a motif in a series of works, each displaying minor modifications. There is a sense that Mr. Reed is engaged in the same practice when trying to accurately capture, for instance, The Rolling Stones stagecraft. Here Comes the Nice is punctuated by Stones concerts, many of which allow Mr. Reed the gratuitous opportunity to describe and redescribe Jagger’s “duck walk.”

For some readers, this may become tedious and repetitive, as are many of Mr. Reed’s other habits and fascinations—every girl in London appears to wear a micro-mini, sprayed on jeans, fishnets, or pointed boots. Count the number of times he uses the word ‘hardwired’, or how many times he uses the word “mutant” to describe Suzie, Paul’s Asian floozy.

The strength of Here Comes the Nice lies in the story of the Face that describes the arc of his influence in the sixties, from proto-Mod tastemaker to out of fashion dandy. Here lies Mr. Reed’s “extraterrestrial” brilliance. The Face is an untarnished relic of Mod culture, a way of pulling the past into the present, and describing a bygone style, as crisp and new. Mr. Reed’s psychological profile of a man who is resolutely devoted to Mod is stunning. He sensitively maps the Face’s emotional changes as he slips gradually from the limelight.

As in The Grid, the author’s insatiable urge to pursue the science fiction genre results in a sadly patchy and unbalanced novel. Mr. Reed is at his most impressive when writing about the past. His attempts at the denouement to explain time-slip and the remapping of “the death gene” are unsatisfactory to say the least, and read as confused, post-cyberpunk gobbledygook.

Yet somehow this does not matter. As a writer, Mr. Reed is like the Face. He stands apart from the crowd, unswervingly devoted to his own sense of style, unmoved by any derogatory whispers he may overhear. This review or any other will not alter his sense of perspective.

It is impossible to stress how important it is that we have authors such as Mr. Reed who do not adhere to the tick-box criteria of the current age. His next novel is certain not to pander to trend, fashion, or indeed political correctness; it will be about a subject that he holds dear. We can only hope that it will reflect his true talent as a literary author.