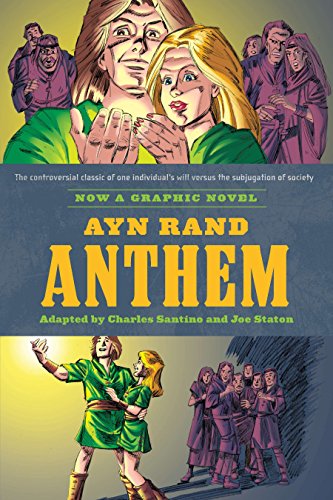 I admit that this review was a difficult one for me to write. How do you comment on a graphic novel adaption of an Ayn Rand book without talking about Ayn Rand herself? I’ll admit a level of distaste for those who embrace her philosophies as a way to justify their own sense of entitlement, but I also find her core concepts intriguing (if not a bit reckless at times).

However, conveniently for me, Anthem is a science fiction story, and as sci-fi’s primary purpose is to serve as an allegorical and often cautionary examination of the current state of society, I can embrace Rand’s spirit of Objectivism and Reason and comment on how her story succeeds in its allegory.

Anthem is set in a dystopian future, where all sense of the individual is annihilated in deference to the collective state and each man’s role in that society is assigned to him. Even the word “I” has been completely obliterated from language, and all citizens carry a designation such as “Equality 7-2521”—in this case, the name of our protagonist, a true Nietzschian übermensche, who we learn right away was probably unfairly assigned to the duty of street sweeper for the great collective. In this setting, mankind’s reverence for a collective yet compartmentalized society has plunged him back to the dark ages, as all knowledge of the age before was destroyed . . . and society’s new structure continues to keep men floundering in ignorance.

Equality 7-2521, ever the rebel, sins against the values of his society when he finds a secret lair belonging to people from the time before and resolves to learn its forbidden secrets. Also in this time his newfound boldness causes him to flirt with an attractive girl he calls “The Golden One” and starts developing some much forbidden feelings for her.

His cunning and ingenuity allow him to relearn many of the ancient’s lost secrets, including the harnessing of electricity, but when he makes the mistake of sharing his findings with the scholarly brethren he is forced to flee rather than suffer their violent outrage toward him . . . a lowly street sweeper who dares presume to bring knowledge to them.

Our hero flees to the dangerous wilderness, quickly followed by his beloved Golden One, and they start their new lives together. Upon finding an old house filled with forgotten knowledge, the two finally find the words to express who they are (the long lost “I”) and can finally express to each other the love they feel for one another. They vow to protect their objects of value by walling off the rest of the world and to mentally liberate those of the collective who possess the wisdom to comprehend what they have come to understand. Presumably they live happy ever after within their gated community . . . in smug contempt for all those who fail to share their enlightened superiority.

Overall, in the context of the story’s setting, I find myself cheering for the protagonist all the way. His masters are slaves to their own ignorance, and who among us hasn’t felt at one time or another that we could do a better job than those who are currently in charge? His sense of individuality is also in direct conflict with general intellectual oppression, a hard one to disagree with, since these idiots hold the candle as the height of man’s inventions. Plus, despite his caste, he is capable and intelligent, and we want to see his talents vindicated. All these are values we can and should hold very high today.

And if you compare our hero to the sort of willful ignorance he was surrounded by, then yes I agree he’s superior and is in essence justified in being so. He “pulled himself up by his bootstraps” and fearlessly faced all adversity in the search for truth. In this manner Rand’s protagonist shares a similar hero’s journey with many other characters from mythology (sans the actual Teacher of course, Rand’s capable hero doesn’t need help from anyone).

Where I think the allegory starts to fall apart is when we start drawing our correlations. You could argue the current leaders of the world are a collective of ignoramuses, but certainly not out of service to any ideal of a sacred society. If anything, I think most current elites of the world would see Rand’s protagonists as a justification that they are entitled to their earnings, if by no other virtue than they were able to earn them—where less educated people would have failed. Her writings (which flatly reject the concept of altruism) were widely embraced in her day as justification for the behavior of people who really preferred to do business without having to worry about the consequences to others.

Rand was a longtime proponent of laissez-faire capitalism and deregulation, and our current economic climate shows us the grim results of allowing people with this sense of entitlement and lack of concern for their fellow man to operate with impunity, and without consequence. So, the allegory of the world which is depicted in Anthem is fundamentally off in comparison to our own, unless you start flipping the roles of hero and society around, and it just isn’t working that way anymore (if it ever truly did).

As a window into these ideas, Anthem gives us wonderfully accessible format in which to explore Ayn Rand’s world. The art is serviceable and the story’s pacing has a nice rhythm to it. It succeeds in telling the story in a very concise manner, and provides a great intro point if you were interested in Rand’s other works (both novels and books of philosophy). I’m never one to say that there are books that should not be read (far from it), but sometimes it’s good to have context for what you’re reading before you start.