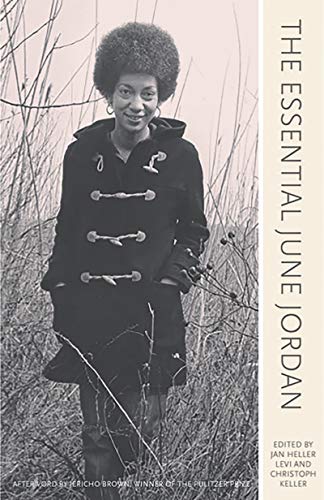 Let’s not call this a review, deal? Who reviews June Jordan? She was the queen of everything. Well, maybe not everything, but with over 25 published books, you’d still struggle to find so much as a bad poem.

June Jordan was the kind of writer that comes to mind when the phrases “you will know them by their words” or “the truth will set you free” come up, never mind the religious context of both of those. Instead you think about writers. Especially women writers. And even more especially, women activist writers. You read Jordan’s work and think, “No. This is what those words really mean.”

And it’s her writing, her talent, sure. But also what it meant when she said the things she said. How you can read her and feel it, her struggle. Be June Jordan for a few. Why not? She’s not with us anymore. Which is why this collection is so truly essential if we are to hang on to even a fraction of the extraordinary inheritance she left us.

And it’s a great selection, The Essential June Jordan. All her beauties, thoughtfully and expertly selected by editors Jan Heller Levi and Christoph Heller. Her best. Her love poems.

Here she is with “Poem Number Two on Bell’s Theorem, or The New Physicality of Long Distance Love”:

“There is no chance that we will fall apart

There is no chance

There are no parts.”

Yeah. That’s the whole poem. She liked to stop when she had said enough. Other times, she went on for the rhythm of it, or to explain those things that were so simple that they were impossible to understand without being in a state of grace, or empathy, as in “The Black Family”:

they mining the rivers

we been going without trees and going

without please and growing on—

on make-dos and breakthroughs to baby

he burning the leaves and firing the earth

we’ve been raising the children

to hold us some love for tomorrows

that show how we won our own wars

just to come in the night

all the hurdles that the murdering

masterminds threw up to stop

we came and we come in glory of darkness

around the true reasons for sharing

our dark and our beautiful

that we give to our dark and our beautiful

who must make the same struggle

against the tyrannical soldier sins

of the ones who beautify plastic and steel

and who fly themselves high on the failure to feel

—they mining the rivers

See? It’s almost impossible to quote just a piece of a June Jordan poem. How would you see the music, the sex, the imagery, the arguments of defiance clad in beauty, the slave songs, the crying, the entire living thing, breathing as a whole? It’s impossible.

There are over 80 poems in the book. Not all of them the most famous, but perhaps the most moving of those she published in life.

And strangely, if you read cover to cover (a great way to feel these deep in your marrow) you get, at first, a sense that there were really two June Jordans (at least). One, the lover. The other, the one better known for her political works, for her activism. But keep reading. Start over and you will see both Junes live in each piece. She could use love to convince, to argue, to plead. She could also use anger to write love, to debate the heady drumbeats of her mind right into sand gone cold outlining a beach.

Why? How did she do that? Maybe she had to learn how to do it because what she called “our wars” were, by the time she’d come of age, everywhere. Even in the Ivy League, for which she wrote, “A Short Note to My Very Critical and Well Beloved Friends and Comrades”:

“First they said I was too light

Then they said I was too dark

Then they said I was too different

Then they said I was too much the same

When they said I was too young

Then they said I was too old

Then they said I was too interracial

Then they said I was too much a nationalist

Then they said I was too silly

Then they said I was too angry

Then they said I was too idealistic

Then they said I was too confusing all together:

Make up your mind! They said. Are you militant

or sweet? Are you vegetarian or meat? Are you straight

or are you gay?

There is not much more to say. Read June Jordan. Read this book. Save it. Give it an important place on your bookshelf. Gloria Steinem famously wrote, “The truth will set you free, but first it will piss you off.” June Jordan would have asked what truth was. She’d have turned it around, maybe said something along the lines of I know how truly pissed, how broken you are. Me, too, but let’s be free. Let me set you off, piss you off, no matter you might tell me to piss off. Let’s stay here. I will share with you our truths.