The Diaries of Franz Kafka 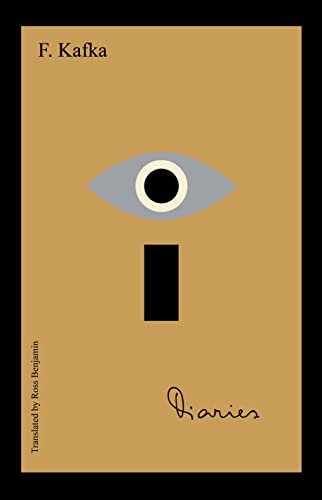 “Ross Benjamin has given the literary world an incredible treasure in this thoughtful edition. Kafka has never been so fully present, both as a man and a writer.”

The Diaries of Franz Kafka are an amazing rich resource for anyone interested in this writer or in the writing process in general. Ross Benjamin has done an admirable job of bringing readers the full text of these many journals, reflecting accurately the obsessive nature of Kafka’s thinking. There are passages that are repeated with small changes over many months as Kafka plays with the nuanced effect of minor differences. There are dreams, letters, descriptions of daily life, book reviews, short stories, travelogues—a full panoply allowing us intimate access to Kafka’s mind and world.

This is the first time the complete text of these books has been translated into English. The previous version, dating from the late 1940s, was based on a much bowdlerized edition prepared by Max Brod. Brod was a close friend of Kafka and charged with destroying these papers upon his death. Fortunately Brod didn’t honor these last wishes of his friend, though his version excised anything too uncomfortable for Brod to see in print. Benjamin’s edition:

“not only restores the unexpurgated text of the diaries but also redresses other significant inadequacies, inaccuracies, and distortions of the Brod edition. Besides omitting or altering the names of and details about people still living at the time of the book’s publication, Brod excised tests that could be considered literary works and indiscriminately suppressed passages of a sexual nature.”

Benjamin does more than include previously omitted pages. He also has extensive footnotes, explaining context, identification of mentioned individuals, historical events, and placement in Kafka’s oeuvre. An entire history is present in these notes alone and allows the reader to better understand each page of the diaries.

Equally important, Benjamin follows precisely the same format as the original rather than the forced chronology Brod chose. And he includes sketches, lines dividing passages, repetitions. This gives the book an immediacy, an intimacy, that is powerfully compelling.

The diaries reveal a fascinating portrait of Kafka as a Jew and as part of a vibrant Jewish community. There are many interesting descriptions of Jewish theater, gatherings, talks. Kafka writes about his interest in Yiddish theater, his sympathy for the actors, “who are so good and earn nothing and in other ways get far from enough gratitude and fame.” He includes gossipy descriptions of arguments among his Jewish friends, comments on Zionism, references to Jewish meetings. He reviews books on Jewish subjects with a sensitivity and knowledge that reveal his own deeply Jewish identity.

This intensely Jewish aspect changes how one looks at Kafka’s writing, specifically The Metamorphosis and The Trial, both of which have different overtones when read as part of the Jewish experience. Waking up to find that the world sees you as a cockroach or being arbitrarily prosecuted for no logical reason may seem more the norm than aberrations. Both can operate as metaphors for life as a Jew in Europe.

The diaries also describe cafe readings, dinners with friends, walks in the park, drawing a picture of daily life in Prague among an intellectual group. And then in the next paragraph, Kafka might launch into pages that read like rough ideas for a story. Or descriptions from something he’s working on. The way daily life and literary thoughts are interwoven is one of the true gems of these diaries. The reader moves back and forth between them just as Kafka did. We see that everything is grist for the writer’s imagination, a source for him to play with and use.

Interspersed through it all, Kafka includes brief phrases of despair:

The last section is devoted to travel diaries, trips to Paris, Rome, Vienna, etc. Besides descriptions of art and his reactions to what he sees, there are humorous insights into the roles tourists play:

“One recognizes foreigners by the fact that up on the last landing of the metro stairs they no longer know their way around, unlike the Parisians they don’t disappear without transition from the metro into the street life.”

But the true ending of the diaries is the last entry in the section before the travelogues. It serves as a kind of farewell to a writer who is thrashing around to find his way, wrestling with words to find his meaning:

“More and more anxious while writing. It is understandable. Every word, twisted in the hand of the spirits—this flourish of the hand is their characteristic movement—becomes a spear, turned against the speaker. A remark like this most especially. And so on to infinity. The consolation would be only: It happens whether you want it or not. And what you want helps only imperceptibly little. More than consolation is: You too have weapons.”

Ross Benjamin has given the literary world an incredible treasure in this thoughtful edition. Kafka has never been so fully present, as both a man and a writer.