Nothing Is Lost: Selected Essays 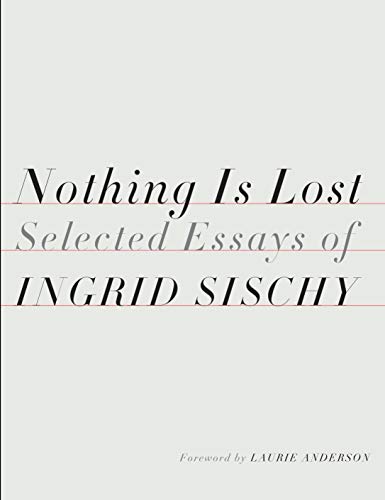 “in a volume that runs for some 600 pages, not a single word seems wasted, not a sentence seems too long.”

In her foreword to Nothing Is lost: Selected Essays of Ingrid Sischy, rock poet and performance artist Laurie Anderson describes her friend, the late essayist and editor, like this:

“Ingrid was so many things: an editor, a critic, a writer who was interested in the political and cultural, and a sometimes curator. Nothing Is Lost is a collection of essays and articles she wrote for a few books and such publications as Vanity Fair, The New Yorker, Artforum, and The New York Times Magazine, and they are intimate, warm, funny, and brilliant, like Ingrid. From the late seventies to the midteens, she wrote about and defined some of the most colorful and pivotal moments in the worlds of art and fashion.”

For a period of time at the end of the last century and the beginning of this one, Ingrid Sischy was the best and most important essayist working the culture beat, as well as one of our most important editors, for Artforum, as well as Interview and The New Yorker, among others. And the impeccably selected essays contained in Nothing Is Lost stand testament to those facts.

Once more from Anderson, there is this—a complement so well-wrought and so intimate that only an old friend could write it:

“For me, reading her words is also hearing her voice, hearing her laugh, feeling the pleasure of sharing her secrets and in-jokes.”

Now, I cannot attest that any of this, as lovely as it is, is actually true. But I can attest to the fact that pleasure is the key term to be used to describe the reader’s experience in reading these essays.

Take this bit as an example—the opening lines from a Vanity Fair piece that Sischy wrote in 2002:

“’My life collapsed,’ Nicole Kidman recalled recently. ‘People ran from me because suddenly it was ‘Oh, my God! It’s over for her now!’ Kidman’s leper moment came last year, when her former husband, Tom Cruise, fired her as his wife—that, at least, is how the split came across to the public. But on the day this past summer when she was reliving that moment of reckoning, it all seemed like centuries ago, not only because so much has happened in her life since then but also because we were sitting inside a trailer just outside of Poiana Brasov, Romania, a spot as physically and psychologically removed from Hollywood as it gets.”

This set up illustrates what set Sischy apart from myriad other writers who interview and/or critique actors (or architects, artists, photographers, or fashion designers, (as Ingrid Sischy worked the full cultural rainbow) in a couple of ways.

First, there is the writing itself. Sischy was never content to just start a story, or to begin an essay with a statement of theme. She loved to place little bombs here and there that would explode on sight.  Kidman being fired by Cruise. The idea of her having a “leper moment.”

To put it simply, Ingrid Sischy has a mad talent for crafting an opening paragraph. And for using that paragraph to impel the reader to plunge headfirst through the rest.

Second, Sischy had a sense of place and an ability to take the reader with her to that place that allowed the reader to feel as well-traveled and sophisticated as the author herself.

The idea of cozying up with Nicole Kidman in some old trailer with cheap paneled walls in the wilds of Romania, where she is shooting the prestige film Cold Mountain—delicious!

These essays, taken as a whole, form a sort of cultural history, recalling the worst days of the AIDS crisis and the arc that ran from approximately from the first Bush to the second. More, they form a narrative of a sort with a series of characters running throughout—Mapplethorpe, certainly, and Keith (“Kid”) Haring, and Calvin Klein (in a essay bearing the marvelous title “Calvin to the Core”), and John Galliano (more on him in a moment), and Alexander McQueen (the James Dean of fashion”), and Elizabeth Taylor (who seems, in some ways, to be the Queen of that moment in history), and Miuccia Prada, who is said to, at first, have “shuddered at the notion of working in fashion.”

Prada gets two essays, one about her complex human nature, the other about her incredible success in taking her family’s ancient leather goods company and transforming it into a fashion powerhouse.

It is in writing about Miuccia Prada’s face that Sischy excels:

“She’s been described as a woman one might find in a painting by Modigliani. Her face veers between beautifully plain and plainly beautiful. She has brown eyes and shoulder-length auburn hair. It wouldn’t be true to say that she’s slim, or that she’s not; she’s what old-fashioned doctors used to call ‘the right weight.’”

Even with topics like Mapplethorpe’s controversial photographic blend of sex and art in the superb essay “That Feeling in the Stomach,” or “A Man of Darkness and Dreams,” on the sad suicide of designer Alexander McQueen, the essay that packs the greatest punch is “Galliano in the Wilderness,” in which Sischy sits down with the notorious John Galliano after his drunken anti-Semitic outburst in a Paris bar got him fired from his perch as head designer for Dior.

In landing the interview that no one else could get, Sischy sat down with the man that she had known for years as a colleague if not a friend. In setting the scene and bringing us to the restaurant table with the two of them, she writes:

“’I’m a bit rusty—I haven’t given an interview for two years,’ Galliano acknowledged. His voice—deep, English-accented, but not a toff’s—seemed tentative at first. He was obviously shaky. I wasn’t so confident, either. We both warmed our hands on our teacups. Later, he told me that he had prayed right before he walked into the room. But when he talked, boy, did he talk.”

“Galliano in the Wilderness” is one of those pieces of writing that should be read by anyone who thinks that they themselves have a future in professional writing, even in just blogging. The way in which Sischy allows her readers to come to understand Galliano and the reasons for his personal and professional implosion in a work that allows for sympathy without ever stooping to pathos exemplifies the best work from the best in the business.

But ultimately, two essays stand out, one in the beginning of the book, from House & Garden in 1989, and the other from a 2015 essay about Elizabeth Taylor called “Her Place in the Sun.”

The first, “The Hands of Time,” is written in a deep Victorian swoon.  It takes us into the Manhattan apartment of the man referred to only as “Mr. H,” who has a wonderful home that, over a period of many years, he has filled with beautifully curated art and antiques that, altogether, H refers to as his “junk picker’s apartment.”

Of his gift for furniture placement, Sischy comments,

“This talent for arranging things as though they belong in a room is rare, but Mr. H has it to spare. He’s not stiff about placement; he goes at it loosely, as though he’s doing a dance with the furniture, the ‘hokeypokey,’ as he calls it. ‘You get a hunch, you move a piece around, you shake it all about.’ And he doesn’t spoil a room’s choreography with too any steps. ‘Knowing when to stop is the trick,’ he says, lamenting all the artists who ‘would have come so close if only they had known when to stop.’”

Learning that Mr. H was actually Andy Warhol’s manager Fred Hughes, a man about New York City known for his critical eye and his ability to buy a given piece of art just before its value jumped only enhances our visit with Mr. H.

Nothing Is Lost closes with “Her Place in the Sun,” which serves a dual purpose. It is at once a remembrance of Elizabeth Taylor, the most famous woman of her generation, and a review of a book named for the street address of Taylor’s Bel Air home, 700 Nimes Road.

From January until June of 2011, Taylor allowed her home to be photographed by Catherine Opie, who recorded each room with care. Her photographs captured the smallest details of the home in which the great star lived, down to the dog eared manual for a television remote control on the table at her bedside.

Taylor and Opie never met.  Opie went about her work downstairs while Taylor’s health slipped away from her in her upstairs bedroom. Ultimately, Taylor went into the hospital, allowing Opie access to that bedroom.

While in the hospital, Taylor let it be known that she wanted, when she went home, to return to a refreshed bedroom, that she did not ever want to see the room she had been trapped in for so many weeks.

Decorators were summoned. As she continued to weaken, Elizabeth Taylor could only point to swatches of paint and wallpaper, but she let her wishes be known and the work was completed in her room, although Taylor did not survive to see it.

With Taylor gone, the series of photographs took on a special poignancy.  As Sischy puts it: “Opie puts the flesh and blood back into the legend. Remember, this is a woman who at the height of her fame and of the world’s obsession with her beauty said that all she saw in the mirror was a face that needed washing.”

To sum up, suffice to say that, in a volume that runs for some 600 pages, not a single word seems wasted, not a sentence seems too long. Sischy, gone now, speaks to us of another age, a time now lost, in which intelligence and talent were as prized as Instagram followers now are and we had no particular reason to fear Tweets.

Surely this golden age, also gone now, will re-emerge one day. After all, as the title promises, nothing is lost.