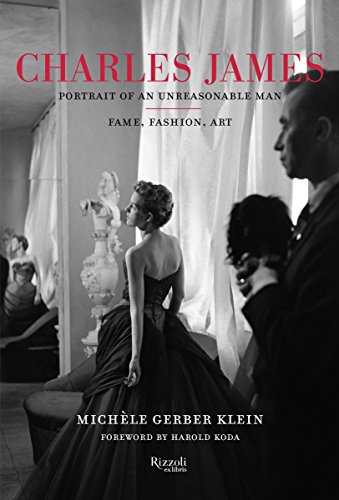 Charles James: Portrait of an Unreasonable Man must be examined and evaluated on multiple levels: there is James the genius; James the spoiled narcissist; James the master networker; the society darling; the musical prodigy; the abundantly intelligent; and, of course, the designer extraordinaire. It might be safe to deduce that had Charles James been born into the present generation he would have been a master at Instagram, Facebook, and all social media given his prodigious ability to network himself and his talents. To say that he made the most of the people he met would be like saying Harry Winston makes nice jewelry.

“I am not a designer, designers are hired help who only copy what’s in the wind . . . all my seams have meaning. They emphasize something about the body. They give the form a variation of physical appeal.” —Charles James

Charles James was obsessive, petulant, innovative, mercurial, outspoken, brilliant, technically blessed, and actually a genius of sorts due to his buffet of talents and his extraordinary breadth of knowledge.

He was a cultivated and cultured man who held his own socially as well as outshining many if not all of his peers in the business of fashion. All of these qualities come to the front by way of how the story of his life is told by the author, his legacy is certainly supported, verifiable and aided by the tapes, in his own voice, which were bequeathed to R. Couri Hay and Anton Perish and then in turn passed on to Gerber Klein.

“Whimsical and impetuous, he was a true genius of line and originality and a perfectionist. Everything he designed was a masterpiece of style and elegance.” —Anne Armstrong Jones

Klein offers the reader all the pertinent biographical information about James and then some, but what she also proffers is a transcontinental social register of the era as well as a dearth of tangential side stories. She provides the reader with a literal who’s who on both sides of Atlantic and how James connected with all of them and parlayed these introductions and meetings to his advantage.

Without question she has delivered a book about one of the most iconic and noteworthy designers of the 20th century and beyond by allowing the reader to connect the dots and recognize that fashion isn’t just about clothes; it is a multidimensional art form that stretched way beyond some well-designed clothes.

Besides all the “juicy” details of James’ professional and personal lives there are these facts that might be little known to most readers such as that Gypsy Rose Lee was a client (to those who even know who she was); James was a huge advocate for mass produced apparel, standardized sizing, truth in labeling—some say he invented the New Look before Dior; his clothes were used in Modess ads (Google it); he was a pioneer in the licensing game; Scassi was an apprentice; and he spent decades perfecting the “perfect sleeve.”

In a nutshell this was one of those fashion books that didn’t require piles of images as most seasoned fashionphiles have already seen so much of his oeuvre. This reviewer was actually rationing his reading time so that the enjoyment would be prolonged for as long as possible. Any reader with an appetite for fashion knowledge can look forward to the pleasure of reading about this one of a kind man who has left an indelible and everlasting impression on the business of fashion.