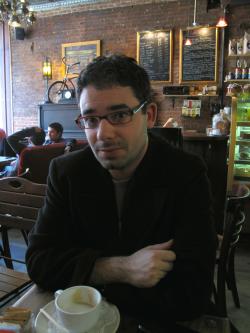 Darren Richard Carlaw is a British writer, editor, and researcher. He studied and taught at the University of Newcastle Upon Tyne, where he completed a Ph.D. thesis examining the New York literary flâneur. His work has been published in the Times Literary Supplement, the Journal of American Studies, Conserveries mémorielles, Spilling Ink Review, and Fractured West.

Dr. Carlaw has what many would describe as a lifelong wanderlust. In literature, this manifested itself as an early fascination with the figure of the picaro and the flâneur. His reading led him to wander the streets of many a great metropolis, from Manhattan to Moscow, with a notebook close at hand. After completing his doctoral thesis, he explored much of America on foot, by Greyhound bus, and by car. Despite living in the North East of England, he is continually drawn back to New York City. During each visit, he endeavors to walk the entire length of the island, from Battery Park to the Harlem River and marvel at the accelerated state of reinvention in which the city is perpetually held. In founding StepAway Magazine, he aims to encourage writers to rediscover the dirty magic of the street by repeatedly treading the sidewalks of their chosen cities.

Dr. Carlaw is currently writing a monograph about walking in New York City.

Postcards from Oxford: Stories of Women and Travel

“Elegantly written, with poise and control, each of the stories presented in this collection beg to be pondered with great care.

I Never Knew That About New York

“I Never Knew That About New York is magical on account of its cumulative nature.

“. . . struggles to find cause for laughter in anguish. New York too becomes a slower, more stifling, monochromatic space.”

Across the Pond: An Englishman's View of America

“. . . stereotype . . . of the fusty Oxbridge academic harrumphing at a changing world that does not correlate with his own. . . . not particularly funny.”

Hitchhiking with Larry David: An Accidental Tourist's Summer of Self-Discovery in Martha's Vineyard

“an overindulgent act of naval gazing.”

Sex and the Citadel: Intimate Life in a Changing Arab World

“The result is a timely, thought provoking, and highly readable study.”

Poseur: A Memoir of Downtown New York City in the ’90s

“Sadly for Mr. Spitz, we rarely look toward the sidelines to seek out the poseur.”

“. . . thank Kurt Hollander for leading us through a city in which many would not have the heart, lungs, stomach, or street smarts to survive.”

London: A History in Maps

City of Ravens: The Extraordinary History of London, the Tower and Its Famous Ravens

“. . . a valuable study [but] Professor Sax misinterprets the value the majority of British people place on the Tower Raven myth . . .”

Johnson's Life of London: The People Who Made the City that Made the World

“Venice Noir is undeniably inconsistent, yet there are a few gems hidden here . . .”

Are We Nearly There Yet? A Family’s 8000 Miles Around Britain in a Vauxhall Astra

“Many readers will struggle to finish this book. Those who persevere will be looking at the final pages and asking forlornly regarding the end: ‘Are we nearly there yet?’”

“Gods Without Men is a handful of desert sand in which each grain has its own unique history, provenance, and abrasion pattern. Mr.

“As hilarious as it is heartbreaking, New York Diaries is a must read for anyone who has fallen in love with the Big Apple.

Paris versus New York: A Tally of Two Cities

“In its entirety Paris vs. New York is a book that encourages playfulness.

The Sexual History of London: From Roman Londinium to the Swinging City—Lust, Vice, and Desire Across the Ages

“Jeremy Reed is not one of those establishment poets: boring, beige, and bovine. On the contrary, Mr. Reed stands alone, throwing colored glitter in the air.”

The City that Became Safe: New York’s Lessons for Urban Crime and Its Control

“Accessible to both undergraduates and postgraduates, this is an excellent statistical study.

Lucking Out: My Life Getting Down and Semi-Dirty in the Seventies

“Lucking Out is a must-read for anyone interested in New York at its most lurid.

Zone One: A Novel

Colson Whitehead is one of a few writers who understand New York.

“As with all great literary agitators, Mr. Palahniuk tests how far he can take his humor—and then pushes further. . . .

“Northwest Corner demands to be read in one sitting, . . . Mr. Schwartz is capable of beautifully poetic prose, . . .

The Last of the Live Nude Girls: A Memoir