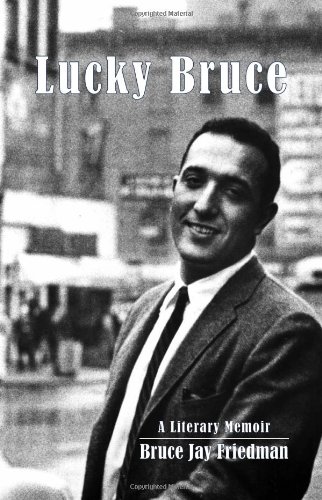 “We should all live such lives—dreaming and attaining, loving and lusting—and look so good when we sit down to write our memoirs. . . . Bruce Jay Friedman retells his life in this off-the-cuff memoir, living, so it seems, an off-the-cuff life as well.”

As some do with any of the books of scripture that make up the Bible when seeking inspiration, so might a reader flip through the pages of Lucky Bruce, Bruce Jay Friedman’s colorful memoir of a writer’s life, and carelessly drop his index finger where he will. Very likely, the reader will target a line that will evoke a laugh, a smirk, or a memory of a very, very good time, for these are the things that largely comprise the rich substance of this latest show business memoir that presents success—especially a writer’s success—as being comprised of equal parts lunches with chums, angry ex-wives, and happy accidents.

“As she lay dying on a couch in 1973, wearing a bathrobe and puffing on one of the beloved Chesterfield cigarettes, she said: ‘Don’t have any sympathy for me, darling. I’ve had my fun.’”

“[Mario] Puzo and [Norman] Mailer had a long-simmering feud, dating back to Mailer’s attack on William Styron in Esquire. (‘The Talent in The Room.’) Styron was Puzo’s hero. He struck back by writing a corrosive review in Book World of Mailer’s award-winning March on the Pentagon.

“In the late years, I told Puzo I had seen Mailer standing at a urinal in Easthampton, after a screening. Actually, with he back turned and the mane of luxuriant gray hair, I thought he might have been Ben Gurion.

“’It’s my understanding,’ said Puzo, ‘that he walks with two canes.’

“’No, I thought there might have been a sword in it.’”

Bruce Jay Friedman, from first sentence to last, seems to have dedicated himself to teaching us all how it is to be done—how one ought to 1) live one’s life, and 2) write a memoir that reminds the reader of how very important that life has been to modern culture (the core purpose of most show business memoirs, after all).

Our author does this with aplomb, and then goes a step further and—after spelling out for us the awards he has won, the movies (Splash, Stir Crazy), books (the novel Stern, among others), plays, short stories and magazine articles (all those Esquire pieces) he has written—actually manages to make his point by showing his life and career to us through an endless series of easily visualized anecdotes, shadow plays, and wry and/or barbed comments. (As opposed to simply reporting his importance to us, as most memoirists rather lazily tend to do.)

The result is a memoir into which the reader may relax, as one might in a warm bath, with a good stiff drink by his side; this is the rare book that busies itself in making it seem that all is right with the world, and proves it again and again as the powers of luck, humor, and lighthearted anarchy triumph over the petty tyrants all around us.

And yet, there is a staccato rumble underneath the surface—a memory of the Bronx, perhaps—in this stream-of-consciousness memoir. Little, if any, care is given to the timeline of events. Therefore, we are reminded at many turns of the author’s unhappy first marriage as well as of the three sons it gave him (sons he would pack into the car and take from amusement park to amusement park in search of the perfect roller coaster), but never given a sense of just when his marriage happened, only where: a little house on Long Island too far from the city to be worth the commute to the unhappy home.

In the same way, the work jumps from his cubicle in the deep circle of hell that was the Magazine Management Company (where he hired soon-to-be author Mario Puzo as his assistant), to poolside at the Beverly Hills Hotel, where, briefly, Natalie Wood worked as his secretary (“I’m sorry, she said sweetly. “You’re stuck with me. I am your secretary.”), to Water Mill, New York, the Hampton that isn’t a Hampton, all effortlessly, all with an air of, “Well, this is how I remember it—are you coming with me or not?”

To expect a strict accounting of years lived and career worked is to fail to understand the man Bruce Jay Friedman, or the life he lived. Manhattan in the 60s—hats with slim brims, three martini lunches, and that beautiful actress who whispered in his ear, “My roommate and I do sandwiches,” to which Friedman reportedly responded, “In a deli?”—or Hollywood in the 1970s (the stuff of movies, literally, I promise you), or the Hamptons thereafter, these are the settings and subjects that Bruce Jay Friedman has to share. He bobs through his own life like a buoy on the high seas, drifting rather without purpose or plan, but enjoying the sun and the sea spray.

Thus, as the text reinforces, the title says it all: Lucky Bruce.

We should all live such lives—dreaming and attaining, loving and lusting—and look so good when we sit down to write our memoirs.

But let him tell you about them, the great moments that, gathered up, make up his life story, those things that are retold here, in the myriad one-liners that make this book the joy it is to read.

Let Bruce Jay Friedman tell you of a guest he saw at a Hollywood party in the late 60s: “Joan Collins was there, hands on her hips, eyes flashing, daring someone, anyone, to do something, anything.”

Or of the lunch he had with old friend Mario Puzo, who was now at the height of his fame. The Godfather having cemented his reputation, he was then working off a half-a-million dollar commission writing the first Superman movie: “I recall him looking off wistfully into the distance and saying, ‘They never call me for comedy.’ (‘They,’ being the Hollywood people.)

Or of the advice he received: “My mother, then in her last days, had given me two bits of advice: 1) Don’t follow buses and inhale the fumes. 2) Never move a hit show.” (When famed Broadway producer David Merrick ran up against this ironclad advice when trying to move one of Mr. Friedman’s plays, Steambath, up to the Great White Way, only to be told no, he reportedly asked, “Your mother again?” To which Friedman answered, “I’m afraid so, sir.”)

Or, best of all, the reported words of an ancient agent, “the ageless Robert Lantz:” “When I asked him how old he was, he would say, even then, ‘I am in public domain.’”

And so it goes. Bruce Jay Friedman retells his life in this off-the-cuff memoir, living, so it seems, an off-the-cuff life as well.