The Genius in All of Us: New Insights into Genetics, Talent, and IQ 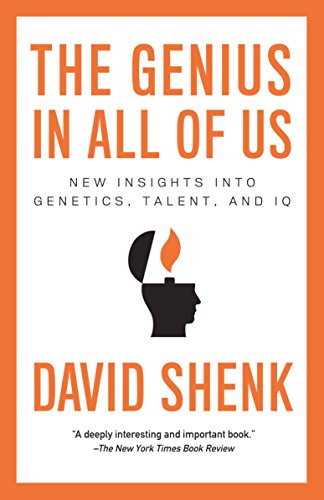 Are geniuses born or made? Is there such a thing as natural talent? Are some people born with more talent and ability than others? For as long as most of us can recall, the premise of nature vs. nurture has been used to describe the two major components that are said to influence a person’s life.

Bestselling author David Shenk makes it his task to showcase a different, somewhat overlooked alternative concept in The Genius in All of Us. He believes that hard work and practice are critical to success, not something you either have or don’t. As he states, “Talent is not a thing; it’s a process.”

This book is more than what it appears to be at first glance. It is not one man’s attempt at coining a new phrase or repackaging old ideas in a new format. Rather, Shenk has spent time gathering facts and gives credit where credit is due. He thoughtfully presents the reader with a manageable amount of information geared at unseating the status quo regarding genius, or the lack thereof. He is direct in his take on what has been fed to the public over the last 100 plus years—personal concepts that have not stood the test of rigorous scientific study, that reek of sensationalism and, that let slackers off easily by claiming that genius is an inherited gift.

If you choose to read the book in the hardcover edition, which was this reviewer’s experience, it is worth taking a few moments to examine the book without the dust jacket. In doing so, observe the care and deliberate effort that went into the creation of the volume. The physical proportions, type font, graphics and paper stock (even its slight buff color) lend an air of timelessness. What better way to present a concept that is meant to be taken seriously?

The text is divided into two main parts followed by “The Evidence”—an equal number of pages devoted to elaboration on the sources and points made in parts one and two, along with comments by the author. Clearly, Shenk and the team he worked with devoted their best efforts to presenting an alternative to what he calls a wrong-headed approach to genius and success that has been embedded in the minds of the general populace.

There is one new term, “interactionism,” that is used to characterize the concept of genetics interacting with environment. An easy-to-remember shorthand is G x E. The reader is advised that plasticity in humans, even as early as during gestation, guarantees that no ability is set or fixed. Just as Shenk advises that practice and hard work are required to bring about the best results, the reader needs to know that attention and open-minded commitment is required on his or her part to fully realize the value within The Genius in All of Us.

David Shenk is a master at writing and sets a pace that allows the reader to consider the concept of G x E. His clear voice is consistently authoritative; however, he never casts the reader as a lesser person. Shenk carefully sets out the premise of G x E using incremental steps to coax the reader’s acceptance of how thought has unfolded over time within the academic community. Helpful citations referencing prior chapters reinforce the learning process. There are no great leaps in thinking or pushy theories, just well documented scientific thought and exploration. Shenk does his due diligence examining findings from dissenters; he demonstrates where they all miss the mark.

The Genius in All of Us is filled with hope and is a call to action that fosters flexibility in thinking and a commitment to growth and success. This is a book worthy of a reader’s time and lengthy contemplation.