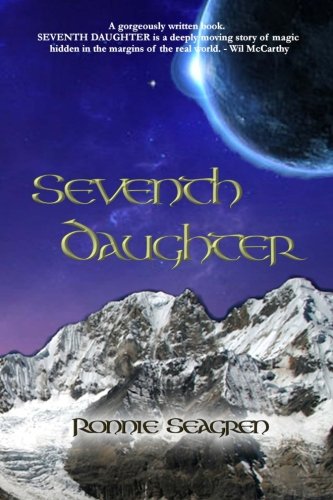 Some people are destined from birth to do great things.  Gil Orlov is born at the zenith of a full solar eclipse, the seventh daughter of a seventh daughter.  She is the end goal of a carefully planned genealogy begun by her predecessors hundreds of years earlier—all women of remarkable psychic abilities.  Through this family history a prophecy has evolved which predicts the end of civilization will occur in the mid-twentieth century—unless a seventh daughter of a seventh daughter can forestall it. In 1937 Gil is a college student ready to begin her monumental journey to a holy site high in the Peruvian Andes known as Killichaka, the Bridge to the Moon.  She and her six older sisters must find an ancient ruins and there perform a holy ritual at the height of yet another eclipse.  If completed, Gil will be gifted with amazing powers, which will allow her to manipulate world events and prevent the global disaster her ancestors have warned of.  Since childhood she has had horrible visions of a world consumed in nuclear fire, and with the advent of another world war, Gil is convinced those visions vindicate the family prophecy. What Gil and her sisters are unaware of is that they are being shadowed by someone with an all-consuming hatred for their family: an abandoned eighth daughter.  Gamella is Gil’s identical twin, born only minutes after her sister.  Her surprise birth set into motion a deep dark secret that now threatens to unravel the Gil’s mission and bring about chaos and destruction.  Amidst this frantic race for Killichaka, between the two groups arises a third and crucial figure, Gil’s former economics professor, Galen Williams.  To complete the sacred ritual, a guardian is needed to protect the candidate of power, and Gil, before leaving the campus, invites Galen to assume that role without being completely forthcoming with him about her mission.  When he finds himself alone and lost in Lima, he is easily duped and recruited by the evil Gamella, believing her to be Gil.  She sets about seducing him with offers of wealth and power if he will assist her in becoming the ritual candidate. Seventh Daughter is one of the most original and mesmerizing adventure plots to come along in a long, long time.  Ronnie Seagreen spins her story with the perfect balance of action and characterization.  No easy task with such a large cast, but she does so effortlessly, and all of Gil’s sisters come to life with their own distinct personalities and traits. She is also to be applauded for her brilliant, authentic depiction of the locales so that the reader is pulled along with every hard breath and body ache required to survive in such a harsh, high altitude world.  The book’s final quarter had me frantically turning pages wanting to keep up with the action, it culminating in a rewarding and powerful climax that will leave you as drained as the characters. This is a brilliant first novel by a writer of tremendous talent not to be missed.  Move over Clive Cussler, Ronnie Seagreen has arrived. Reviewer Ron Fortier is an author and a frequent reviewer of pulp fiction. He is currently working on a new comic series, Mr. Jigsaw, Man of a Thousand Parts from Rob Davis’ Redbud Studio.