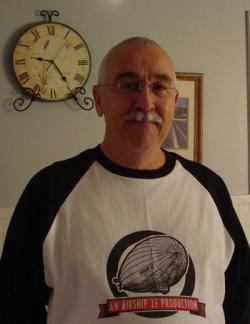 Ron Fortier has been writing professionally for 35 years. He is best known for his work on the Green Hornet comic series for Now Comics and writing Alex Ross’ first comic project, Terminator: Burning Earth for the same company.

Four years ago he co-founded Airship 27 Productions with artist Rob Davis. The company produces brand new novels and anthologies featuring classic pulp heroes from the 1930s, to include Mr. Fortier’s revival of Captain Hazzard. Their books are published by Cornerstone Book Publishers of New Orleans, and you can visit their online store.

Trail of the Seahawks (Windwalker Book)

“There is not a lemon in this batch of stories. Mr. Collins’ writing style is terse and economically efficient.

Glamour Job: A Fairy-Tale for Grown-ups

“Glamour Job is a rollicking tale that never lets up.

“Noir is not easy to write—and nearly impossible to do successfully in the first-person POV— especially when you know from the very first ‘I’ that the hero(ine) will survive, strangling

Griots: A Sword and Soul Anthology

“Griots—French for African storytellers—collects 14 tales of exotic action and adventure all presented by African American writers. . . .

“The Wrecker is a truly magnificent historical adventure with a relentless pace, speedy as the trains it describes, populated by noble heroes and dastardly villains.

Conan the Barbarian: The Original, Unabridged Adventures of the World's Greatest Fantasy Hero

“The book is fun and does its job well; it makes you want to go see the film. So please, save me the aisle seat.”

“Mr. Koontz is truly a master tale spinner and in Frankenstein: The Dead Town he is at his best. And that’s saying a lot!”

“The Silent Killers is a unique look back into an underwater realm few have ever seen. It is truly a remarkable work on all fronts.”

“. . . both a fast paced thriller and a history at the same time. Talk about more bang for your buck. . . . perhaps the author’s finest book ever.”

“Author Dietrich’s background as a naturalist and historian allow him to successfully create outlandish plots against authentic, real world settings, and it is that richness of historical d

“William Speir’s skills as a storyteller are growing exponentially with each new book. Once again I heartily recommend this to pulp fans looking for a new twist on action-adventure prose.

“Rex Riders is a deft blend of action, humor, and wall-to-wall adventure in a truly original setting. Reading it was nothing short of pure joy, . . .”

“Mr. Hancock knows his history, and the richness with which he paints the times adds much to the book’s plot and appeal.

“Mr. Koontz’ most audacious pulp novel to date. It is a bold, raucous narrative that moves at lightning speed.”

Hot on the heels of earning a Pulp Factory Award nomination for Best Pulp Novel of 2010 for Ghosts of Manhattan, writer George Mann unleashes the second novel in this steampunk series.

The trouble with most history books is that they are generally impersonal. They offer up the facts and then focus solely on the public figures that actually shaped events.

Although the straightforward, no frills western genre seems to exist only in today’s paperback market, where the proliferation of the “weird” western tableau is visible everywhere.

This book, the third Mike Hammer thriller begun by the late Spillane and completed by his protégé Collins, takes place in the mid 1970s.

Eerey Tocsin on the Underwater Island

Several years ago, Kevin Noel Olson wrote one of the most imaginative young adult books I’d ever read, Eerey Tocsin in the Cryptoid Zoo.

Texas Standoff: A Novel of the Texas Rangers

The writing in this book is so lean it becomes a literary illusion as it packs so much story in those economic words.

The Black Hand: The Epic War Between a Brilliant Detective and the Deadliest Secret Society in American History

When a notorious Italian assassin and his wife are found stuffed in a barrel and floating down the Thames River, Scotland Yard puts out a call to Inquiry Agent Cyrus Barker to assist them in foilin

Out of the Dark

Alien invasions are nothing new to both the science fiction and fantasy genres. Books like H. G. Wells’ War of the Worlds and L.

Reckless is a gripping suspense novel deftly plotted so as to move along at an easy, exhilarating pace that never once feels contrived.  Each scene seems perfectly set in sequence so that

The only problem I ever have with Peter David’s unique and original Star Trek paperback series is that they appear too infrequently.

Once again civilization is on the brink of collapse. Global warming is increasing to the detriment of the environment and all life on the planet.

When a book mixes science, religious philosophy, and secret societies dating back to the Nazis, you can expect a really spicy pulp stew.

Every time Max Collins delivers a new crime thriller, I buckle up in my favorite chair, pour myself a cup of coffee, and prepare myself for an exhilarating ride.

It is no secret that I’ve been a huge supporter of Hard Case Crime and their truly marvelous line of new and classic noir crime thrillers.

Fortunes of War (The Sentinels Book 1)

Having majored in Business Administration while in college, I know just how dry and boring subjects like Economics and Financing can be, which is why finding a modern day pulp thriller set in World

He’s back, the daring pulp avenger from Atlanta, GA, in six new, thrilling tales of mystery and mayhem.

The Book of Lies

With what weapon did Cain murder his brother Abel?  The first crime, as described in the bible strangely omits that particular detail, focusing instead on the moral outrage of the act itself.  Coul

The Alchemy of Murder

Nellie Bly was the pen name of pioneer female journalist Elizabeth Jane Cochran.  She is most famous for two daring feats: a record-breaking trip around the world in emulation of Jules Verne, and a

She Murdered Me with Science

The joy of pulps is how some are so hard to categorize, case in point this terrific novel set in an alternate 1950s.

Some people are destined from birth to do great things.  Gil Orlov is born at the zenith of a full solar eclipse, the seventh daughter of a seventh daughter.  She is the end goal of a carefully pl

Odd Hours is Koontz’s fourth thriller starring his psychic hero, Odd Thomas.  He was to be named Todd, but a misprint on his birth certificate left him with a unique name to match his uniqu

In the year 1798, Napoleon Bonaparte invaded Egypt. His obsession? The wish to make himself a modern day Alexander the Great.

Bantam Books, July 2009 Reviewing the last book in a series is often times a fruitless enterprise.

Here is a reviewer’s riddle. When is a big book like a little book? Answer: when it’s so well written you breeze through it in no time at all.

The world of professional boxing has historically been tainted by organized crime on many occasions.  There are those who believe even when completely legitimate, the sport lends itself to same kin

A Princess of Mars

White Rocket Books, 2009 When Edgar Rice Burroughs wrote his interplanetary adventure back in the early days of the 20th century, knowledge of our solar system and the planets that made it up was