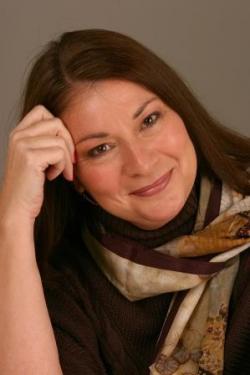 Her plays have been performed and showcased in venues such as The New Light Festival of Green Light Arts, the Shubin ArtFest, and the Philadelphia Fringe Festival.

Ms. Scott has written several short screenplays and is currently working on a book/documentary project called ’Junct: The Trashing of Higher Ed. in America.

She is also planning the launch of several new projects through Hidden River: a yearly arts and music conference, and several overseas writing retreat activities— one to Havana and the other to Dublin. She has recently returned to singing professionally, and performs as one half of The Cabaret Divas, so far in Philadelphia venues, but with plans for taking their shows on the road on the cabaret festival circuit in 2019.

As an arts and education activist, Ms. Scott has lobbied, written, and spoken on behalf of issues of the corporate takeover of our public education: pay equity for university and K-12 educators, student loan debt, European public education options, homeschooling, special education, as well as the importance of arts in our schools and our society.

Through the centuries, Marie Antoinette has been an object of fascination, sometimes approached with pity, sometimes with derision, but never with disinterest.

The Autobiography of Somebody Else

“I’d always tried to seek the truth and to faithfully record the spontaneous overflow of accidents that life is.

The Play's the Thing: Volumes I and II

As someone who teaches humanities courses at the university level, I am often in despair at the superficiality of understanding my students have regarding Shakespeare.

The Far End of Happy

“a compelling read, an unflinching exploration of one of life’s most inexplicable horrors.”

“Greenstein weaves a story of past and present in a way that creates a sense of timelessness.”

“Ultimately, bravery, love and hope are celebrated in The Fifty-First State, a state that is imagined, a state in which a better life is possible.”

Met Her on the Mountain: A Forty-Year Quest to Solve the Appalachian Cold-Case Murder of Nancy Morgan

“Pinsky’s conclusion of the Morgan case is endorsed by a good number of her surviving family members; but there are law enforcement officers who . . .  vehemently disagree.

“Explore Mr. Gray's earlier works since this one is clearly not one of his strongest.”

“In The Homegoing we enter this world as outsiders, but through Michael Olin-Hitt’s tender revelations we experience a sense of coming home.”

The Bible Repairman and Other Stories

“Even if you are not a regular reader of fantasy fiction, you may well enjoy this collection. Mr. Powers is a talented writer.

“So I will say it in simple language: Buy this book. Read this book. It is masterful. It is one of the best short story collections published this year.

Things We Didn't Say: A Novel

“Sadly, the elements that would have made this a more compelling novel remain missing. That which we are hoping to understand, unfortunately, still remains unsaid.”

Tracks: A Novel in Stories

“. . . the kind of book that you can read best at a leisurely pace, enjoying the slower rhythms of this literary ‘people watching.’”

Faith is a story about the many ways we can create belief systems and trust structures, and the even greater number of ways that those systems and structures can be threatened and destroye

The Late Interiors: A Life Under Construction

How might a woman harvest meaning from the rich and devastating complexities of her life? In The Late Interiors, Marjorie Sandor explores this question.

Light Lifting by Alexander MacLeod is a muscular collection of short stories. That is to say, the collection is filled with physicality of all sorts.

Home to Woefield: A Novel

What happens when an urban dweller attempts to live a more sustainable and authentic life? Chaos. Near financial ruin. Hilarity. And, finally, triumph.

Romanov Riches: Russian Writers and Artists Under the Tsars

To those used to the utter lack of respect given to artists in contemporary times, especially in America, the topic of Mr. Volkov’s book may seem puzzling.

The Long Road Home: The Aftermath of the Second World War

Millions of words of have been dedicated to the discussion of World War II, its causes, its horrors and its aftermath.

Curtis Smith is a wonderful storyteller.

Degrees of Elevation: Short Stories of Contemporary Appalachia brings together 17 gifted writers whose voices are as unique and striking as the region about which they write.