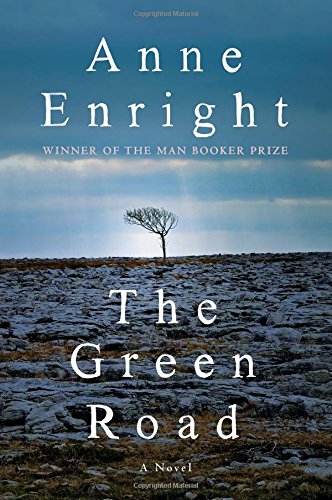 “The Green Road would make a great movie—long, painful, and strangely uplifting.”

To journey down The Green Road, Anne Enright’s forthcoming novel, is to take an arduous trip. Not because the writing is difficult—it is elegant prose in classic Enright style—but because of the thicket of human relationships discovered along the way.

Winner of the Man Booker Prize for The Gathering, Anne Enright is at home with this novel spanning 30 years and three continents with Ireland as the starting point of the family odyssey. The book drags you into the lives of unhappy people that remind you of everyone you know—and never really get to know.

The title The Green Road is a real road that runs through the Burren in County Clare, Ireland. It is also the epicenter of this novel, tracing the lives of Rosaleen, matriarch of the Madigan family, and her four children whose paths diverge and then intersect as they untangle a complex web of emotions and the unresolved issues of growing up in a country village not far from “the humpy bridge.”

From the start, things are not right in the Madigan home. Rosaleen has taken to her bed, again. “This was not the first time their mother took the horizontal solution, as Dan liked to call it, but it was the longest that Hanna could remember.”

Dan, the oldest brother, has announced he is leaving home to join the priesthood. (In fact, he is headed to New York to pursue a gay lifestyle.) Hanna, the youngest, at the age of 12, is left to comprehend the new family dynamic with a father that says little but leaves a big impression. “Hanna was mad about her father’s hands, they were huge, and the sight of them on the steering wheel made the car seem like a toy car, and her own feelings like baby feelings she could grow out of some day.”

The other two siblings—Emmet and Constance—feel equally distraught but choose entirely different paths to deal with the imbalance in the household.  Emmet chooses to become an aid worker in Africa and to get as far away from Ireland as possible. “This is what pushed him, from one country to the next.  This energy. A woman who did nothing and expected everything.”

Constance, the oldest, becomes the caretaker—seething with resentment for having to shoulder all the family responsibilities. “All Constance wanted to do was make people happy. Why was it her job to fix them?”

As The Green Road unfolds, the characters lives evolve in twisted and circuitous ways with flawed relationships and unresolved issues with their mother who ages in the same house with the same memories.

Rosaleen comes face-to-face with her disappointment over her children—“the ungrateful children I reared.” She bemoans the fact that “they had all left her.  They deserved no better.” And the house is falling apart as only Enright can describe: “The gutters falling into the flowerbeds, the dripping taps, the shut-up rooms that she had abandoned, over the years; the pity of it; an old woman chased into a corner by her own house.”

A Christmas reunion brings them all together with ghosts of the past and sins of the present. All the emotions are on display: guilt, blame, and forgiveness. There are surprisingly tender moments amidst the rage that engulfs a family with bits and pieces of every nuclear family.

By the time of the reunion you know these people. They are your family. Enright has done a brilliant job developing them and nurturing them such that you own their stories and you feel their pain. They are no longer characters. She has given them life.

The Green Road would make a great movie—long, painful, and strangely uplifting. The road would be paved with bumps and potholes and the characters bruised but not buried. In many ways, it is truly an Irish tale with unending and unyielding scenery reminiscent of the journey of life.