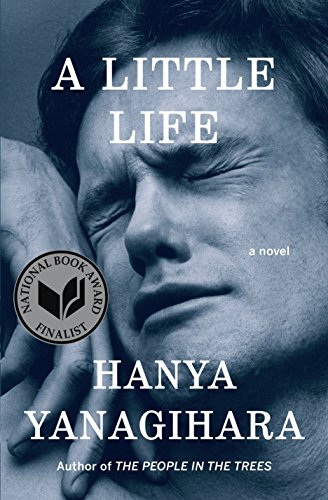 There is nothing little about this book including its emotional impact.

Hanya Yanagihara’s A Little Life is not a tear-jerker. It is too sophisticated and subtle for that. But it is a book that will crawl beneath your skin and lodge itself there, like a splinter you feel but cannot touch. And even when the book is over, you still feel the prick of the intrusion—the sensation of something you had, but lost.

Well-written and exquisitely crafted, this is a powerhouse book. But before you read on, a caveat. There is little about Hanya Yanagihara’s A Little Life that is small.  At over 700 pages, it is not so much a book as a journey. It is a summer companion, nagging you constantly to pick it up and make headway—even get across the finish line. And a warning: once you do, you will grieve once it is over.

“What’s it about?” someone asked me, in disbelief that anyone could write such a long novel about “a little life.”

Well, it’s about friendship—that agonizing, astonishing, absolutely unnatural relationship that people, with no biological connection, find and forge. It’s about the intimacy of friends that meet in college—thrown together as often happens in random settings. It is about friends who meet as young people only to spend the rest of their lives and the rest of the book trying to truly know each other

Jude, Willem, Malcolm, and JB find themselves living together as roommates during freshman year--that transitional period when teens become adults. Fate throws them together but intimacy keeps them together as their lives unfold in the decades that follow.

“All of them had other friends (JB and Willem had the most), but it was known that their first loyalties were to one another. None of them had ever discussed this explicitly, but they all knew they liked this assumption, that they liked this code of friendship that had been imposed upon them.”

Jude is the tragic hero of A Little Life. He has a deep, dark past of abuse and neglect, at the hands of dirty priests. He lived in a monastery and then in foster care and he bears the scars, literally and figuratively, from an unspoken, tortured past.

Jude’s closest friend in the group is Willem—a country boy who arrives at college with his own sad story of having cared for a disabled brother and lost his parents. Malcolm is the stable college kid, the product of a well-to-do family. But he feels unloved, especially by his father. JB, the artist, is from a Haitian-American family. Raised by a loving mother and aunts, he is still filled with self-doubt.

You get the picture.  There is a lot of loss in the lives of these four boys who find in one another the enduring power of friendship. In many ways, our friends fill in for family and these boys look to each other to bridge gaps and create memories.

The book opens with Jude and Willem looking for an apartment together in New York. “In the bedroom, Jude was accordioning the closet door, opening and shutting it, when Willem came in. “There’s only one closet,” he said. “That’s okay,” Willem said. “I have nothing to put in it anyway.” “Neither do I.” They smiled at each other.

“Nothing to put away” and yet so much to put away. It is a metaphor that evolves as the lives of these characters become full—brimming with events and changes. As the boys become young men, choosing careers, earning their first paychecks, finding their individual paths, they constantly come back to one another for support as the challenges of life overwhelm them.

Yanagihara’s characters all wish they could start anew. As Malcolm thinks, “He longed for the years when it was enough to simply be in his room with his hand moving over a piece of graph paper, before the years of decisions and identities, when his parents made his choices for him, and the only thing he had to concentrate on was the clean blade stroke of a line, the ruler’s perfect knife edge.”

The author of A Little Life reminds us that friends often keep secrets—even from each other. Friends tell each other “everything” yet hold back, as Jude mostly does, in refusing to share his painful past even with his most intimate friend, Willem. For the most part, the boys accept Jude’s silence and yet feel tortured by it, guilty at how it has left their friend with constant back pain and psychological wounds from which they can only guess the causes. “The pain in his legs, for example: as long as they had known him, they had known he had problems with his legs. It was hard not to know this, of course, he had used a cane through college, and when he had been younger.”

But it is Willem who is most torn by Jude’s refusal to share his secrets and by his own reluctance to probe further. “He had never discussed it with Jude, but in the years to come, he would see him in all sorts of pain, big pains and little ones. . . . But although he was a man who kept his promises, there was a part of him that always wondered why he had never raised the issue with Jude, why he had never made him discuss what it felt like, why he had never dared to do what instinct told him to do a hundred times . . .”

Jude’s plight is to reckon with his past and hold onto his dignity despite the scars of his past which leave him feeling unwanted and undeserving.  The only way he knows how to make sense of his past is to punish himself by cutting himself. (For readers who find that act disturbing, it should be noted that the self-mutilation is repetitive throughout the book.)

Jude’s physician-friend, Andy, does his best to address Jude’s physical and emotional issues but Jude is determined to live the way he wants to live despite his ailments. “But what Andy never understood about him was this: he was an optimist. Every month, every week, he chose to open his eyes, to live another day in the world. He did it when he was feeling so awful that sometimes the pain seemed to transport him to another state, one in which everything, even the past that he worked so hard to forget, seemed to fade into a gray watercolor wash.”

The book presents us with the ultimate moral dilemma of how to allow others to live as they choose but wanting them to choose a life worth living. A stunning character is Harold, Jude’s law professor, who comes to adore Jude and become the father figure. Once again, Hanya Yanagihara reminds us that not all love is genetically based.

As Harold says, of Jude, “Once you decide to think of someone as your child, something changes, and everything you have previously felt for them, is preceded first by that fear. It’s not biological; it’s something extra-biological, less a determination to ensure the survival of one’s genetic code, and more a desire to prove oneself inviolable to the universe’ feints and challenges, to triumph over the things that want to destroy what’s yours.”

Navigating a huge novel is always a challenge. Yes, it sags in places. But you remain captivated by the question of whether or not these boys can save one another from grief and destruction, and so you hang on every word of this novel as it celebrates the triumph and tragedy of the human connection. It has a tenderness that will shake you and the kind of writing that will lift your spirits while, simultaneously, taking you to dark places.

At its core A Little Life is about the tentativeness of life and the moorings of friendship—the utter comfort of knowing someone in your life cares in such an unrelenting way. It is about holding onto friends over the course of life—looking for the “opportunity to create memories . . . keeping friendship alive by dropping bundles of kindling onto a barely smoldering black smudge of fire.”