Smarter Faster Better: The Secrets of Being Productive in Life and Business 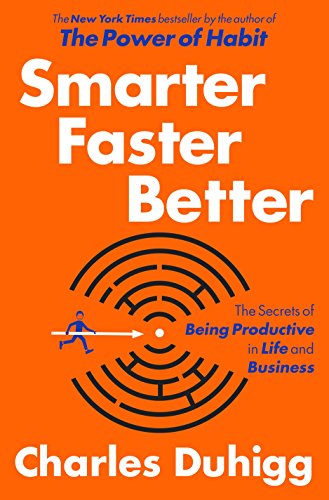 In a world obsessed with productivity, it is timely to read a book that tells us who is likely to be productive and why.

In a well-researched and engaging study, Pulitzer Prize-winning investigative reporter Charles Duhigg of The New York Times builds on his earlier book The Power of Habit with a new and compelling look at human motivation. What gives us the energy, drive, and commitment to produce effective results in our personal and professional lives?

Smarter Faster Better: The Secrets of Being Productive in Life and Business is rich with anecdotes, characters, data, scientific analysis, and Duhigg’s own personal struggle to understand the keys to human productivity and how much of that behavior is instinctive, learned, or connected to our brains.

Through a deep dive into fields like Hollywood, medicine, corporate America, the military, and science Duhigg forces us to define productivity in new ways. He unpacks the productivity theme by talking to poker players, airline pilots, military generals, filmmakers, business executives, and ordinary people. And his conclusions are stunning:

“Productivity isn’t about working more or sweating harder. It’s not simply a product of spending longer hours at your desk or making bigger sacrifices,” he writes. In fact, many of the people Duhigg introduces are rarely at their desks. What they have in common are characteristics and techniques to solve problems in productive ways using a number of subliminal tools.

Duhigg identifies in the book the importance of imagining your day, visualizing a meeting, making mental pictures of your work. In the book you meet Darlene, a successful pediatric nurse credited with saving many infants by seeing a crisis before it happens. She succeeds by carrying around a mental picture of what a healthy baby ought to look like. In her mind, she sees the infant in good condition and then notices when there is something different between her visual memory and the physical baby, unlike other nurses who just focus on medical data.

“People like Darlene who are particularly good at managing their attention tend to share certain characteristics. One is a good propensity to create pictures in their minds of what they expect to see. These people tell themselves stories about what’s going on as it occurs. They narrate their own experiences within their heads. . . . They visualize their days with more specificity than the rest of us do.”

Another technique used by highly productive people is the creation of a team where everyone feels at ease. The case study used in the book is the popular show Saturday Night Live, in which producer Lorne Michaels gets high marks for years of creative productions. His kind of productivity is reflected in the sense of “psychological safety” he creates within his team. People are encouraged to speak up, speak out, and feel comfortable in ways that open themselves up to full productivity.

A similar technique is used by producers of the hit film, Frozen. The movie had a rough production start until the producer encouraged actors to truly envision and share personal experiences with sibling rivalry in ways that opened them up psychologically.

Duhigg also profiles choreographer Jerome Robbins who found that productivity increased most often not just by letting ideas in, but by taking proven, conventional ideas from other settings and combining them in new ways: like opera with jazz. Rather than invent a new musical each time, he borrowed the best from the past and then intertwined new dialogue or songs.

That combination methodology was later studied at Northwestern University which reached the same conclusion: “The highest-impact science is primarily grounded in exceptionally conventional combinations of prior work yet simultaneously features an intrusion of unusual combinations.”

Many of the examples in Duhigg’s book involve patients that have lost motivation or energy. He then looks at scientific studies on areas of the brain where functions like self-control are regulated. What is fascinating are the links.

In one study of computer gaming, participants had to choose between playing themselves or having computer-generated options. “When people were allowed to make their own choices, their brains lit up . . . they showed the neurological equivalents of anticipation and excitement.” But during those rounds where participants didn’t have any control, when the computer made the choice for them, people’s striata (an area of the brain that acts as the central dispatch for signals) was essentially silent. The findings support the need for giving people control over decisions to fire up their motivation—something with enormous potential implications for the elderly who struggle with independence.

The Value of Culture

Inside Google, the author finds the People Analytics Group that studies how employees spend time and why certain managers are more effective than others. The conclusions support another key tenet of productivity: the culture of an organization—its group norms.

How the leader creates a team spirit is critical to unleashing productivity and motivation. “Productivity is about making certain choices in certain ways . . . the sense of community we build among teammates, the creative culture we establish as leaders. These things separate the merely busy from the generally productive.”

Other topics around productivity in the book include how data is used in daily life and the role of automation and new technology in spurring or deterring productivity. If there is one criticism of Smarter Faster Better: The Secrets of Being Productive in Life and Business is that there is almost too much material for one book. To get really smarter, faster, and better, you have to read the book many times to unpack all the layers and levels.

In the end, a key takeaway comes from the author’s summation that “Productivity is the name we give our attempts to figure out the best use of our energy, intellect and time as we try to seize the most meaningful rewards with the least wasted effort.”

This book is a good use of time. Whether or not it will allow you to manage something with greater effectiveness and reward and feel productive is a personal calculation. What Duhigg gives you are stories and tools to get started.