On the Road in Trump’s America: A Journey Into the Heart of a Divided Nation 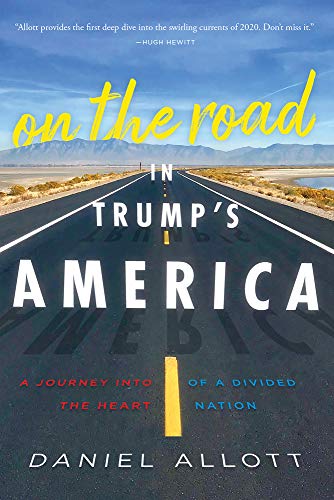 Americans have stopped listening—to each other and to their institutions. On the eve of one of the most important presidential elections of our time, the capacity to hear citizen voices above the din of social media and the chattering class is near impossible. Divided and depleted, we are trying to make sense of our fellow Americans and make decisions on how to move forward amid a global pandemic, a faltering economy, and deep feelings of mistrust. But how do we understand the politics of today if we don’t really know the people behind the votes?

Into that information void comes a timely and powerful book by journalist Daniel Allott, On the Road in Trump’s America. From the first sentence the book strikes a new tone:  “An essential part of a journalist’s responsibility is to listen, observe, ask good questions, and then listen some more.”

In the spring of 2017 Allott left his position at a Washington, D.C., political magazine to venture into the heart of America and spent three years looking at nine U.S. counties that were critical to understanding the 2016 election. He spends time listening to people who voted for Trump to help us understand what they were thinking at the time and what they might be thinking now.

Meet Carla Johnson, a 45-year-old lab technician and lifelong Democrat from Cresco, Iowa, who voted for Donald Trump in 2016 because she liked his approach on immigration, the economy, gun control, and his defense of traditional religion. She is one of many locals Allott interviewed in Howard County, Iowa, in the rural Upper Midwest of the country. What he found were people willing and eager to talk about their embrace of cultural conservatism and to explain how their views of American politics evolved as they watched the economy falter.

We’ve always known the importance of the economy on voters, but Allott takes it to a granular level. “Crop prices, grain, livestock prices,” says one farmer. “We’ve lost a dollar-and-a-half on the bean and seen a drop on the corn in the last month,” says another. As a reader, you are tempted, going into the book, to bring mistaken ideas about farmers—like they must hate Trump’s tariffs. What Allott discovers is that for the most part, there is a sense of relief that President Trump was pushing back against other countries’ unfair trade practices. Rural America likes what they’ve seen on his trade agenda. One Iowan tells Allott that he voted twice for Obama before turning to Trump in 2016, complaining that he could not find a Democrat worthy of supporting.  What we learn is how issues like impeachment, the Supreme Court, and even the coronavirus matter very little to many parts of rural America and how committed many of the Trump voters remain despite the virus.

In Trempealeau County, Wisconsin, nestled among the rolling hills of the Upper Mississippi River, Allott introduces us to white, churchgoing, employed voters, many of whom also switched to the Republican Party when Trump ran. Their view of racial inequity seems almost divorced from the national realities of prejudice and discrimination by virtue of the demographic makeup. It is, frankly, as if Black America barely exists in their minds.

The same is not true of Hispanic voters. In the book you meet Ramon Romero who doesn’t remember the first few years of life, other than carefree days climbing mango trees in Honduras but is now a DACA recipient (Deferred Action for Childhood Arrivals) and fearful of his status under President Trump. And yet, at a time when rural towns are disappearing, immigrants are welcomed as they are extending the life of these communities, making it hard to reach broad conclusions on how Donald Trump really fares with Hispanic voters.

In each chapter, in each county, you will be surprised by an America we may not really understand.  From Orange County, California, to Grant Count, West Virginia, we learn of the yawning gap between Republican places and Democratic places. We get a window into conservative thought that even Fox news might miss like the public health crisis, the drug epidemic, fears about the national debt, and a desperation that pervades the lives of citizens, as well as the power of things like prayer, and the Pledge of Allegiance which are sometimes invoked as an answer to COVID-19.

But what is most potentially informative in Allott’s book is how deeply committed to the president, Trump voters are. “With rare exceptions, those who supported him on election day 2016 still support him today, and the same is true of those who oppose him. That’s not to say that people’s views of the president have not changed: but where they have changed, the change has all been in one direction—toward a more extreme and more deeply entrenched conception of the president.”

What Allott’s book tells us, that, perhaps we already do know is how increasingly tribalistic American politics has become and how little listening is happening between factions.  And we are reminded that among the most distrusted institutions is the media.

The book is a window on Trump voters we rarely get and it will challenge your thinking. Most critically, it reminds us that old-fashioned reporting is still possible and meaningful as we await the results of next week or whenever we know its outcome.