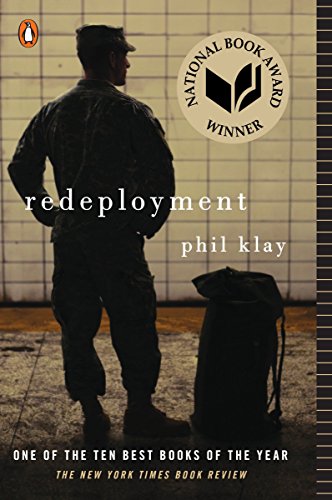 For months he stood over me—a lone soldier in a silhouette. From his place on my nightstand, he would stare at me from the book’s cover with its drab, beige background, and its mind-numbing grid against which that lone soldier and his backpack stand.

Something held me back from opening Phil Klay’s book Redeployment when it first appeared in March 2014. Having covered war as a news producer stationed at the Pentagon years ago, and as someone whose career has been in foreign policy and peacemaking, I am no stranger to war stories. But something stopped me from picking up a “fictional” account of the lives of soldiers stationed in places like Faluja and Mosul.

Maybe it was the timing. By the time of the release of Redeployment, President Obama had announced the withdrawal of all U.S. combat forces from Iraq. It felt like we were finally winding down a long war that had begun with “shock and awe” and ended like a book without a real final chapter. Iraq was behind us. Yes, I knew all about PTSD and the scandal over healthcare for veterans and the stories of suicides and the strains on military families. But weren’t we moving on now?

The reason you should get hold of Redeployment is that the soldier on the cover of the book has not moved on. Iraq has not gone away. Indeed, over the past year, Iraq has come back into our public viewfinder—images last summer of Yazidi men, women, and children, trapped on a mountain in Iraq and U.S. personnel rescuing them; Iraqi towns overrun by ISIS forces. Terrorist attacks in Europe, beheadings and violence emanate from Iraq and Syria, while U.S. and allied aircraft are dropping bombs looking for terrorist targets. Kurdish fighters are storming Mosul, and American trainers are teaching them how to fight.

Now is the moment to read a kaleidoscopic book by Phil Klay, a Dartmouth graduate, and a veteran of the U.S. Marine Corps who served in Iraq during the famous “surge,” and has written not so much a book as a guided tour through the underground of the war in Iraq.

Whether you have ever served in combat or simply worried about our nation’s destiny, you will find something in Redeployment to keep you up at night—struggling to make sense out of America’s engagement in a complex part of the world that has suddenly become relevant, again.

“We shot dogs,” is how the first chapter opens. “Not by accident. We did it on purpose and we called it Operation Scooby,” says one of the first-person narrators as he remembers his deployment. (There should be a warning on the book. Redeployment spares the reader no detail—no matter how small or ugly and it makes no apology for unnerving the reader.) In this first chapter, perhaps the strongest of the stories, the soldier is returning home and trying to reintegrate into American society. “When I got to the window and handed in my rifle, it brought me up short. That was the first time I’d been separated from it in months. I didn’t know where to rest my hands.”

Not only does a returning soldier not know where to rest his hands, he has trouble resting his mind. “The problem is, your thoughts don’t come out in any kind of straight order. . . You try to think about home, then you’re in the torture house. You see the body parts in the locker and the retarded guy in the cage.”

Each chapter in the book is another detailed dive into a dirty, dangerous, and deadly conflict—not only for soldiers but for civilians, chaplains, and families. You learn things about war you never knew like that war is about math. “Each gun only fired two rounds . . . Platoon- sized is like forty. Figure six guns, so divide and you got, six, I don’t know six people per gun. We killed exactly 6.6. people . . . that’s like a torso, and a head.”

Phil Klay doesn’t leave you on the battlefield. You come home with soldiers and civilians to pick up the pieces of war after long periods of rehabilitation at home. “They had to move muscles around and sew them together to cover exposed bone, clean out dead tissue, and seal it with grafts. They take, well, what’s basically a cheese grater to some of your healthy skin and reattach it where it’s needed.”

To be honest, the book does sag a bit in the middle, perhaps intentionally so, as war and recuperation can be boring and slow. Also, the vocabulary of soldiers is pretty vulgar. I found myself tiring of the litany of words beginning with “f” and ending with “k.” War also has its share of acronyms like “SAF attack,” “EODs,” “IED,” “cammies.” The author should have added a dictionary with definitions of “CERP,” “MAW,” “SSTP,” “AZD,” and the full lexicon of war.

Redeployment is recommended for those with a conscience. Redeployment is tough but important. It is a book about going to war and coming home. “Getting back feels like your first breath after drowning. Even if it hurts, it’s good.” What is important about reading it is the chance to meet soldiers and civilians—people you see on a daily basis in the metro or walking down the street and think about them in different, more humane way. Finishing the book will make you feel like “mission accomplished.” You are tired, moved, and motivated to pay attention to what is happening at home and abroad because it is all about us.