The Dogs of Littlefield 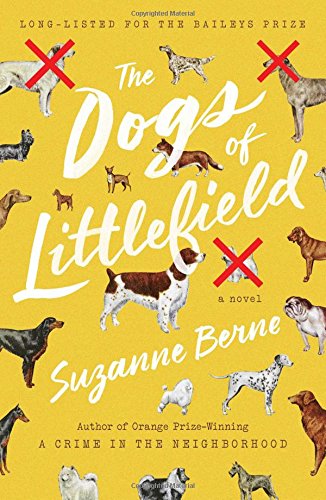 You don’t have to be a dog lover to love books about dogs—especially when the book is well written and has a good plot. If you enjoy dogs, as most people do, you will identify with the dogs of Littlefield.

Suzanne Berne, who won the Orange Prize, for her first novel A Crime in the Neighborhood, welcomes readers to the suburban town of Littlefield, Massachusetts, where something is terribly amiss. Dogs are mysteriously dying in a local park that has become the center of a town controversy.

What sounds like a very unpleasant subject for a story becomes a mystery with interesting characters, including the dogs. Berne’s style of prose captures details of ordinary life in small town America in a compelling and captivating way.

“From eight to ten on most weekday mornings the meadow between the soccer field and the community gardens fizzed and boiled with dogs—dogs chasing other dogs; dogs running in circles; dogs digging, barking, eating grass, sitting and staring, apparently at nothing.”

When the main character, Margaret Downing, is out for a stroll in Baldwin Park, with her dog, Binx, a black Lab, she happens upon the first dog victim. Margaret’s world is upended, both by witnessing this first doggy death, and by her failing marriage to Bill Downing, and what soon becomes a complicated relationship with the dead dog’s owner, George Wechsler. Beware that within the first 50 pages, three more dogs are poisoned after Margaret’s first discovery of George’s dog. “A Bellingham terrier, a rescued greyhound, and a malamute named Violet that was a registered therapy dog and visited bedridden residents at Avalon Towers.”

Dogs dying is one dimension of the story. Another layer to the plot is the presence of a visiting sociologist, Dr. Clarice Watkins, who has arrived to study this small town’s “good quality of life,” only to discover that terror has struck the residents (and their pets.)

Watkins, an African-American professor, hopes to observe the rituals of ordinary life in what becomes a not very ordinary place. “The goal was to blend in with the local population, difficult in her case.  Aside from a scattering of black faculty and students at the college, the only black people she had encountered in Littlefield so far had been a cashier at Walgreen’s, a bagger at Whole Foods, a small covey of Metro children descending from a school bus in front of the elementary school, and two young men in coats and ties who were going door to door with copies of The Watchtower.”

The dogs become the “tale” of sentimentality in suburban America where “Christmas lights were blinking from a few store windows though it was still a week before Thanksgiving. A cardboard turkey with a burnt-orange, accordion-pleated tail had replaced the basket of daisies atop the anvil in the café’s window. Soon enough the turkey itself would be replaced by a white plastic Christmas tree sprayed with glitter and decorated with frayed green and red silk balls, but for now the turkey kept a beady vigil as passersby walked back and forth.”

Watkins becomes the chronicler of suburban life gone mad. “I am afraid, she wrote, that the population, which I was counting on to be contented, is instead becoming frightened.” Through town hall meetings and encounters with the locals, Watkins exposes us to the varied nature of human and animal life in vivid colors.

This is a book, pardon the pun, with bark and bite. It is quietly scathing about suburbia, with its gossip and giddy shallowness. Arguments over leash laws become heated and hollow. Behind white picket fences and happy talk are unhappy people with lives full of loss.

The Dogs of Littlefield is not high literature. Suzanne Berne is not Sherlock Holmes. But for a January read, as you return from an evening walk with your dog, it is a good companion that will keep you guessing and amused.