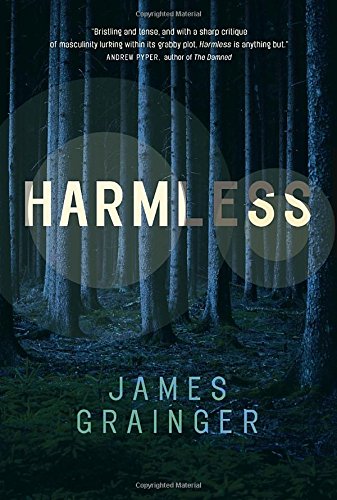 “If you are looking for a Thomas Hardy-like adventure story with profanity, pornography, and passion, you will find it . . .”

This is not a harmless story.

James Grainger’s new novel Harmless is a toxic mix of lust, love, and rage—a story about the violent consequences of unchecked emotion. Set in the wilderness, the novel starts out as a typical family reunion story but evolves into a dark and bitter tale of dread.

Buckle your seatbelt. The first few sentences of Harmless are calm and inviting. “They made a nice picture: Franny and Rebecca, walking through the high grass in the July sun, the forest in the background, the bright blue sky above. Franny and Rebecca, friends since they were babies, keeping to a languid, almost liquid pace impossible for anyone but an almost-fifteen-year-old to maintain.”

The gathering of old friends and families at a remote farm is supposed to be fun for Franny and Rebecca but turns into a disaster when the girls disappear.  Franny’s father, Joseph, and Rebecca’s father, Alex, once best friends, find themselves locked in mortal combat as they search for the girls in the vast forest. As the plot unfolds, the novel is less about Franny and Rebecca and more about their parents and the psycho-drama of emotional entanglements.

Grainger’s writing is powerful and pungent. Joseph’s memory of his first spouse, Martha, sets an early tone of failure and the ugliness of divorce in biting sarcasm and metaphor. “Martha withdrew his hand, and the sordid history of their break-up lay on the table between them like a platter of freshly eviscerated entrails: his wavering commitment to their marriage; his refusal to ‘prostitute’ his talents and settle for a nine-to-five job; his inability to quantify what he provided in place of financial and domestic stability.”

Joseph had embarked on this weekend with his daughter and friends to redeem himself—to save his relationship with Franny. But raw sex and rambunctious behavior mar the occasion, and what follows is a dangerous trek and a deadly search for the girls in a forest that Grainger takes great pains to describe. “They were passing through a stretch of trees, stunted by an infestation of wild grapevines as thick as ship’s rope, the trees bent and twisted as if collectively frozen in the midst of a violent attack.”

At times you wish the author would spare us some of the gory details such as the slaughter of the search dog, Taylor, by coyotes, “strewing his intestines as far as the organs’ length allowed.”

At times Harmless leaves you as distraught and dislocated as the characters. “It was that sensation of tripping over a root in a dream and jerking awake in bed, of falling out of one world and landing roughly in this one.”

If you are looking for a Thomas Hardy-like adventure story with profanity, pornography, and passion, you will find it in Harmless. But if you want a good old-fashioned family saga with “G” rated content, this is not it.