A Cure for Suicide: A Novel 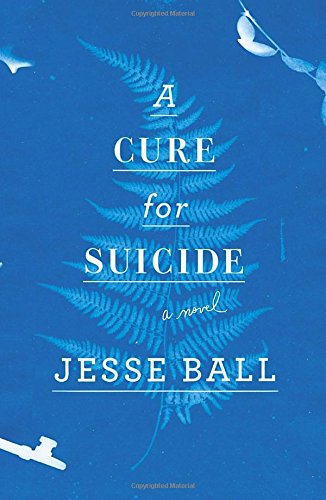 Jesse Ball is a master of dialogue, having authored four previous novels, including Silence Once Begun, and Samedi the Deafness. He teaches in the School of the Art Institute of Chicago’s MFA Writing program.

The plot of A Cure for Suicide is tough to grasp. The narrator, also known as the “examiner,” is teaching her male “patient” how to re-enter life, having experienced some near-death experience. All you really need to know is that the characters are on a journey together that feels more like a psych experiment than a real life encounter.

You meet a man, the “claimant,” recovering from some odd disease of the mind, and a woman administering care as she prods him back into “reality.” There is a doctor-patient relationship in this rather odd setting of a “village” with overtones of a medical cult.

You are right to be thinking: So what is Jesse Ball writing about in this non-scientific, fictional story of people living in a small village where the woman is an “examiner” and her male companion a “claimant” and how does suicide factor into the storyline?

The events are less important than the theme—which is “choice.” From the first sentence, it is clear that the reader (and the characters) need to learn some very basic life lessons. “This is a chair,” said the examiner. A person is made in such a way that he can sit where he likes. He can sit on the ground . . . or even on the table itself.”

Chairs and tables become metaphors in this complex novel for hard questions about where one sits in life—literally and figuratively. In many ways, Bell is echoing the philosophical thoughts of Bertrand Russell who asked, in his famous essay, “Appearance and Reality,” whether or not we really know if a brown table is either brown, or a table.

Jesse Ball is writing about questions and choices. As the novel unfolds, the questions for the male “claimant” grow more difficult and less stark as he confronts harder choices, noticing that “the road goes in two directions” and that people you meet along the road may or may not acknowledge you. “Oh, that’s what people do,” the claimant explains to the man about why another man has chosen to ignore him. “He was just returning to the little world he inhabits when no one’s around,” adding an important life lesson, “what you need to do is discover where such junctures lie.”

Life’s lessons and choices animate the novel in, at times, a frustrating, seemingly random way. It is as if Bell is Jean-Paul Sartre and the reader has No Exit. In mapping life, Bell reveals to his characters all the glories and disappointments of existence. “Sometimes a task would be terribly difficult—terribly, terribly difficult, and the man would cry. He would sit down on the floor and cry.”

The novel is also about grief. It addresses loss as something natural and expected. “All bonds are conditional,” the woman tells her patient. She counsels him not to overly imbue things with memory—a lesson restated later by another man, the “interlocutor,” who argues that “memory is not the heart of the endeavor. That is the human secret. Forgetting is the precious balm that helps us to travel on, past the depredations of memory.”

The book prompts a conversation about life—how we enter it, how we navigate its shoals, and how we exit it. At some point the novel does wrestle with questions of assisted suicide and “death with dignity,” but it takes a long and torturous route to get there.

In the end, this is not a book for the faint of heart, and one could be forgiven for choosing not to endure it. Then, again, as Bell says, “it is one choice, a choice you can make.”