Did You Ever Have A Family 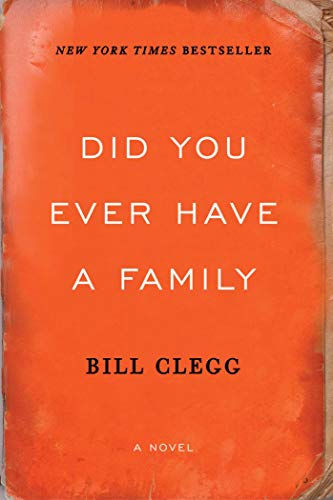 “The uplifting themes of this novel are around forgiveness, community, and compassion, although they are eclipsed and outweighed by heartbreak.”

Bad things happen in good books. It’s partly the reason we read fiction—knowing that life is hard, and tragedy is inescapable, but much more tolerable when you can close the book and walk away.

But there should be a limit to how many bad and sad events can take place in one novel; a sort of sadness quota. If that existed, Did You Ever Have a Family would exceed the quota.

To be fair, the author, Bill Clegg, warns of impending disaster in the book jacket.  In fact, the disaster has already occurred, and the reader is well prepared by the title to expect a downbeat story about the death of an entire family in a blazing fire early in the novel. In the morning hours of her daughter’s wedding day, June Reid’s family—her boyfriend, Luke; her ex-husband; her daughter Lolly; and Lolly’s fiancé, Will—all perish. What could be worse than a morning of mourning?

As the sole survivor, June Reid crosses the country in a catatonic state of depression. She drives from grief and tragedy in the faint hope of finding solace where her daughter once stayed. June describes herself, in that raw state of mourning, as “untouchable.” “Not from scorn or fear, but from the obscenity of the loss. It was inconsolable, and the daunting completeness of it—everyone gone—silenced even those most used to calamity.”

June’s journey should be enough sadness for one story. But Clegg doesn’t stop there. Chapter by chapter, he introduces characters experiencing equal or greater grief, if such an emotion can even be measured.

Luke’s mother, Lydia, has also known sadness, not only by the death of her son in the fire, but by an earlier life of poverty, broken relationships, and disengagement from Luke until June Reid came into the picture. Lydia’s story, alone, could be a novel and her plight would be enough to make you cry. “Alone and home is where Lydia has been the most during the last six months since Luke died. She walks to the coffee shop, after lunch most days to get a break from the television, which has become like a full-time job.”

Two lonely, depressed mothers is my limit. But Clegg has no such rule. The people in the small town where June Reid live are reeling from the disaster. Rick, a friend of Luke, is crying in his mother’s driveway. Edith, who was due to cater the wedding, can’t fathom the loss. “No one ever accused me of being a soft touch, but when something like what happened at June Reid’s that morning happens, you feel right away like the smallest, weakest person in the world.”

Along the journey there are tender moments and traces of hopeful second chances as June meets kind and generous strangers. Yet even with those small rays of light, Clegg introduces more death. Rebecca, who works at the motel where June stays, has a friend, Penny, who was raped and strangled to death. George, who also ends up in a motel, has endured the loss of his wife to breast cancer. He is in town to visit his son, Robert, who is in a coma. You get the point.

Ordinary people with out-of-the-ordinary stories do sometimes become friends. Fortunately, there is Kelly, who works at the motel where June lives, and seems relatively unscathed by disaster; and Cissy, who manages to penetrate June Reid’s sadness by leaving her a thermos of soup each day. “Who knows what draws people together?” Kelly asks as she muses about June Reid’s lonely life in the motel. “Thank God that sad woman pulled up to our motel, and not some other godforsaken place. Thank God she has someone to look out for her. Thank God any of us do.”

The uplifting themes of this novel are around forgiveness, community, and compassion, although they are eclipsed and outweighed by heartbreak.

Did You Ever Have a Family should come with a box of Kleenex, or a towel to dab and mop up the tears it invites. The only saving grace about this book is that it makes you realize that things could be worse—you could be a character in the story.