In a Dark, Dark Wood: A Novel 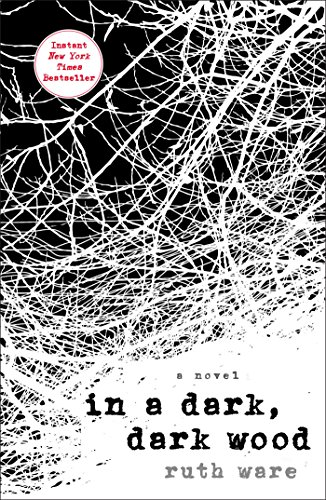 WARNING:  This book is hot. Do not pick it up late at night or if you are in a dark, dark wood.

Remember those days of sitting by a campfire telling ghost stories? That is the sensation you will have reading this new novel by Ruth Ware, a self-described former waitress, bookseller, teacher of English, and book publicist. It is an eerie and engaging tale about a reunion of classmates that turns into a nightmarish weekend.

The main character and narrator, Leonora, is a reclusive writer who, reluctantly, accepts an invitation to a pre-wedding “hen” party in honor of an old classmate she hasn’t seen in a decade. The gathering of old and new friends becomes 48 hours of hell when memories and secrets, long buried, are exposed.

Exposure is the key theme of this mystery. Leonora Shaw does not like people nor exposure. But she is deeply curious about her old friend, Clare, and agrees to drive to a remote location with a mutual friend, Nina, to join the gathering.  Leonora and Clare have both loved the same man—James, their mutal childhood sweetheart. That fact, alone, leads to this painful reunion as Lenora, an avid runner, is still running away from the past love affair with James, and Clare is still relishing winning James, her future husband.

In a Dark, Dark Wood grabs you from the first sentence: “I am running. I am running through moonlit woods, with branches ripping at my clothes and my feet catching in the snow-bowed bracken.” It is unsettling to run in the dark and unsettling to read about it.

Exposure and light, like the trays of chemicals in an old-fashioned darkroom, allow the grainy images of Ware’s plot to form into a cohesive photograph. Exposure and revelations permeate the story. For openers, the “hen” party takes place in a glass house facing dark woods. “There was something strangely naked about it—it felt like we were in a stage set, playing our parts to an audience of eyes out there in the wood.”

What begins as an adventure quickly turns dark. “I shivered. I must stop being so suspicious. This was a beautiful house—we were lucky to be staying here, even for just a few days. But I didn’t like it.”

As the party weekend unfolds, the plot unfolds with twists and turns that leave the reader wondering who, in this gathering, is motivated to create havoc—or worse. Is it Clare, the bride-to-be, who has sinister intentions?  Is it “Flo,” the organizer of the event who is up to no good? Is it possible that the only male at the party, Tom, is a bad actor? Like a written version of the game Clue you just don’t know who to suspect in which room.

To really throw the reader off course, partway through the novel, Leonora wakes up in a hospital bed. Is that real—or imagined? Perhaps the narrator, Leonora, has her facts mistaken with memory. “The events of the day swirl and pound inside my head, mixing themselves up, tangling themselves together, the truth with the lies.”

Like an Alfred Hitchcock film, there are subtle clues of impending danger: a polished gun, the glass of the house shattering, the absence of any cell phone connectivity at the location, and a game in which the word “murder” is mentioned. And there is that constant darkness. “The night was drawing in, and the house felt more and more like a glass cage, blasting its light blindly out into the dusk, like a lantern in the dark. I imagined a thousand moths circling and shivering, drawn inexorably to its glow, only to perish against the cold inhospitable glass.”

Ruth Ware has a gift. This British author’s first foray into fiction is a hit. Despite the fact that the novel has little intellectual heft, it delivers a punch and keeps you guessing—an ideal August psychodrama that reminds us why mysteries remain such fun—except at night.