The New Threat: The Past, Present, and Future of Islamic Militancy 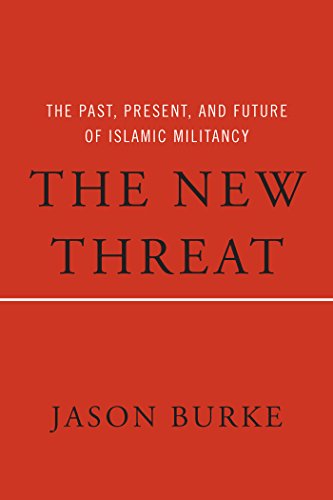 “A good primer on Islamic militancy for anyone who lives anywhere in the world today.”

When it comes to book publication dates, timing is everything. The New Threat by Jason Burke arrives just as President Barack Obama is upping the ante on how America is countering the threat from ISIS in Iraq, Syria, and the region. U.S. Special Operations forces will now be deployed to northern Syria as extremists continue to de-stabilize the Middle East, hundreds of thousands of refugees are streaming out of conflict zones into Europe, and military and political action to deal with militancy continues. Into that vortex comes another exploration about why we are living with terrorism today.

Jason Burke has no shortage of company when it comes to books about Islamic extremism. But what makes this one different (and more readable) is Burke’s journalistic background—reporting for The Guardian and The Observer from throughout the Middle East and South Asia. Voters and readers should devour this study of the rise of Islamic militancy today, given that Americans and others will continue to have their lives threatened by terrorism. If nothing else, we can be intelligent observers.

The book opens in Mosul, Iraq in June 2014 when black flags signaled the arrival of ISIS into an Iraqi city that quickly found itself overrun by militants. The poor response of Iraqi forces signaled the seriousness of the threat and left the terrorists in control of oilfields, tanks, artillery, and land. Burke underscores the centrality of this event. “All in the heart of one of the most strategically important bits of real estate on the planet.”  He likens the assault on Mosul to a post 9-11 strike that provided a wake-up call about aspirant extremists not seen in that region since the U.S.-led invasion of Iraq in 2003.

In a well-researched, measured way, Burke lays out the historic and current landscape of the many disparate, dynamic, and dangerous Islamic State players.  In easy-to-understand language, he explains that “there are freelancers, lone wolves, stray dogs, self-starters, clean-skins, leaderless networks, cells . . . all of which have the power to cause harm.”

In dissecting the chaotic groups, Burke defines the roots of Al-Qaeda, the Islamic State, leaders and individuals, including the so-called “lone wolves.” In a new twist, he questions the notion of a “lone” wolf, not being connected, in some fashion, to social media, group pressures, and extremist cultures. “The truth is that terrorism is not something you do by yourself.”

In tracing the roots of Islamic terrorism, Burke harkens back to the 1960s and 1970s in the growth of militancy that peaked with the 1981 assassination of Egyptian President Anwar Sadat—carried out by hardline extremists motivated by a wider plan to confront the world’s non-believers, and to create “a perfect, just Islamic society.”

Burke unravels the long history of divisions within groups dating back to the disagreements over who should succeed the Prophet Mohammed on his death in Mecca in 632 CE. That unresolved succession plan, according to Burke, is often credited with the early schism between Sunni and Shia Muslims—something that went unresolved in the artificial drawing of Iraq’s boundaries by the British.

Most students of history know these historic events but Burke puts them into the modern day context of how sectarian divisions lead countries to fragment and fight, leaving a state’s political and social fabric in ruins.

As a journalist, Burke understands the media and its powerful role in the rise of terrorism.  He reminds us how Bin Laden used propaganda, and how today’s ISIS is using local, regional, national, and international messages to tailor their arguments to different groups depending on the need to recruit, rally, or reassure. He has good material on the use of ISIS of new media like crowd-sourcing and Arabic-language apps.

The New Threat does not shed much new light on the basic goals and objectives of Islamic militants; namely to create a caliphate that allows Muslim believers to heal the perceived damage of Western dominance. But he threads the disparate elements of that strategy together to explain where its proponents think it could lead. “This new Islamic superpower would rival the US in political, military, and cultural force and thus restore the rightful order of world affairs and the fallen honor and dignity of all Muslims.”

According to Burke, the militancy is fueled, in part, by a “youth bulge” that provides a recruitment base of young, frustrated citizens of other countries who experienced a surge of hope and excitement after the Arab Spring only to see those hopes dashed by the slow pace of democracy and the uneven dividends of globalization. Burke gives, in my view, short shrift to the valiant efforts of young peace activists—the “Generation Change” agents who are challenging the status quo.

This book makes an important contribution to the ongoing effort of writers and journalists to bring news and insight into the global assault on our values, freedoms, and lives. It is a good primer on Islamic militancy for anyone who lives anywhere in the world today. Sadly, The New Threat is likely to be followed by many more useful writings on terrorism, extremism, and modern-day militancy.