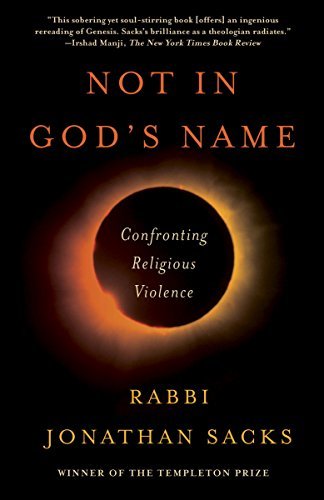 Socrates and Rabbi Jonathan Sacks would have gotten along famously. They both love to ask hard questions. They are teachers and scholars ruminating about cosmic issues. (Socrates once asked: “What is wisdom?”) Both men face difficult moral issues with candor and careful reflection.

Although Socrates is no longer around to answer tough questions, Jonathan Sacks is very much alive and well—on television, radio, in print. A global religious leader and the award-winning author of more than 25 books. He teaches at universities in Britain, the United States, and Israel, and he is a frequent and respected contributor to the dialogue concerning religion around the world. Rabbi Sacks holds 16 honorary degrees and has received many awards in recognition of his work, including the Jerusalem Prize. And just in case you doubt his religious credentials, he served as Chief Rabbi of the United Hebrew Congregations of the Commonwealth from 1991 to 2013.

Not in God’s Name is not a book you “read” in the traditional sense. Book reviewers do not have the luxury of thumbing through literature, but readers can be forgiven for skimming and skipping around this important, but dense, work on the timely subject of religious extremism and violence committed in the name of God. (A frustration is the lack of an index despite the detailed notes and extensive bibliography.)

The book opens with a quote from French mathematician Blaise Pascal. “Men never do evil so completely and cheerfully as when they do it from religious conviction.”

It is tempting to question why humans of both genders are not included in that quotation, but given that Pascal lived in the 1600s, it can be understood. Sacks then writes in his very first sentence: “When religion turns men into murderers, God weeps.” At that point one is alarmed at the notion that women are not part of religious extremism. But Rabbi Sacks quickly reminds the reader of the fact that such a sentence about murder and God’s weeping comes from the book of Genesis in which God expresses his frustration at man’s behavior. “God regretted that he had made man on the earth, and his heart was filled with pain.”

Sacks does start at the very beginning—the genesis of violence—and leads the reader on a journey of its origins and dimensions. “Altruistic evil” is how Sacks explains the behavior of human beings. “We need a term,” he writes, “to describe this deadly phenomenon that can turn ordinary non-psychopathic people into cold-blooded murderers of schoolchildren, aid workers, journalists, and people in prayer.” He defines this “altruistic evil” as evil committed for a sacred cause in the name of high ideals. But then comes the punchline of the book: Sacks does not accept the notion of violence and its connectedness to religion as direct. “There is nothing specifically religious about altruistic evil.”

Where things get complicated is the circuitous route Sacks takes to disentangle evil and religion. History lovers will have a field day going from early Bible stories through modern times. Along the way you stop in Nazi Germany, Stalinist Russia, Mao Zedong’s China, Pol Pot’s Cambodia, and today’s Islamic State. Literature lovers and political watchers will love meeting up with Shakespeare, John Stuart Mill, Luther, and Henry Kissinger in the same book. This is a hard book to read without Google.

What Sacks is doing using the Socratic method is challenging key assumptions about religion and violence as natural bedfellows. “Religion leads to violence when it consecrates hate,” he writes. He gets around to ISIS and fundamentalist, extremist ideology by unpacking hate. “The world of radical political Islam is,” he explains, “awash with hate, above all with antisemitism.” In a fascinating, easy to miss sentence, Sacks acknowledges that those who push back against the relationship between Islam and violent hatred, are often Muslim and often women. “Indeed, the people who write most eloquently and critically about this are themselves Muslims, often women.”

The key takeaways from the book revolve around why we have religion and why it can be a source of hopefulness instead of a precursor to violence. “Religion has returned because it is hard to live without meaning. That is why no society has survived for long without either a religion or a substitute for religion.” What Sacks demands is a nuanced understanding of religion—particularly Abrahamic monotheism—and destruction of the false dichotomy between pure good and pure evil.

He also bemoans the loss of religious faith in the world today. “Losing its religious faith, the West is beginning to lose the ideals that once made it inspiring to the altruistic: reverence, loyalty, human dignity, the relief of poverty, public service, collective responsibility, national identity and respect for religious values while at the same time making space for liberty of conscience and the peaceable co-existence of more than one faith.”

As for ISIS, it does get what it deserves in In the Name of God. Sacks calls it as he sees it. “What drives ISIS and its kindred organizations is the restoration of the Caliphate and the return to its rule of all the lands it once controlled from Israel to Spain. These are political objectives. They have nothing to do with the God of Abraham.”

In the end, the book is more a compilation of the speeches, sermons, and writings of a very learned scholar than a new book covering new issues or theories. But you cannot escape learning from these words and ending up with many questions, some answers, and a feeling that maybe we do need to have faith without the confluence of violence and hatred. As for solutions to religious violence, Sacks is convincing on the important idea that violence cannot be explained nor justified “in God’s name.”