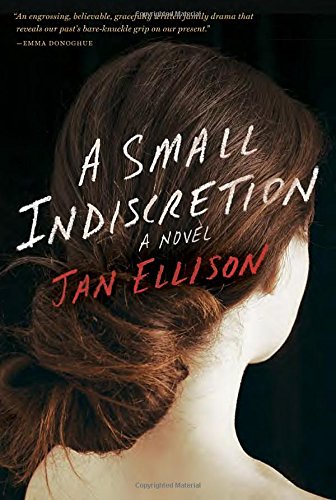 To read A Small Indiscretion is to eat fudge before dinner: slightly decadent behavior, highly caloric, and extremely satisfying. Jan Ellison’s first novel is an emotional detective story with every human layer laid bare for readers to dissect and digest. The result is a book that while devoid of any political, economic, or substantive content is so personal as to invite scrutiny of our own thoughts, actions, memories, and behavior.

The main character, Annie Black, is a 42-year-old everywoman whose life comes crashing down when a car accident leaves her college-aged son in a coma just as her marriage is disintegrating. “It is not always wise to assume that just because the surface of the world appears undisturbed, life is where you left it,” Annie writes in what becomes her diary and letter to her son, Robbie.

But don’t panic. The novel is not a manipulative tearjerker. It has a logic and a rhythm that mirrors real life in ways that surprise and inspire. It forces to the forefront the images and ideas we have locked away as memory. “Now the story becomes more difficult to set down,” Black writes in letter to her son. “Now it becomes necessary to distinguish between the lore and the truth. To disentangle the version of events that’s made its way into dinner conversation over the years—becoming a matter of public record—from the truth.”

Annie is looking back at her early romances and flirtations—particularly her experiences in London working for Malcolm Church, a British businessman through whom she meet his wife, Louise, and Patrick, a young photographer living with them. When she meets Patrick she is captivated, yet cautious. “His lean body and long legs and long, thin hands. His narrow green eyes and dark, curly hair and marbled skin. His full pink lips . . . He was not handsom—his face was too pale and his ears were too large and he was too thin—yet by the time he reached us, the lens through which I’d perceived the world of men had been altered.”

The relationships in the story become intertwined in a complex web of intrigue akin to any good mystery. As Annie’s son, Robbie, recovers, Annie’s other children, and her husband, Jonathan, are picking up pieces of shattered glass and dealing with loss and longing. Annie’s own parents, who come to help, have their sadness. “Parents,” Annie writes. “It’s a word whose meaning one does not think to interrogate until one must.”

All the clues of how we live and stack up personal memories are hidden throughout this book, including a few small “indiscretions” that leave many of the characters hurt and confused.

Jan Ellison, an award-winning short fiction writer, has a talent for description and an art of showing all sides of people, reminding us that human beings are constantly changing. Therein lies its magic.