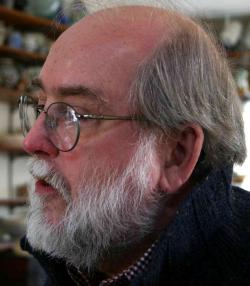 Jonathan Rickard got his first job in advertising at 19 after his freshman year at the Massachusetts College of Art, Boston, but continued on to receive a BFA degree in graphic design. After 44 years of changing technology with advertising agencies, culminating with partnerships in two marketing, advertising, and public relation firms as executive creative director, he was crippled by multiple sclerosis and left the field to open an antiques shop in Connecticut.

In a second parallel life, Mr. Rickard collected American folk art and British pottery of the 18th and 19th centuries made for the American market. This led to studying ceramic history at universities in Staffordshire; writing for The Magazine Antiques, Maine Antique Digest, the annual journal Ceramics in America, and other antiques publications; and developing exhibitions as guest curator at Colonial Williamsburg, the Brandywine River Museum, and other venues. He wrote and designed a book on antique abstract pottery, which was published by the University Press of New England in 2006.

After recovering the ability to walk, Mr. Rickard studied writing at Wesleyan University with Anthony Valerio and is a member of a writers’ workshop in Middletown, Connecticut, where he is finishing work on his first novel. He lives in an 18th century house near the Connecticut River and Long Island Sound.

The Blue Guitar: A novel

“Why is it life’s surprises are nearly always nasty, and with a nasty comical edge, just for good measure?”

Hold Still: A Memoir with Photographs

A God in Ruins: A Novel (Todd Family)

Kate Atkinson is a brilliant novelist, an historian, a tease, a practical joker; she’s empathetic, adventuresome, erudite. By now she's also probably quite wealthy . . . and with good reason.

Given a large (9 3/8” x 13”) page size, this very attractive compilation of contemporary art—drawings on paper—provides an excellent review of a medium that is too often overlooked.

“a depth of feeling. A quiet passion. Many believe that Jim Harrison is one of our greatest living writers. No argument here.”

The Sibley Guide to Birds

“For many The Sibley Guide to Birds will become the first point of reference.”

“If Jim Harrison or Brown Dog are new to you, Brown Dog: Novellas is a marvelous way to meet them both.”

Life After Life: A Novel

“Readers will be torn by the impulse to race ahead while simultaneously savoring the fine writing.”

Drinking with Men: A Memoir

“. . . the thrust of Rosie Schaap’s memoir has to do with the title of the book: drinking with men.

News from Heaven: The Bakerton Stories

“This is the work of a skilled storyteller—a writer in control of her craft.”

“It’s that sense of real life flowing in a fast-cutting cinematographic style that elevates this novel into a new genre.”

All I Did Was Shoot My Man

“There’s no need to tell an abbreviation of Walter Mosley’s story here. If the reader wants a complicated and well-told mystery, it’s here.

The Map and the Territory

“This is an important literary occasion. . . . The Map and the Territory by Michel Houellebecq is one of the rare books that merits and rewards a second reading.”

“Ceramics in America concludes with short papers on recent discoveries and reviews of recent pertinent publications.

“Mr. Libman has created literary quicksand. And his stories are sinking.”

With Needle and Brush: Schoolgirl Embroidery from the Connecticut River Valley, 1740–1840

“This is the kind of history that doesn’t appear in textbooks. . . .

How to Stop Loving Someone

“Joan Connor loves words. . . . The cover of this book fails to suggest the riches within.”

Life Itself: A Memoir

The Opposite of Art: A Novel

This is a novel filled with contrasts: stilted writing vs. elegant prose, existential thought vs. Christian beliefs, selfishness vs. generosity, accuracies vs. inaccuracies. Mr.

The Boy in the Suitcase (A Nina Borg Novel)

Perhaps to capitalize on the enormous success of the Stieg Larsson trilogy, the publisher Soho Crime is introducing The Boy in the Suitcase by Lene Kaberbøl and Agnete Friis.

The Rape of the Muse

“The Rape of the Muse is a novel of many depths. There is excitement, rumination, eroticism, and intrigue. It is a strong study of character and of the importance of integrity.

Deliriously Happy: and Other Bad Thoughts

“Had this collection not been packaged as it is, the reader might feel rewarded at some of the cleverness, but if you’re looking for truly funny, there’s a strong probability you’ll be disa

“Altogether, this is an admirable work of fiction, a compelling story told beautifully.”

“The characters are well developed and the geography is, at times, cinematic, particularly the weekend or summer place in Connecticut that becomes like another character.”

PEN/O. Henry Prize Stories 2011: The Best Stories of the Year

Lowestoft is a city on the east coast of England most noted for its production of fine porcelain in the 18th and 19th centuries.

A read through this rather gentle, inquisitive look at small-town weekly newspapers could be beneﬁcial to your health. It may even lower your big city blood pressure.