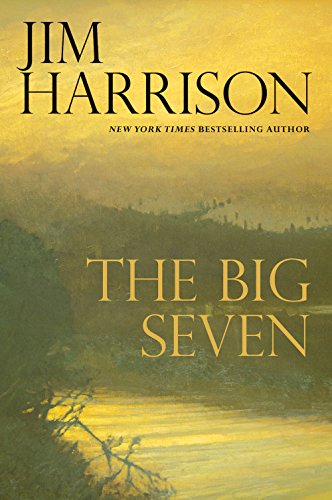 “a depth of feeling. A quiet passion. Many believe that Jim Harrison is one of our greatest living writers. No argument here.”

Jim Harrison is the author of 36 previous books of fiction, poetry, and nonfiction, including Legends of the Fall, Dalva, Returning to Earth, and The Road Home. A member of the American Academy of Arts and Letters and winner of a Guggenheim Fellowship, Harrison lives in Montana and Arizona.

This novel features the character, Sunderson, who was introduced in Harrison’s previous novel, The Great Leader. It’s not readily apparent that Sunderson, as he is referred to throughout the novel, has a first name. Here he is fairly recently retired from his position as a detective with the Michigan state police. He hopes to spend as much time as possible fishing and buys a small cabin in the woods of Michigan’s upper peninsula to do just that while he muses on the seven deadly sins and his plan to write a prospectus for the inclusion of violence as the eighth.

In addition to being retired, he is also somewhat recently divorced, much to his regret, from the love of his life, Diane. His regret, however, doesn’t stop him from pursuing each of those deadly sins in his own life while the author takes the opportunities offered by the plot to muse on some of his favorite themes, perhaps central being the American holocaust—the slaughter of native Americans and the great herds of buffalo as settlers moved west.

As Harrison has aged, he’s become very aware of his mortality and muses often here on the prospect of death. About Sunderson he writes, “As a retiree he was surprised how little he thought about death, the end of the story. That wasn’t a flip idea but a truth favored by Native Americans. Your story had a beginning, middle, and end like all stories.” This theme has been covered more extensively by Harrison in his brilliant novel, Returning to Earth.

Once a detective, it seems, always a detective at least in the case of Sunderson. He gets involved with a lot of dirty dealings and is placed in the arms of temptation—perhaps Harrison’s fantasizing—as Sunderson in his mid sixties has a protracted affair with a 19 year old as well as a fling with a neighbor in her forties. He finally says “no” when tempted by a too-young girl who he realizes might be a trap.

He drinks too much and is overly fond of the kinds of foods that aren’t necessarily good for him, at one point ordering two complete meals in a good restaurant. Despite Sunderson’s experiencing those deadly sins, he contemplates the infinite and the possibilities of religion. “As a child he had been confused by angels and when he asked his father he had said, ‘That’s a Catholic thing.’ His confusion increased until late in his teens when while sitting in the woods staring at a river in the spring two migrating warblers had landed on him. At that point he decided that birds had to be angels and felt blessed. He had sat still in the woods many times since during the migration period but it hadn’t happened again. Even the lowly crows and ravens were holy to him.”

The book could easily be read as a mystery and many would enjoy it as such. But the discerning reader will find several layers of enjoyment and intrigue beyond the basic plot. While this may not be Jim Harrison’s most important work, it is anything but ordinary.

Sunderson isn’t the only indelible character here. There’s Lemuel, a likely murderer who is self-educated and a knowledgeable bird watcher. Monica is Sunderson’s young lover, a talented cook who escapes her abusive family life. And Kate is the much too young temptress testing Sunderson.

Beyond the characters is the experience of fishing: “His line was too light for him to be insistent so he simply let the fish exhaust itself in the deep while keeping a light tension. He finally beached the fish on a sandbar with trembling hands figuring it was at least five pounds. Twice the size of any brown trout he ever caught. He reached in his vest for a little camera Diane had bought him but found its batteries were typically dead. He stared at the fish to memorize it, then slipped it gently back in the water.”

Harrison writes simply—he’s telling a story as if he were sitting on a porch in a rocking chair. Yet there’s a depth of feeling. A quiet passion. Many believe that Jim Harrison is one of our greatest living writers. No argument here.