Hold Still: A Memoir with Photographs 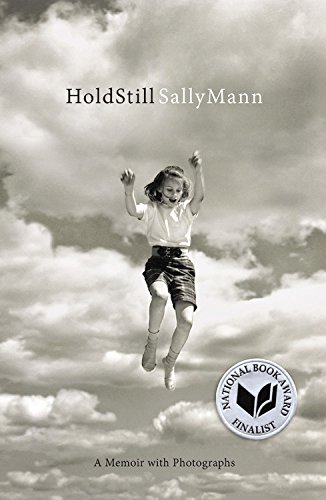 “I had returned at night to my room reeking of decomposition, the gag-making stench wafting up afresh from my film holders as I changed negatives in the motel bathroom. I had slipped on chunks of fatty adipocere and found hair stuck to the brake pedal of the Suburban as I drove home at night.”

That one small excerpt from Sally Mann’s startling memoir, Hold Still, says so much about the book, about Mann’s upbringing, and about her approach to life. She admits several times in the book to being afraid at certain times—in specific situations. But what we come away with is an image of an extraordinarily bold, daring artist and surprisingly involving writer. If you knew her fairly well before reading the book, those things might not be so surprising. For example, she has a master’s degree in creative writing. People around Lexington, Virginia, where she lives and works know who she is but have no idea of her level of fame and accomplishment outside her base.

For the slightly unkempt little woman lugging an unwieldy box camera and tripod around, this local girl, Sally Munger, has moved in high places but prefers her farm, her privacy, her freedom to tackle difficult and highly controversial subjects in her work. The first hundred pages or so of this work deals with the family pictures that establish her as a force in the world of fine photography with her initial books having the imprimatur of being published by Aperture. But those pages are also a love letter to Lexington and surrounding Rockbridge County.

There’s darkness, too, in her early and lasting marriage to Larry Mann and the subsequent tragic tale of his adoptive parents’ grisly death at home in very expensive New Canaan, Connecticut, along with other revelations. It’s that swing from an idyllic life, knowing and spending time with the Lexington resident and artist, Cy Twombly, to deep darkness that happens like the contrasts in a good black-and-white print.

The uproar created by the few nude images of her children in her book, Immediate Family, caught her off balance. They were shot on their secluded private property where the kids routinely swam in the nude. No one in the photography community was ruffled by the images, but there were those who didn’t understand the Mann family’s live and let live approach, one with its origins in Mann’s own childhood freedom without clothing.

As chapters progress, we get a good, long look first at Sally Munger’s mother who, for a number of years, ran the bookstore at Washington and Lee University and brought in celebrated authors like Truman Capote and Reynolds Price. The hints at a childhood of privilege—at least of an intellectual privilege—begin to build. At one point the parents take their daughter to Maine and visit Scott Nearing and his wife. Sally is sent off to Vermont to boarding school at Putney. After graduation, she enters Bennington College and, after her sophomore year, marries Larry Mann and, together, they spend her junior year in Europe.

She explores her family origins, both maternal and paternal, finding that her great grandfather was an inventor of a mechanized cotton gin that made him very rich. She finds ideal marriages and scandalous ones. And she comes to know her father, a classic, old-fashioned country doctor, on a new level after his death. His fascination with death and its iconography have a deep effect on his daughter, leading to her exhibition and book of a series of large format photographs taken at a Tennessee forensic facility known as the body farm. She spent days outdoors among the rotting bodies making photographs of the decaying flesh.

Her curiosity and need to understand this aspect of death required steely nerves. But her need to make images also required strong ethical considerations. “I did not take a picture the day that Larry picked up my father in his arms and carried him like a child to the bathroom, both their faces anguished. To do so would have been crossing a line.”

In an unusual feature for a memoir, but totally necessary for this one, is the inclusion, interrupting the text, of many photographs. They suffer from being printed on uncoated paper at fairly low resolution. But perhaps that, too, is appropriate for they are not being published here as fine art but rather to illustrate points being made in the text.

Altogether, this is a look inside the workings of a fine artist who uses ancient analog processes to produce totally modern work. And it’s a family history like no other.