News from Heaven: The Bakerton Stories 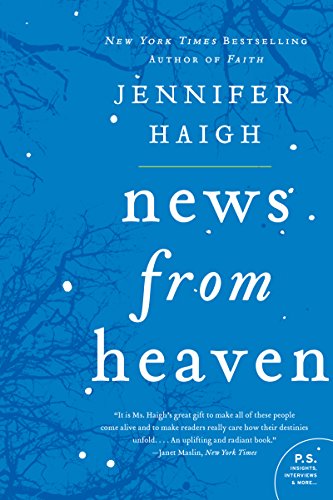 “This is the work of a skilled storyteller—a writer in control of her craft.”

Comprising ten short stories involving, in often subtle ways, the fictional western Pennsylvania coal mining town of Bakerton (which will be familiar to readers of the author’s previous book, Baker Towers), News from Heaven is a welcome throwback to mid 20th century fiction.

A reader beginning with the first story and continuing to read the other nine in the order presented in the book will find the same character appearing first as a teenage girl in the late 1930s and in the last story as a grandmother in more present times. That young girl, a Polish girl, has been sent to New York City to work as a helper in a Jewish household.

“She had come to New York three days after Christmas. A slow train had delivered her to Penn Station, a ten-hour journey from Bakerton, Pennsylvania. Until that day, she’d ridden only coal trains; the rickety local had standing space for passengers in the rear. Because the Nudelmans had paid her passage, Annie had a seat in a compartment. At the halfway point she ate an apple and a boiled egg, the lunch her mother had packed.”

Another girl from Bakerton lives on the floor above the Nudelmans.

“For two years Frances had worked at the Grossmans’, where her duties were the same as Annie’s: milchig and fleishig, the twin sinks and stoves. Mrs. Grossman was as crazy as Mrs. Nudelman. They shared the same mania for keeping things separate.”

The story is reminiscent of short stories read in high school English class 50 years ago. While that aspect of News from Heaven may seem damning, there’s a timeless quality to the way the story is written, a sensibility that would qualify it as an excellent example worthy of inclusion in a short story collection of the era.

Each of the stories in this volume is expansive without feeling compressed. The 27 pages of this first story could quite easily be made into a full-length motion picture, much like E. Annie Proulx’s “Brokeback Mountain” was.

However, in one story, that of a young man who escapes the confinement of the dead-end town, the connection to Bakerton is thin:

“He occupies a full page in Joyce’s address book, the entries crossed out every few months and replaced with new ones. That his journey ended in California—a place that had fascinated him since childhood—seems somehow correct, as though he’d planned it that way all along.”

The story seems to start at the end.

“In the parking lot she cuts the engine. A small plane buzzes in the flat blue sky. Watching it, she thinks: Is that you? As though the plane were her brother himself and not merely carrying what’s left of him.”

The sentences are short and seemingly simple. But they each carry a palpable sense of wistfulness or dread or encouragement—whatever emotion is appropriate to the story. This is the work of a skilled storyteller—a writer in control of her craft.