A God in Ruins: A Novel (Todd Family) 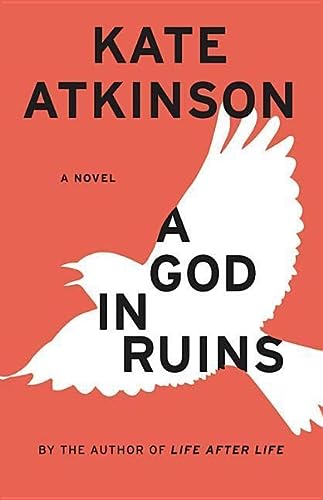 Kate Atkinson is a brilliant novelist, an historian, a tease, a practical joker; she’s empathetic, adventuresome, erudite. By now she's also probably quite wealthy . . . and with good reason. A God in Ruins is stunning proof.

Following her bestselling, award-winning Life After Life, Atkinson expands on the compelling characters introduced in that novel and focuses on little Teddy, (Edward Beresford Todd). The book ostensibly follows Teddy’s life for nearly 100 years, and then the author’s tour-de-force magic trick throws a spanner into the works. This reminds us after reading gruelingly real pages and pages of life—in a Halifax bomber on sorties over Germany in WW II—that we are reading fiction.

A God in Ruins can be read as an absorbing novel of English family life in the 20th century. Or it can be read as a highly effective anti-war story . . . or a violent, exciting, gripping adventure. And it is also a subtle investigation into the possibilities of fiction.

Perhaps in each of these the overriding emotion is grief. You finish a sentence chuckling and, four words into the next sentence, you’re slapped in the face with grief. That’s how well developed Atkinson’s characters are. If you have read Life After Life you know that. You care deeply about people who exist only on the page (and in your mind).

In addition to Teddy’s sister, Ursula (whose story was the basis for Life After Life) and the rest of the Todd household, the next-door neighbor, Nancy—who was Teddy’s childhood companion—appears here in a more central role and, in time, other characters make their debuts: Ted’s awful daughter, his grandchildren, and his bomber crew. All are flesh-and-blood real—but of course, they’re not.

Kate Atkinson’s intelligence and understanding of humanity informs every page. The emotional war stories and descriptions—the details—belie the fact that Atkinson wasn’t yet born nor has she ever flown a WW II bomber. Her research was so thorough that she lists credits and a bibliography after her vital author’s notes. The reader will at times need to rest the book for a few moments to recover before plunging ahead. It might help, too, to have a box of tissues handy.

Kate Atkinson MBE was born in York, England, in 1951. She is the author of ten novels, a collection of short stories, and a play. Her first novel was awarded the Whitbread Book of the Year and, among other awards, the same award, now called the Costa Novel Award, was given to Life After Life. Her four novels featuring the character Jason Brodie were made into a BBC television series called Case Histories. She lives in Edinburgh, Scotland.