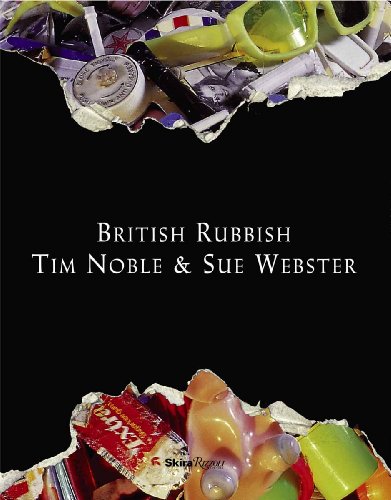 For those unfamiliar with the work of Mr. Noble and Ms. Webster, a quick look at the images presented in color within the pages of this large format volume might cause the reader to come away with the opinion that the work is far from noble and that Webster’s definition of fine art would exclude this work.

And that is part of the excitement of Tim Noble and Ms. Webster’s work: for a deeper look begins to reward the viewer.

The more time spent absorbing the intricacies and illusions, the more rewarding the experience becomes. There are, undoubtedly, those who will be put off by the scatological and sexual nature of many of the drawings and sculpture, as well as the titles of many of the works (i.e. “Pair of Arseholes,” “fuckingbeautiful,” and “A Couple of Dirty Fucking Rats”), but the result overwhelms the disgust and ends in wonder.

Much of the work may be divided into two groups: neon or light sculpture, and a shadow series. Both groups, from a technical standpoint, involve complex engineering as well as artistry.

The first group (mixed chronologically) is the more obvious, as the resulting images fit somewhat into an existing framework, bringing to mind “Learning from Las Vegas” by Robert Venturi and Denise Scott Brown and works by Kenneth Noland among others.

The shadow series of sculptures will be, initially, the off-putting group, made as they are of casts of Tim Noble’s penis, doll parts, stuffed animals, urine, blood, and household rubbish.

One in particular, made of nothing but many black penis and finger castings, “Black Narcissus 2006,” stands on a simple, polished dark wood plinth in the Freud Museum, London.

Another, in the British Museum, is a jumble of taxidermy animals. These two, along with others in this group, require a high intensity light projector and a plain wall opposite the light source, behind the construction. The resulting cast shadow in each case is that of a carefully controlled silhouette image, often portraits of the artists.

Or in the case of the previously mentioned “A Couple of Dirty Fucking Rats,” you get precisely what the title promises.

There are a few works that exist outside of the two separate bodies described. “The Joy of Sex” is a gentle send-up of the illustrations in Alex Comfort’s book of that title, consisting of at least one watercolor and 40 pencil-on-paper drawings (2005).

“The New Barbarians” (1997–1999) and “Masters of the Universe” (2000) are meticulously life-like and life-sized sculptures of the artists as prehistoric, unclothed figures in translucent resin, fiberglass, and human hair.

There is a nod as well to Salvador Dali in several turned goblets or chalices, “Spinning Heads in Reverse,” “Double Negative,” and, though quite different, “Untitled (Spinning Heads)” and “The Wedding Cake.” On the first two, the columnar turnings provide a negative double silhouette.

“Untitled (Spinning Heads)” does the opposite. It’s a solid turned form that, in silhouette, produces a double self portrait (presumably of Noble), while the last example is similar yet cut into raggedly and filled like a vessel with penis castings, one dangling out.

As is the case with virtually all art, seeing and experiencing the real thing is preferable to seeing reproductions thereof, whether as prints or in a book. The advantage of the book is that it offers a narrative, with occasional planning sketches of sculptures included.

From Mr. Deitch, “Noble and Webster are like a rock band, orchestrating their aesthetic mix into a high-energy, high-volume performance. They have adapted a musician’s approach to artistic composition and presentation.”

And “Like rock musicians, the persona of the artists is central to the content of the work.”

Mr. Bracewell quotes Jung on his shadow theories and adds, “Since the middle years of the 1990s, Tim Noble and Sue Webster have created a body of work that is as visceral and immediate in its visual and emotional impact, as it is meticulously crafted and thematically refined.”

This is a volume both enlightening and witty. The work may startle and shock, but ultimately it may teach us something worthwhile.