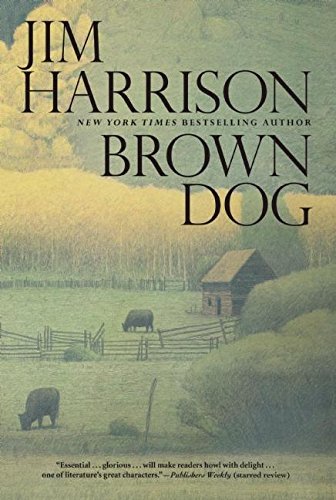 “If Jim Harrison or Brown Dog are new to you, Brown Dog: Novellas is a marvelous way to meet them both.”

Five of these stories previously appeared in other books of Mr. Harrison’s with He Dog, published here for the first time and the closing story in this collection, echoing in subtle ways some of his most recent work, musing on advancing age and preparing for death. It’s in no way maudlin, but a natural progression—with sudden, unexpected belly laughs. Is there another novelist in the last hundred years who has developed a character as vivid as Brown Dog?

Some of the stories are based in familiar Harrison territory—northern Michigan—with others straying to Montana and Los Angeles. Brown Dog—or “B. D.”—is an early drop-out, occasional drunk, pulp cutter, diver, scofflaw, hunter, fisherman, and lover with his own personal morality. He may or may not be Native American. He is if it is to his advantage. It doesn’t make much difference to him.

Much of the book is written in the first person as if by B. D., in loping, rambling passages that make complete sense. “I hung up the phone with a bad feeling in my stomach from Rose just like in the old days. The power of love to make you feel awful is something to see.”

Thirteen of Mr. Harrison’s books have been poetry. That shows up here in passages of lyricism. “Curiously he was far away transfixed by the odor of pussy willows along the creeks in the woods. They were the first true smell of spring and since childhood the sweet odor had swollen his chest.”

Mr. Harrison’s novellas equal most full-length books. His Legends of the Fall, as powerful as a Greek tragedy at just 84 pages, was made into a film with Brad Pitt and Anthony Hopkins. His skill at developing and fleshing out characters into breathing beings—people you know or once knew—is remarkable. And so it is with Brown Dog, the man.

In addition to all of the skirt-chasing, brawling, and pissing people off, Mr. Harrison endows his character, this funny guy scraping by, living in makeshift shacks in the cold winters, with a sensitive aspect in this sixth appearance.

“B. D. stood in Gretchen’s shower wondering at the femininity of the bathroom. He was standing in a warm hard rain with a big lump of melancholy in his chest. His was not a life of thought and he had felt his innards were strangling when he said ‘I want a family.’”

If Jim Harrison or Brown Dog are new to you, Brown Dog: Novellas is a marvelous way to meet them both.