The Opposite of Art: A Novel 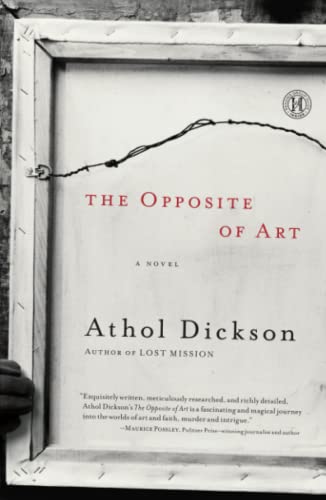 This is a novel filled with contrasts: stilted writing vs. elegant prose, existential thought vs. Christian beliefs, selfishness vs. generosity, accuracies vs. inaccuracies. Mr. Dickson’s numerous book awards have all come from Christian organizations, and this book is written from a subtle Christian point of view.

The story involves a painter, Sheridan Ridler, who, as a successful young man, is brash, confident, and selfish. His gallery owner/agent, Talbot Graves, has benefited financially from Ridler’s work, both above and below the counter. To further feather his nest by limiting the number of original paintings by his artist and to avoid being found out about his shady dealings, Graves decides to kill Ridler. Already we see some rather obvious names as symbols. There’s also a love interest, Suzanna.

Ridler returns, in effect, from the grave, having seen something so compelling that he spends the next large portion of his life trying to paint what he saw and traveling the world to experience various religions and beliefs in the hope that he may once again capture that ineffable “Glory.” Meanwhile, back at the ranch, everyone thinks he’s dead.

His search brings to mind the novels of Hermann Hesse, particularly Siddhartha. But here, in his experience of the world’s great religions, Ridler finds hypocrisy and violence in Thailand, in Israel, in Turkey, in Rome and elsewhere. The people, events, and locales all ring true. He exposes the zealotry that befalls all true believers; all believing that theirs is the only way. Few fundamentalist Christians will finish the book with that understanding.

Compare “Elsewhere on the earth might strife and disharmony exist, but never there” with “Startled, she pulled back. She tried to look away, but the image enchanted her, calling like the Sirens to Ulysses. With one last effort she physically withdrew an inch or two, but surrender was inevitable. In the end she just absorbed the painting, or was absorbed by it, the difference did not matter.”

Awkward vs. lyrical. Listing several famous painters, Van Gogh, Chagall, and Pirandello, Mr. Dickson includes “Mirko.” Google identifies Mirko as a chain of restaurants in Georgia and a kick boxer. Mirko? Luigi Pirandello was a writer, not a painter. A character, a rabbi in Israel, is named “Jonathon Klein” a number of times. Just once his name is spelled “Jonathan” as the name is spelled in both the Old and New Testaments.

In passages about Ridler’s painting, there are a few troubling issues. Artist’s oil paints are very expensive yet no matter where in the world he is, Ridler, penniless in Mexico and Texas, always has a ready supply of paint. Sable brushes are also staggeringly expensive. The fine soft hairs of the sable are gathered in the ferrule in such a way that one hair extends beyond the others to form a fine point. Pig bristles are also used in brushes for oil painting. Yet Mr. Dickson refers to “sable bristles.”

In the descriptions, Ridler tends to use colors raw from the tube, whereas it is much more likely for a painter to mix colors on a palette before applying them to the canvas. These don’t slow the momentum of the story but, to those familiar with painting, they create a sense of unease that may extend to other premises.

There is also one overriding contrast here. The book is philosophical in nature yet it can be read as an adventure, as a love story, and as a mystery. Parts are very well written. And the story takes flight with the introduction of Gemma, becoming more absorbing—no matter your worldview.