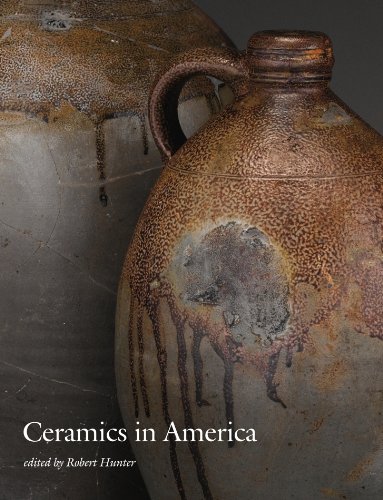 “Ceramics in America concludes with short papers on recent discoveries and reviews of recent pertinent publications. It is an altogether superb and rewarding volume, elegantly produced and comprehensive in its accessible scholarship.”

Starting with the first volume in 2001, each installment of this sumptuous annual features a cover with a telling detailed image of a segment of a pot. With the 11th volume, that has changed dramatically.

The cover of Ceramics in America features a full-color portrait of the Chinese dissident, Ai Weiwei, holding in his hands a small pile of sunflower seeds. As Garth Clark’s stunning depiction of Ai Weiwei, the artist (Mind Mud: Ai Weiwei’s Conceptual Ceramics) reveals, these are not sunflower seeds but ceramic replicas, made in the millions by Jingdezhen potters and craftspeople over a number of years for an installation by Weiwei at Turbine Hall, Tate Modern, London, 2011.

Clark’s paper follows “The Chinese Scholar Pattern: Style, Merchant Identity, and the English Imagination” by Sarah Fayen Scarlett, exploring how a 16th century Chinese ceramic pattern evolved into a 17th century English tin-glazed earthenware pattern. As Rob Hunter states in his introduction, “Learning how to decipher the beliefs, customs, and traditions of a society that are embodied in fired clay both ancient and modern is an ongoing challenge for the student of ceramic history.”

These two papers set the stage for the next, “Digging Up Salem’s Golden Age: Ceramic Use Among the Merchant Class” by George Schwartz. This archaeological assemblage from a trash pit on the grounds of the home of Captain Stephen Phillips (1764–1838), who “spent his entire career aboard ships on the pioneering voyages to the Far East that helped Salem transition from a fishing port to an entrepôt,” reveal Chinese porcelains from the second half of the 18th century and the expected assortment of British wares of the early 19th century.

From that glimpse of British creamware and pearlware, the next paper continues the transition into a revelation about blue transfer-printed wares celebrating early America: “The States Border Series” by Ralph and James Clews, in which Dick Henrywood explains that the structures enclosed within a cartouche in the midst of the state names are not American buildings at all.

The transition continues to “The Stoneware Years of the Thompson Potters of Morgantown, West Virginia, 1854–1890,” by Richard Duez and Don Horvath with Brenda Hornsby Heindl. With this and other papers, it must be said that, in addition to the exceptional color images by Gavin Ashworth, the sourcing of supporting historical images throughout is outstanding. This paper continues an exploration of stoneware manufacturing in Morgantown that was reported in the 2004 volume of this journal.

From Anne Arundel County, we move with Ivor Noël Hume to lower Manhattan Island via Guyana in “Cap-Hole Oyster Jars: A Racial Message in the Mud, or, Shipping Ostreidae Crassostrea virginica.” This is a fascinating detective story involving the work of an African American 18th century New York potter.

Ceramics in America concludes with short papers on recent discoveries and reviews of recent pertinent publications. It is an altogether superb and rewarding volume, elegantly produced and comprehensive in its accessible scholarship. There is, however, a quibble: None of the contributors are identified other than by name. It would add interest for the reader to know more about each.