Drinking with Men: A Memoir 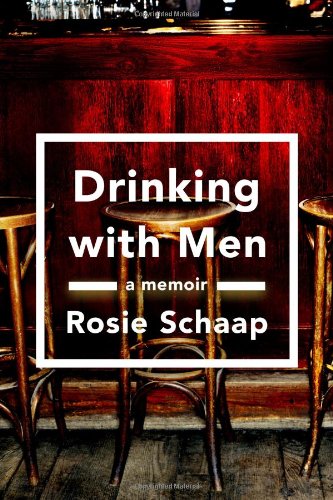 “. . . the thrust of Rosie Schaap’s memoir has to do with the title of the book: drinking with men. While those experiences seem to have resonated with her, they don’t come across as enthralling or memorable . . .”

The best memoirs describe both the unique experiences of the writer as well as the extraordinary people encountered during the journey, bringing all to life bit by bit, retold moment by retold moment.

Rosie Schaap, whose father was the much respected sports writer Dick Schaap and whose brother is frequently featured on ESPN television, leaves these two figures almost completely out of this memoir. But she does not replace them with equally compelling characters.

Unfortunately, the most consistently interesting person in Rosie Schaap’s life seems to be Rosie Schaap. Okay. I get it. It’s a memoir. Yet while there are some interesting characters on both sides of the bars she frequents, none are developed in her memoir to the point that they can be remembered at the end of the book. Nor does she bother to make the man she eventually marries anything more than two-dimensional in Drinking with Men.

A high-school dropout who travels to California to follow the Grateful Dead and to participate in the developing drug scene around the band, Ms. Schaap goes on to receive her equivalent diploma and enters Bennington College, which seems odd given her educational background. She lives off campus in an apartment near a bar in North Bennington, all of which must have cost a considerable amount of money. Yet an explanation for that never becomes part of her story.

While at Bennington she finds a bar across the New York state line that is written about in an enticing way with fascinating characters. She goes on to live in Manhattan and in Brooklyn while working a variety of short term jobs, none of which seem worth making into careers.

The only truly riveting section of this book concerns her first-hand experience of living in the city during and immediately after the events of September 11, 2001. At this point in the story, the author volunteered as a chaplain:

“On my first boat run, one victim’s mother, who had traveled to New York from the Deep South, wept during the ride, and not long after we arrived at the site, she fainted. Confronted by her grief, by the force of its intensity, I felt useless. It was unlike any grieving I had witnessed before: It was vast, biblical. She keened. “My baby, my
baby . . .”

But the thrust of Rosie Schaap’s memoir has to do with the title of the book: drinking with men. While those experiences seem to have resonated with her, they don’t come across as enthralling or memorable in this book.

She does, however, provide some advice: “Be good to the people serving you drinks; be open to your fellow patrons, no matter how different they are from you. Gently mind the people you bring with you, but have authority. Have fun, but not at the expense of anyone else’s fun. A bar is never yours alone.”