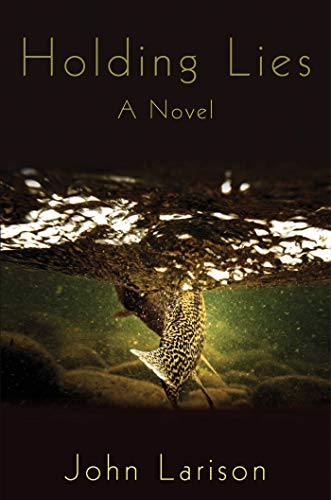 “Altogether, this is an admirable work of fiction, a compelling story told beautifully.”

Holding Lies is an exceptional work of literature disguised as a book about fly fishing steelhead salmon in the Pacific Northwest. It works on several levels—first as an enthusiast book of considerable merit with loads of lore, an acute sense of place, and passion; next as prose worthy of comparison to that of Jim Harrison, Howard Frank Mosher, and Michael Ondaatje; and, finally, as a tense, compelling study of characters, failed opportunities, regret, and tender relationships. It’s also a murder mystery.

Hank Hazelton is a river guide on the fictional Ipsyniho, a legendary salmon spawning river with dwindling native wild salmon that a group of dedicated guides go to considerable lengths to protect. Hank has a daughter, estranged, who wants to visit him now that she has grown into a Ph.D. ethicist living in Chicago whom he hasn’t seen since she was 16. Another, younger, river guide who has rubbed a lot of people the wrong way, goes missing in the river—his boat found with blood on the seat.

There are parallel themes of love, of aging, and of the hurt that people often unintentionally cause one another. As the story lines are developed, the pacing and drama increases, making the reader unable to put down the book.

“This was the kind of fishing he loved, the run to yourself, an eager fish out there somewhere, and yet he found himself fishing poorly. His casts landed in piles, his flies kept ducking underwater. He wasn’t immersed in the water’s reality like he should have been.” Or, as Hank’s daughter explains her job: “Preempt disputes, prepare for disputes, advise disputers, construct policies that will avoid future disputes. Really, pay me now and I’ll save you millions in attorney fees later. That’s what it boils down to. That and everyone wants to lunch with a philosopher; nobody wants to lunch with a lawyer.”

John Larison’s power of simple, direct descriptions shows up here: “Rita was the valley’s midwife, had been for as long as Hank had been a guide. She wore a pair of faded Carhartts, flip-flops, her gray hair in two easy braids.”

And his lyricism is found here: “Fall arrived late this year, toward the end of October, the first freshets clouding the river and filling it with drifting leaves. Shimmers of yellow and red and orange fluttered through the tea-stained pools, spun endlessly in the eddies, and carpeted the cobbled shores. Cool coastal gusts rushed upriver, ripping still more leaves from the trees and carrying them upstream in an inverted reflection of the river below.”

Altogether, this is an admirable work of fiction, a compelling story told beautifully.