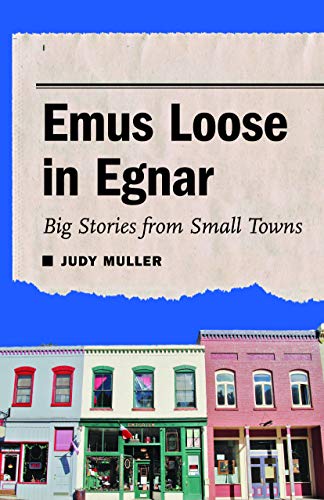 A read through this rather gentle, inquisitive look at small-town weekly newspapers could be beneﬁcial to your health. It may even lower your big city blood pressure.

In most respects, Emus Loose in Egnar is an antidote to the frantic page-turners that have the potential to make their authors household names. The languid pace comes in large part because the papers most closely reported on are in the west—in widely-spaced rural locations in the Texas panhandle, in eastern Montana, in Alaska, in the four corners region of Utah—where the pace of language seems to slow down.

There are stories, too, of danger in the coal country of Kentucky, of political county dynasties, and of business barons who take a little more than umbrage at “snitches.”

Some of the reports seem drawn out to fill space: for instance, the account of three competing papers of Hardin, Montana, where the town floated $27 million in bonds to build a huge detention center to provide jobs and revenue without lining up a source for prisoners, all complicated by the fact that the town borders a major Indian reservation which publishes one of the three local papers. It’s a complicated and delicious story, but it just drags on way too long.

The author makes points about the vast differences between city news and local stories where a reporter is often writing about friends, relatives, and neighbors. “Knowing when to name people . . . is just as touchy a subject as knowing when not to name them. Small-town editors tiptoe through this minefield every week.”

The title of the book is one of the most endearing aspects of the entire enterprise. Set in bold sans serif type, it’s amusing because we rarely see the word emu, let alone see it pluralized. So it’s disappointing to finally reach page 168 to find the ﬁrst mention of an event that happened so long ago that, apparently, there’s no longer a copy of the story to quote.

More interesting is the story of the town’s name which will not be revealed here. Another omission is the lack of any reference to Henry Beetle Hough, editor of the Vineyard Gazette—perhaps the most famous small-town newspaper editor ever—until the penultimate chapter. Granted, his book, Country Editor, and the many writings by others in appreciation of him, may have caused the author to figure nothing more need be said, but should his story be relegated to the back of the book?

Chapter 9 makes a number of worthwhile points beyond those relating to the Vineyard Gazette, the most gripping being the battles put forth against the Ku Klux Klan; the most dramatic that by Jack Tannehill of Mississippi’s Neshoba Democrat and that paper’s 40-year-running push to bring to justice the killer(s) of Michael Schwerner, James Chaney, and Andrew Goodman. The story’s drama comes in part because of the paper’s long, slow change in its position.

If much of the rest of the book provided dynamics like those presented in that chapter, it would be a more successful and rewarding read. Too often, scattered throughout the book, are references to just a few papers and their editors, often from towns with wildly improbable names like Concrete, Washington, and Canadian, Texas. You’ll be left wondering just how many times the Happy Belly Deli is mentioned.

The author is also listed as the editor—which may not be terribly different than a defendant representing himself in a court of law. Consider the following two sentences:

“He also insisted on hiring an editor who lived in town. Ellen Metrick, a former school teacher who moved to Norwood with her husband, an agent with the National Resources Conservation Service, jumped at the chance to be editor even though it pays little and is something of an ‘adjunct’ position.”

The reader doesn’t need to know anything about the subject’s husband’s job, the fact that they’d moved there, or that her job is an “adjunct” position. An editor would have done some chopping. Otherwise, this is a fine, well-paced, easy read.