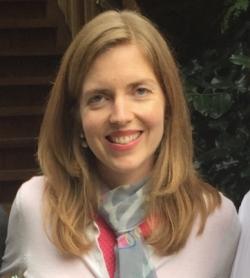 Jane Constantineau was born in Tehran on the eve of the 1978 revolution and lived in Guatemala City in the late 80s and early 90s, when her father worked as the senior environmental advisor for USAID. After he died in 2012, she completed his memoir, Kill the Gringo: The Life of Jack Hood Vaughn—American Diplomat, Director of the Peace Corps, U.S. Ambassador to Colombia and Panama, and Conservationist, which was published by Rare Bird Books in 2017.

Ms. Constantineau graduated from Williams College and received a masters degree from the Medill School of Journalism at Northwestern University. Over 10 years she worked as a writer for a public relations agency, an international advocacy organization, and a nonprofit consulting firm. In 2017 she launched a memoir writing business from her home base in San Diego.

Kill the Gringo: The Life of Jack Vaughn―American diplomat, Director of the Peace Corps, US ambassador to Colombia and Panama, and conservationist

I Cried to Dream Again: Trafficking, Murder, and Deliverance—A Memoir

“It took the failure of many of our country’s institutions—schools, hospitals, law enforcement, social services, and the criminal justice system—to turn Sara Kruzan into a convicted killer.

Vanderbilt: The Rise and Fall of an American Dynasty

The co-authors of Vanderbilt: The Rise and Fall of an American Dynasty, journalist Anderson Cooper and novelist and historian Katherine Howe, posit that the Vanderbilt family suffered from

“Hill’s account of low vision is a thought-provoking and emotionally powerful contribution to understanding vision loss.

When Harry Met Minnie: A True Story of Love and Friendship

People Who Love to Eat Are Always the Best People: And Other Wisdom

“For the many who already love Julia Child, the book will make a gratifying addition to their library.”

Group: How One Therapist and a Circle of Strangers Saved My Life

“Written with humor and brutal honesty, Group is a bracing, confrontational, and absorbing read.”

Flying Free: My Victory over Fear to Become the First Latina Pilot on the US Aerobatic Team

“Cecilia Aragon is no less than a thrilling inspiration to anyone who wants to accomplish something that frightens them or who has been discouraged from trying.”

Of Bears and Ballots: An Alaskan Adventure in Small-Town Politics

Heather Lende offers a down-to-earth account of life in local politics in her fourth book set in Haines, her small Alaska town.

Everything Is Under Control: A Memoir with Recipes

“Grant’s stark, spare memoir feels like the literary equivalent a few bold slashes of color across a canvas.”

The Ungrateful Refugee: What Immigrants Never Tell You

“The Ungrateful Immigrant soars when Nayeri tells her own story. . . . It’s a moving exploration of the lasting impact of losing one’s country.”

The Back Channel: A Memoir of American Diplomacy and the Case for Its Renewal

“It’s clear from Burns that the execution of foreign policy requires a deep understanding of geopolitical history, a grasp of complex policies, a long strategic view, and almost endless pat

Hurry Down Sunshine: A Father's Story of Love and Madness

“Hurry Down Sunshine . . . stands the test of time. Michael Greenberg’s intense and probing mind offers a singular perspective on a universal experience.

Every Day Is Extra

The summer before he started college, former senator and Secretary of State John Kerry sailed on a yacht with then-President Kennedy and his family.

Call Me American: A Memoir

“Told simply and well, Iftin’s story explains the incredible bravery and hope necessary to live in the crosshairs of war and to find a way out.”

The Comeback: Greg LeMond, the True King of American Cycling, and a Legendary Tour de France

Greg LeMond was a kid from outside Reno, NV, who joined an elite cycling team in France and went on to unseat Europe’s reigning champions in the sport.

Reliving the 2016 presidential election sounds about as appealing as dental surgery, yet this is what Amy Chozick, the New York Times reporter who covered Hillary Clinton’s campaign, asks

Rudy's Rules for Travel: Life Lessons from Around the Globe

“[Laura James’] story reminds us to have compassion for those who defy our definition of normal, whether or not they have a label.”

In Full Flight: A Story of Africa and Atonement

“In Full Flight succeeds as a fascinating character study, a deep ethical quandary, and an engrossing story.”

The Milk Lady of Bangalore: An Unexpected Adventure

Born and raised in India, Shoba Narayan left for college in the U.S. and stayed for the next 20 years.