Flying Free: My Victory over Fear to Become the First Latina Pilot on the US Aerobatic Team 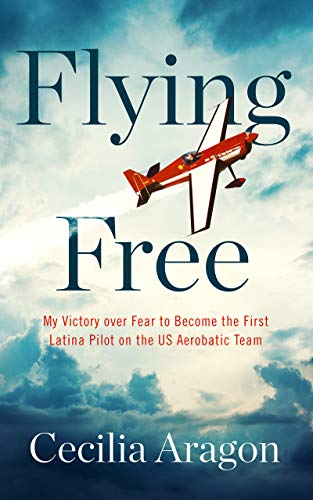 “Cecilia Aragon is no less than a thrilling inspiration to anyone who wants to accomplish something that frightens them or who has been discouraged from trying.”

Like so many others bitten by the flying bug, Cecilia Aragon became obsessed with learning to pilot a plane after her first flight in a single-engine aircraft. She spent every spare hour at the airport, and all she wanted to talk about was flying, even with her disinterested spouse and friends.

This is where any similarity between Aragon and other private pilots ends. In Aragon’s remarkable memoir, Flying Free: My Victory Over Fear to Become the First Latina Pilot on the US Aerobatic Team, the author describes her journey from a shy, awkward, and fearful girl to an almost preternaturally talented aerobatic pilot.

The daughter of a Chilean physicist father and Filipina mother, Aragon shone academically but suffered outside the classroom as a result of her “foreign” appearance. Tormented and physically attacked by bullies at her school in small-town Indiana, where her father taught at Purdue University, she was too afraid to share the extent of the abuse with her parents.

She learned at home that girls should be helpful, putting others’ needs before their own. Going after what she wanted was selfish. Out in the world, she saw that being smart made her peers mad, that she was different from those around her, and she couldn’t count on grownups to be supportive.

When her coworker at a software company in Silicon Valley offered Aragon a ride in his small plane, she uncharacteristically accepted. Although it frightened her terribly, the appeal of flying was powerful and immediate. “The hole in my heart was filled,” she writes of that first flight.

This was the 1980s, and flying airplanes was largely the province of wealthy, white men. Aragon, in her early twenties and making an entry-level salary in programming, immediately found an instructor and arranged her life around flying. She spent all of her disposable income on lessons, working in flying time before and after work and on weekends.

After quickly acquiring her private license, instrument rating, and commercial rating, she tried a lesson in aerobatics, thinking it would give her a better physical connection to the airplane. Although she needed to return to the ground quickly to avoid throwing up, Aragon knew that she had found an even more pure form of joy in aerobatic flying.

Aragon writes with endearing honesty, humility, and vivid detail in recalling her intense fear and sense of inferiority as she learned to fly. “I was terrified of operating machinery. Even driving a car scared me.”

Aragon’s ace up her sleeve was her mathematical skill. Not only was her sharp mind highly trained in math, but doing the calculations soothed her fears, giving her the confidence to tackle each challenge. And challenges abounded in Aragon’s path to aerobatic triumph, from the economic burden of owning an aircraft to the challenges of flying a plane built for a man’s body.

Despite her obvious talent as she progressed in aerobatics, Aragon never fully shed her fear. In a process she calls induction, she worked through the trickiest, riskiest maneuvers step by step, calculation by calculation, until she was confident she could do them. In the air, she channeled her fear into excitement, which came across in her performances.

Aragon effectively brings readers into the cramped cockpit with her as she clamped her double seat belts down painfully across her legs, as she yanked the stick with all her might to make a sharp turn, and when she hovered, completely vertical, waiting for her plane to flop over and begin its nose dive.

Through flying, Aragon finally felt the freedom and power she missed growing up as a minority in a mostly white community, and as a daughter of immigrants with traditional mindsets about gender roles. Slowly, she also found an accepting community among her fellow pilots—primarily older white men.

This diminutive, timid pilot who needed to attach scuba weights to her seat and wear elevator shoes to even qualify to fly her first aerobatic plane, shines in Flying Free as a formidable force. Cecilia Aragon is no less than a thrilling inspiration to anyone who wants to accomplish something that frightens them or who has been discouraged from trying.

Aragon credits flying with opening her world and giving her the confidence to realize her potential. Flying allowed her to change her lifelong mentality of “it’s not safe. I don’t belong. I’m not that kind of person.” A quick look at her biography suggests that she ran with it. Aerobatic flying is practically a footnote in her larger career as an eminent computer scientist.

Knowing the impressive trajectory of Aragon’s life after she conquered aerobatic flying, it’s powerful to think what might not have been had Aragon not climbed into that four-seat Piper as a young woman. Conversely, it suggests what great fortune it is to discover one’s passion. Like jet fuel to an airplane, Aragon shows how passion is the ingredient that powers people to action, allowing them to reach great heights.