The Ungrateful Refugee: What Immigrants Never Tell You 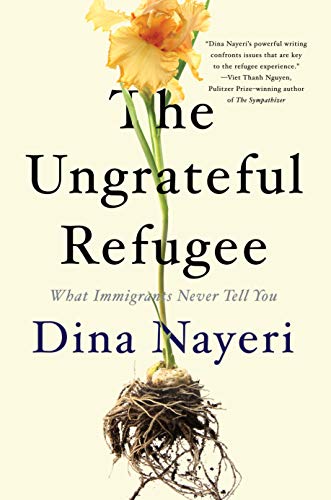 “The Ungrateful Immigrant soars when Nayeri tells her own story. . . . It’s a moving exploration of the lasting impact of losing one’s country.”

When Dina Nayeri settled in Oklahoma at the age of ten and tasted her first Slurpee, she didn’t like it. Too sweet, too blue. She had grown up eating rose water pastries and sour cherries in Isfahan, Iran. But she drank the Slurpee politely and gratefully in the presence of her American sponsor, not wanting to offend.

It would be the first of many times that Nayeri had to pretend that America offered her something better than what she had left behind.

In The Ungrateful Refugee, Nayeri describes her family’s flight from Iran in 1987, eight years after the Islamic revolution brought Ayatollah Khomeini to power. Though she grew up in war time, she led a relatively privileged life, the daughter of a dentist and a doctor. But there were problems at home—a father addicted to “an unknowable demon something” and a mother searching for greater meaning. She found it in Christianity.

Nayeri’s mother took greater and greater risks by proselytizing in Isfahan’s strictly Islamic society. Finally, after several brushes with police, Nayeri’s father secured plane tickets out of Iran for his wife and two children. For Nayeri’s mom, it seemed like a way out of an unhappy marriage as much as an escape from Islamic rule.

After extended stays in refugee housing in Dubai and Italy, Nayeri finally made her way to Oklahoma thanks to a sponsor arranged through a Christian church. Nayeri’s story does not fit the stereotypical image of the persecuted refugee. She lived comfortably in Iran, and her family likely would have been left alone by police if her mother had been more discreet about her religion.

Yet once they fled, they endured the same hardships of any other refugee: crowded and undersupplied camps, endless waiting, inadequate schooling, and life at the mercy of asylum officers. The waiting, particularly, got to Nayeri. “Why does patience seem like one of those manipulative, sinister virtues invented to debase or subdue, like chastity or poverty?”

As she writes about each stage of her immigration experience, from escape to assimilation, Nayeri includes short stories of other refugees. These interludes provide some interest but lack the power of Nayeri’s own story, which she tells with raw honesty, grace, and humanity.

Part memoir, part commentary on what Nayeri sees as the broken, callous asylum process, the book includes her experience visiting a refugee camp in Greece. She particularly takes aim at asylum interviews, in which she says the narrow criteria for a refugee’s believability vary by country.

“To satisfy an asylum officer takes the same narrative sophistication it takes to please book critics,” she writes. Nayeri interviews many refugees and those who help refugees, but she does not speak to any current or former asylum officers. Given the way the author embraces the contradictions and complexities of her own experience, her generalizations about the asylum process fall flat.

As a teenager in Oklahoma, Nayeri sacrificed her social life and free time to earn admission to Harvard (she ended up at Princeton), abused her body to excel at Tae Kwon Do, and lived with what she describes as the maddening “itch” of obsessive compulsive disorder. Her assimilation was violent, as though she had to destroy herself to form anew.

In contrast, her empathy for fellow refugees is so acute that she frets over every word and gesture. She dresses purposely shabbily to bag groceries at a refugee grocery store, then beats herself up for speaking Farsi to Iranian shoppers. She criticizes her affluent New York friends for declining to eat with the people at a homeless shelter where they had volunteered.

Understanding the nuance of the refugee experience is surely a valuable pursuit, and Nayeri describes it eloquently. “Accepting charity is an ugly business for the spirit. It rubs you raw, especially if you were once someone with pride and lofty goals, someone who shook hands and locked eyes.” But her granular critique of how we treat the displaced and the poor could scare anyone away from helping.

The Ungrateful Immigrant soars when Nayeri tells her own story. She deftly confronts the contradictions in her family, from her highly educated mother’s blind faith to her grandmother’s failure to sponsor her own family as refugees in England. But Nayeri scrutinizes herself the most, admitting to confusion about her own identity well into adulthood. It’s a moving exploration of the lasting impact of losing one’s country.