People Who Love to Eat Are Always the Best People: And Other Wisdom 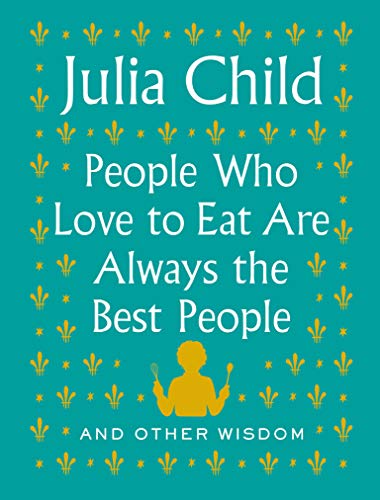 “For the many who already love Julia Child, the book will make a gratifying addition to their library.”

Fans of Julia Child will appreciate People Who Love to Eat Are Always the Best People, a gift-size book of pithy expressions and short passages from the beloved cooking teacher. The selected quotes reflect Child’s love of French cooking and her high standards in the kitchen, but also her pragmatism and spunk.

Child graduated from the esteemed Cordon Bleu cooking school in France before embarking on a wildly successful career as a cookbook author and television host. Child, who had no children, found her passion relatively late in life. “I was thirty-nine when I started cooking. Until then, I just ate.”

She became famous through her cooking show, which ran for ten years and won multiple awards. Her robust, lilting, high-pitched voice and her willingness to make mistakes and soldier on endeared her to a wide audience in the 1960s and ’70s. Child has 12 books and cookbooks to her name.

While she inspired a generation of women to spend more time in the kitchen, it’s hard not to understand Child as a feminist for her time. Much of her advice centers around taking risks, pushing oneself, and never, no matter how terribly things turn out, apologizing.

“I think every woman should have a blowtorch,” Child says. Perhaps said in reference to a creme brulée at the time, today those words speak volumes. It’s a reminder that Child herself was a trailblazing woman, carving a long and lucrative career out of male-dominated profession.

Most of the quotes are classic, smile-inducing Julia Child, although some—“You don’t have to cook fancy food or complicated masterpieces—just good food from fresh ingredients”—feel like filler. The book’s spare illustrations seem too dull to accompany Child’s larger-than-life persona. Photos would have been more fitting.

The selected quotations delightfully highlight Child’s combination of high and low brow sensibilities. “If you have not a good wine to use, it is far better to omit it, for a poor one can spoil a simple dish and utterly debase a noble one,” Child says.

Several pages later, she declares, “Without peanuts, it isn’t a cocktail party.”

This book should not serve as an introduction to Julia Child. One needs to imagine these words uttered in her distinctive voice as she towers over a bowl of eggs, whisk in hand. For the many who already love Julia Child, the book will make a gratifying addition to their library.