I Cried to Dream Again: Trafficking, Murder, and Deliverance—A Memoir 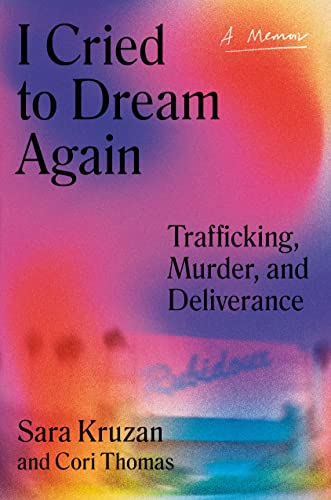 “It took the failure of many of our country’s institutions—schools, hospitals, law enforcement, social services, and the criminal justice system—to turn Sara Kruzan into a convicted killer. It will take coordinated, large-scale reforms to prevent similar tragedies from occurring again.”

It is difficult to imagine a personal story that better illustrates the failings of our society than Sara Kruzan’s. The daughter of an abusive single mom, Kruzan found no safe harbor growing up in a small town in Riverside County, California. Most people lived in poverty, and gangs made the streets unsafe and drugs ubiquitous.

“Everyone was out for themselves, tired, suspicious, and afraid that you might have your eye on what little they had, because you had just as little.” The lack in Kruzan’s life—of love, security, belonging, and material things—made her an easy target for a local pimp, who recruited her she when was only 11.

She skipped school and attempted suicide multiple times. At the age of 16, when she shot and killed her pimp, the court did not consider Kruzan’s history of abuse and her young age. A judge sentenced her to life without parole.

In I Cried to Dream Again: Trafficking, Murder, and Deliverance, Sara Kruzan, with Cori Thomas, writes her story as a free woman. Thanks to a grassroots campaign and the work of Human Rights Watch, the governor of California reduced her sentence to manslaughter. She was released from prison after serving 19 years—the majority of her life.

Kruzan describes a troubled childhood that made it easy for her pimp, GG, to ensnare her with offers of ice cream and new clothes. He soon began raping her to prepare her for prostitution. “As GG was offering his lessons on technique, I was learning to disconnect from myself.” Disconnecting was a skill she called upon later when she was raped by gang members and by a friend of her mother’s.

At 13, she began working the streets of Hollywood with the rest of GG’s prostitutes. She would have sex with men in their cars or in a rented motel room (which cost extra) from 6 p.m. to 6 a.m. All of the money went to GG.

Each time Kruzan had a brush with the police, the hospital, or social services, her mother lied and made excuses, and Kruzan was returned home to her abusers. Because GG had threatened Kruzan’s life if she ever told anyone about him, she kept quiet about her life as a prostitute.

Kruzan met a nice boy her own age and fantasized about running away with him. They moved in with his older friend, James Earl, and tried to scrape together enough money for their own apartment. When Earl, a drug dealer with a criminal record, got wind of how much money GG made, he hatched a plan to rob and kill him.

He ultimately asked Kruzan to do his dirty work for him, promising that he would share the money with her. Earl gave her a gun, and when GG took her to a motel that night, she shot him in the back of the head as he plugged in a sex toy.

Only 16, Kruzan was tried as an adult due to the “criminal sophistication,” planning, and premeditation involved. After a couple of years with juveniles, Kruzan moved to the largest female prison in the U.S. in Chowchilla, California.

With a youth devoid of nurture and care, Kruzan did much of her growing up within the walls of the prison. Finally free of physical, emotional, and sexual violence, Kruzan discovered a love of painting and became a high-spirited, positive presence in her prison community. “Prison taught me everything good that I know today about patience, perseverance, love, and friendship.”

But the criminal justice system continued to fail Kruzan, denying her appeals year after year. Then, about 10 years into her sentence, Kruzan responded to a flyer from Human Rights Watch seeking women who had been sentenced as juveniles to life without parole. That started a long process of legal, grassroots, and legislative activism that resulted in the reduction of Kruzan’s sentence and her release.

The narrator’s voice in Kruzan’s story is difficult to define. She uses sophisticated words and ideas to describe the horrors of her life as a pre-teen that she could not possibly have known then. She admits that many of her memories have been suppressed and that her mind went someplace else during much of her abuse.

Her inability to capture her childhood perspective suggests the irrevocable damage of childhood sexual abuse. It robbed Kruzan of her memories, her safety, her dreams, and her voice. “My life is a puzzle with many missing pieces, and to complicate matters, I’ve spent years trying to forget my past so as to put it all behind me.”

Kruzan’s story holds a stark warning for anyone who thinks that we should let families cope with their own problems, allow gangs to operate freely in poor neighborhoods, or trust our criminal justice system to mete out fair punishment.

It took the failure of many of our country’s institutions—schools, hospitals, law enforcement, social services, and the criminal justice system—to turn Sara Kruzan into a convicted killer. It will take coordinated, large-scale reforms to prevent similar tragedies from occurring again.