The Comeback: Greg LeMond, the True King of American Cycling, and a Legendary Tour de France 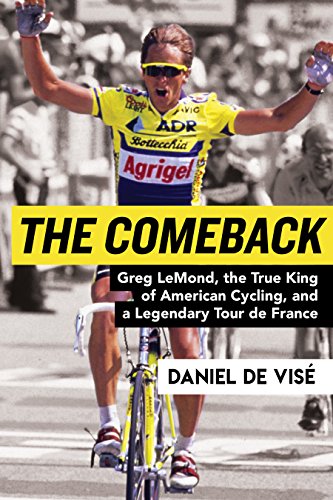 Greg LeMond was a kid from outside Reno, NV, who joined an elite cycling team in France and went on to unseat Europe’s reigning champions in the sport. While Greg made a big impression across the Atlantic, he received scant attention in the U.S., where cycling was off the public’s radar. That changed in 1986 when Greg became the first American to win the Tour de France, the most prestigious and arguably most grueling bicycle race in the world.

The Comeback looks at Greg’s evolution from a hyper kid who loved to ski to a preternaturally gifted athlete who took up cycling with his dad. After he had won all the amateur races in the U.S., professional teams in Europe came calling. At 19, he joined France’s Renault cycling team, a culture shock for the young man who didn’t speak the language and had no idea about the many norms and traditions of European cycling.

Even as Greg flouted French customs—eating ice cream and cheeseburgers during racing season and traveling with his wife—he continued to improve and become a contender in the major races in Europe. The dynamics of the cycling team were complex, with pecking orders, grudges, and allegiances coloring each event. Greg, conflict-averse and trusting, struggled with the politics of cycling.

Greg won his first Tour with virtually no help from his jealous and divided teammates.

Nine months later, with his career at the highest level and his name finally penetrating the U.S. media, disaster struck. On a turkey hunt, his brother-in-law accidentally fired his shotgun, sending dozens of pellets throughout Greg’s body. The accident punctured Greg’s lungs and could have killed him. Riddled with 60 holes, he looked like “a human colander,” his wife said.

During an arduous recovery, Greg was fired by his cycling team and lost his financial sponsors. After finding a no-name team to take him, he posted lackluster results in many races before finally hitting his stride. At the 1989 Tour de France, he won by an almost inconceivable eight seconds in the final time trial of the race, beating his former teammate Laurent Fignon. The next year, he won his third and last Tour de France.

Author Daniel de Visé provides detailed accounts of a dizzying number of races throughout LeMond’s career, a level of information only a cycling fan could truly appreciate. He devotes particular attention to Greg’s rival, Laurent Fignon, ostensibly because the two followed similar career trajectories and faced each other often in races. However, by Greg’s own admission, Fignon was seldom on his mind, and his inclusion in the story feels unnecessary.

De Visé addresses the issue of doping from the early days of Greg’s career through the end, when drugs were a much greater factor. In the 1980s, doping was confined to cortisone and steroids, enough to give someone a small edge but not enough to “turn a donkey into a thoroughbred,” according to Fignon. The introduction in the 1990s of EPO, a drug that increased the number of oxygen-carrying red blood cells, was a game changer.

The temptation to use performance-enhancing drugs becomes obvious from de Vise’s vivid description of the sport as one of physical torture. Crashes, saddle sores, torn tendons, and mountains so steep they are described as “beyond categorization” are just some of cycling’s injustices. To even consider competing beyond an amateur level, cyclists must possess a biological aberration: an ability to process at least 70 milliliters of oxygen per kilogram of body weight per minute.

Greg, who processed an astonishing 93 milliliters of oxygen, maintains that he never doped during his career. De Visé supports that account and makes the case that Greg’s career was cut short by the critical mass of cyclists doping with EPO. Greg became frustrated and baffled when, despite feeling in top condition, he could no longer keep up with the pack. He won his last race in 1992.

Enter Lance Armstrong, the more famous American cyclist and the topic of the last quarter of de Visé’s book. Many dubbed Armstrong “the next Greg LeMond” due to his repeat Tour de France wins and his comeback after cancer. But Armstrong, described here as brash, arrogant, self-serving, and duplicitous, had little in common with the good-humored, conflict-averse, team player LeMond.

After hearing of Armstrong’s association with a doctor known for doping, LeMond began challenging him publicly about his doping denials, an unusual move that isolated Greg from the cycling community and threatened his financial relationships with companies that had deals with both men. Armstrong’s eventual confession and the stripping of his titles vindicated Greg, elevating his profile again as the only American to win three Tour de France titles.

De Visé at times fawns too much over his subject, but he also lays bare the undeniable facts of Greg’s amazing talent. That he achieved all he did without the benefit of doping, without the support of an American cycling team, and with a catastrophic injury in mid-career, is remarkable. Greg’s life is a story worth understanding and his name is one worth knowing, especially in light of the string of discredited riders who followed him.