The Milk Lady of Bangalore: An Unexpected Adventure 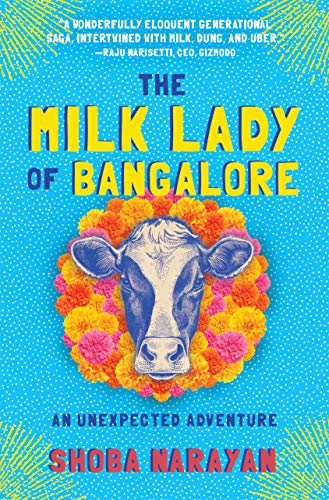 Born and raised in India, Shoba Narayan left for college in the U.S. and stayed for the next 20 years. Her decision to move back to India with her husband and their two daughters is the backdrop for this book about the tradition, history, and mythology surrounding cows in Indian culture. Narayan imparts well-researched, intriguing, and sometimes humorous facts about the complex role of cows in Indian culture but falls short of creating a narrative with emotional depth.

As Narayan tells it, her interest in cow’s milk and its origins was as nonexistent as any busy Manhattanite’s when she first arrived in Bangalore. Then she encountered a cow with the local “milk lady” in the elevator of her building on move-in day. Narayan followed them to a housewarming where a family and their priest welcomed the cow with mantras and food offerings.

Not wanting to pass up this chance to bless her own home, Narayan asked the milk lady to bring the cow to her apartment. After the women settled on a cost of 700 rupees, the cow meandered through the author’s home with considerably less ceremony. As she left, the milk lady, Sarala, told Narayan matter-of-factly, “At some point, you should buy [the cow] some bananas as a thank you.”

A shrewd businesswoman and excellent spokesperson for all things cow, Sarala worked hard to convince Narayan that the fresh cow’s milk she sold on the street was superior in both taste and nutrition to the pasteurized milk sold commercially. Like many aspects of life in India, the type of milk you drink falls along class lines. The wealthier people in Narayan’s building would not dream of filling a bucket with milk from Sarala’s street cows.

After a deep dive into the dangers of unpasteurized milk, Narayan became a customer of Sarala’s, although at her family’s urging she double-boiled the milk. While this arrangement brought Narayan the personal satisfaction of buying local and organic—not to mention powerful digestive enzymes—it also opened her up to the pitfalls of being one of Sarala’s richest customers. Eventually, Sarala asked Narayan to buy her a new cow.

Narayan agreed and took on the cow search with the same fervor she brought to researching cow’s milk. She visited local dairy farms and cattle fairs, consulted with cow experts, and generally treated this cow as though it would be her own. The cow negotiations were fascinating. Narayan, considered by the working classes to be a “modern Madam,” dressed the part of a typical Indian woman in order to get a better price. At one cattle fair, their agent haggled over the cost of a cow using a system of pressing hands with the seller under a towel.

The book is at its best when Narayan describes life’s small moments in India. “Every morning, whether in Kolkata or Delhi, Mumbai or Madras, India wakes up to the comforting plop of milk packets being delivered to their homes. We scissor open these packets and make our masala chai infused with cardamom, cinnamon, ginger, cloves and a pinch of salt.” Narayan does not neglect the many uses of cow dung and urine, which Indians believe possess good bacteria and spiritual power and may even make you smarter.

The setup for the book—an Indian woman returning to her mother country and trying to find her way—creates the expectation that the milk lady would act on some level as the author’s guide or advisor in her new life. Instead, Narayan’s relationship with Sarala never got beyond the transactional. Despite their long association, they failed to breech the gulf between their vastly different worlds in any meaningful way.Though Narayan writes that she and Sarala had a great bond of friendship, she also admits that “we have agendas, Sarala and I.” Sarala’s objectives varied depending on the latest challenge to her family’s wellbeing, from needing a new cow to getting her niece and nephew into a good school. Narayan’s agenda was “to figure out how to learn from [Sarala] without allowing her to take advantage of me too much.”

The bond they shared is not much in evidence. The two fell out of touch for years before accidentally bumping into each other at the end of the story, which spans about 12 years. While we never get more than a superficial understanding of either Sarala or Narayan, the book offers a deep look at cows and all their excretions. For those curious to know why many Indian families coat their floors with cow dung, and why others rush over to peeing cows with empty soda bottles, hoping to catch their urine, it’s worth the read.