All of This: A Memoir of Death and Desire 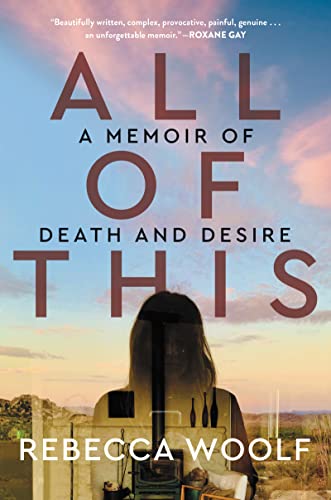 “Memoir is meant to be an individual story that illuminates the human condition. In that sense, All of This achieves its purpose, pushing the envelope of a genre whose authors regularly grapple with how much to share.”

Rebecca Woolf delivers a provocative new take on the widow memoir with All of This: A Memoir of Death and Desire. Woolf lost her husband to pancreatic cancer just 14 years into their relationship, with four young children at home. The twist? She’s glad he’s gone.

In an urgent, sensual, and wildly confrontational book, Woolf spills the whole, messy truth of her experience losing a man she deeply resented but also, at times, loved. The concept of honoring the dead goes out the window here, with prejudice.

“Is it more important to bury the truth of a dead man than to honor the truth of those who survived him? I had to write this book to answer that question, and I believe with every cell in my being that that answer is no.”

Woolf tells the story of her husband Hal’s death in three parts, beginning with his diagnosis and ending with her exploration of different partners, male and female, in the two years after his death. She sets firm boundaries around the ownership of this narrative: It is hers alone. The book’s dedication is to herself.

Woolf’s writing is raw and stylish, a blend of poetry, prose, and texting. Her roots as a mom blogger show in the immediacy of the writing and the messiness of the emotions. Woolf hasn’t taken 10 years to sort out her feelings and fold them into a neat package. She writes about her experience as it unfolded for her, giving readers a rich, tangled, and non-definitive take on a different kind of grief.

With the palpable anger of a woman who pretended everything was fine for too long, she weaves flashbacks into the story illustrating the ways her husband broke her. She tells of his rage, his self-absorption, and his forcing himself on her while she slept. He’s even an unattractive cancer patient, demanding and selfish.

But Woolf also loves him fiercely. The love is fleeting and physical; she clings to it tenuously as she works around the clock as his caregiver in the four months between his diagnosis and death. She grieves him in fits and starts, unable to let go of the clothes that smell of him even though she hadn’t let him touch her for years.

Woolf invokes a feminist framework to define her unhappiness in the marriage and her decision to write about it. She often couches her experience of hiding her true feelings and making excuses for her husband as universally and distinctly female.

“Culturally, women have made it a point to ignore the faults and foibles of men posthumously. We have pretended bad marriages were good. Made excuses for bad behavior at the expense of our own safety, gaslighting ourselves into oblivion.”

Woolf’s post-Hal life is a string of satisfying one-night stands with men and women, a staunch regimen of intimacy over attachment, and loyalty to herself first and foremost. A couple of long-term relationships come with strict boundaries and no expectations.

Whether this new lifestyle was a reaction to a stifling marriage or an expression of her true nature, it begs the question: Would Woolf have been satisfied in any monogamous, heterosexual relationship? Was Hal terrible, or just terrible for her?

Woolf’s portrait of herself and her grief are layered and complex; her depiction of Hal is not. He comes across as a jerk who was a talented musician and good in bed. Because he’s not around to defend himself, reading Woolf’s story often feels uncomfortable, if not unfair.

In the introduction, Woolf recounts a moment immediately after Hal’s diagnosis in which he tells her to write this book—“the truth about everything. It’s okay. You have to do it.” One wonders if Hal understood his wife’s full truth when he spoke those words.

Woolf’s unforgiving account provokes the desire to search the pages for any of Hal’s redeeming features, if only for the sake of his four kids and surviving family. As much as it is deeply satisfying for a woman to tell her truth and let the chips fall, a bit of humanity is lost when the object of her scorn is dead and buried.

“I am not the first and certainly not the last wife to bury a husband she didn’t want to be married to anymore,” she writes, explaining her decision to write the book. “Nor am I the only widow relieved to be out of a relationship that nearly paralyzed her. But I found it nearly impossible to find anyone willing to talk openly about the kind of grief I was feeling when Hal died.”

Memoir is meant to be an individual story that illuminates the human condition. In that sense, All of This achieves its purpose, pushing the envelope of a genre whose authors regularly grapple with how much to share. Especially for those in the same position as Woolf, who find themselves unexpectedly losing a partner they didn’t want to keep, this difficult story needed to be told.