Group: How One Therapist and a Circle of Strangers Saved My Life 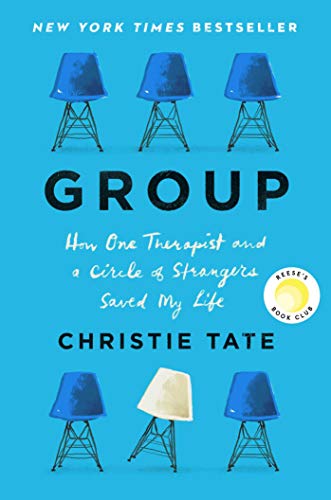 “Written with humor and brutal honesty, Group is a bracing, confrontational, and absorbing read.”

Christie Tate’s memoir Group opens with the author driving aimlessly, a bag of groceries by her side and a death wish on her mind. She wants to be dead in a matter-of-fact way, based on the depressing details of her life and the lack of better options.

Tate’s self pity sounds almost cliché for her demographic—overachieving, single, angsty professionals in their twenties. It’s the groceries that intrigue; Tate has a bag of two dozen red apples in the passenger seat.

Convinced by a friend to call a therapist and convinced by that therapist to join his group session, Tate begins a tortured journey to solve her problems. In Tate’s hands, mundane depression crackles alive with the gory details of her particular miseries, including the story behind those apples. Written with humor and brutal honesty, Group is a bracing, confrontational, and absorbing read.

From the beginning, Tate doubts her therapist, Dr. Rosen. Alarmed that she recognizes him from her eating disorder support group, Rosen reassures her that he has no secrets, and Tate soon learns that she would need to shed her own secrets to follow his path to recovery.

Rosen’s “process,” which often seems too loose and spontaneous to qualify for that label, was to feel everything and share everything. He tells Tate about group therapy, “You don’t need a cure. You need a witness.”

Her witnesses are an eclectic group of six, most of whom had been meeting on the same stained carpet with Rosen for years. They don’t hold back, telling all about their various personal dramas and expecting Tate to do the same.

The group operates by its own unorthodox rules. Most strikingly, they make no promise of confidentiality. They can socialize outside of group, and they know an unusual amount about their therapist’s personal life.

Tate initially balks at these norms, concerned about the ramifications of losing her privacy. But soon, out of a desperate wish to fix herself, she jumps in with both feet.

Tate’s vivid, engaging prose opens the door on group therapy, making it feel like one is right there in a molded plastic chair, watching as Dr. Rosen rocks Tate in his arms after one of her breakdowns. It makes for an addictively voyeuristic, often squirm-inducing read.

Regularly an emotional wreck during sessions, Tate shares everything from childhood trauma to bathroom habits and graphic sex stories. Rosen remains mostly passive. He asks Tate simple questions, lets the group weigh in with opinions, then leaves her to stew in her own misery, uncertainty, and frustration.

His prescriptions are few. Rosen has Tate tackle her unusual eating habits by calling a group member every night to report what she eats. For insomnia, Rosen prescribes a phone call from another groupmate telling her an affirmation each night before bed.

Tate’s biggest goal in therapy is finding a partner. Forward and funny, Tate isn’t shy around men and never hesitates to jump in bed. But she has the whiff of desperation on her, and relationships never stick.

She dates a handful of men after she joins the group, each one seriously flawed. As her relationships fail, Rosen lets Tate thrash and moan, often literally, as she wonders again and again how this therapy is helping her.

“There were disclosures,” Tate writes about the group process. “There was feedback. There was looking, seeing, and being seen. There were no answers. I wanted answers.”

When Tate engages in an intense emotional affair with a married man—from her therapy group—she and her groupmates question Rosen’s methods. While it’s clear by the end of the book that Tate credits Rosen with her recovery, readers may have a different takeaway.

Rosen, an elfin Jewish man who rubs his heart and smiles when Tate lashes him with vitriol, comes across as a likable but exasperating, inscrutable figure. Is he a mad genius or just mad?

Tate periodically calls Dr. Rosen to vent or accuse him of mistreatment. He rarely calls her back. Once, when she leaves a particularly nasty voicemail, Dr. Rosen invites everyone from the group into his office to listen to it. The obliteration of Tate’s privacy is complete.

As Tate forms deep and nurturing relationships with her groupmates, it seems that what she needs more than witnesses is friends—not casual, after-work buddies, but committed, caring people willing to delve into her messy, embarrassing, intractable problems. Tate’s experience in group becomes a map and a model for how to create healthy relationships in life.

Tate’s struggles, which will feel familiar to many people, suggest a failure of social connections in modern life, particularly during a pandemic, when people lack tightknit friend groups to lift them up, call them out on their crazy, and be there when they’re suffering.

Tate has to find this support through Rosen and his groups (she eventually attends multiple groups, but still continues with her first). Does Rosen simply provide her with a social support system? Or is therapy in the traditional sense actually happening in these sessions?

The answer, perhaps, is moot. Tate eventually achieves her therapy goals but keeps right on going to group. She has no plans to stop. She writes, “Our pull-yourself-up-by-boot-strap culture says therapy should get you up and out in thirty sessions or less. Dr. R offers us tenure if we want it. I do.”