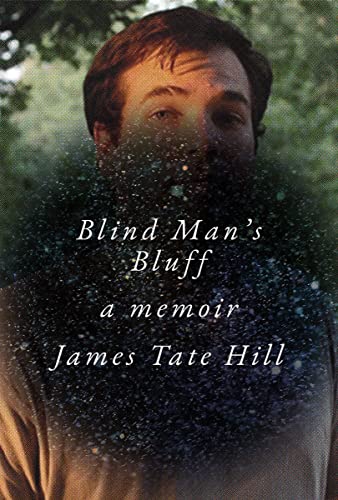 “Hill’s account of low vision is a thought-provoking and emotionally powerful contribution to understanding vision loss. It’s also a revealing portrait of a teenage boy coping with difference.”

Going blind at any age comes as a devastating blow. Losing one’s vision as a teenage boy just months after earning a driver’s license is a special kind of cruelty. James Tate Hill, in his moving memoir of vision loss, Blind Man’s Bluff, describes adjusting to a life of legal blindness as a 16 year old whose top priority is getting a girlfriend.

After his first noticeable loss of vision in one eye at 15, Hill decides to conceal and downplay his problem. “I hadn’t intended my low vision to be a secret until I noticed the way some people, the ones who knew, now regarded me.” In Hill’s telling, this approach to his disability amounts to social survival.

Low vision can be an invisible disability, especially in someone like Hill, who retains enough peripheral sight to get by in some settings and feigns eye contact consistently. “It wasn’t only that I refused to identify as blind. I wasn’t blind. I could still see things. And every day that I passed for the fully sighted person I used to be made it easier to believe there was nothing wrong.”

By staying quiet about what he cannot see, Hill manages to lull his friends and even his parents into a false understanding of his abilities. The failure of communication goes both ways; on occasions when Hill admits to poor vision, his friends remain remarkably uncurious about the details.

Hill convincingly portrays his insecure but resourceful teenage self and then his college-age self who make the choice, again and again, to minimize his blindness. At an initial visit to the hospital, a doctor misdiagnoses Hill with curable swelling of the optic nerve. His one question—"So I’m okay to drive?”—sums up his attitude. He can cope with anything so long as it doesn’t interfere with his social life.

The section describing the year-long period during which Hill loses his vision is the most affecting of this book, which later drags through his twenties as a perpetual student and frustrated writer. In the months after his diagnosis, heartbreak lives in the details, told with no trace of self-pity. Hill continues to buy new comic books every Friday as he always has, “hopeful that I might be able to read them again.”

After he receives an experimental medicine from a Japanese doctor, he tests his progress by staring at the fan on his bedroom ceiling. “For nearly a year, going back to the pair of steroid treatments and the incorrect diagnosis of optic neuritis, I had been watching the ceiling fan disappear.”

Hill weaves the alarming progression of his condition into the routine of his teenage life, which slowly shrinks to include just school and TV. In what he admits is a silver lining to his darkening world, he discovers books on tape. But he worries that listening to books isn’t the same as reading, and for a while he holds a print copy in his hands while he listens, guessing when to turn the page.

Hill grows up in West Virginia, and while he doesn’t anchor his story with dates, he creates a strong sense of time—late 1980s—through ample cultural references. He grows up with The Golden Girls, Designing Women, and Family Ties. He shops at Montgomery Ward, and Rain Man is the defining movie of his adolescence.

The carefree ’80s and early ’90s were not a time of celebrating differences and acknowledging disabilities, and the technology to assist the blind was still cumbersome and scarce. Hill’s college provides few resources beyond textbooks on tape, and Hill makes clear his reluctance to use aids even when they are available.

While Hill does not emphasize this point, he also lacks role models and peer groups to help him navigate the challenges of his low vision. He knows only one blind person, an older man at church. When the man hears of Hill’s condition, he shakes his hand and offers, “Hang in there.”

It comes as little surprise that Hill’s ostrich-like approach to his vision problem is doomed. He never leaves the familiar setting of academia, attending master’s programs in writing and then becoming an instructor. His marriage to a fellow writer comes with all kinds of red flags, starting with her describing the relationship with him as “just so overwhelming.”

Hill’s eventual transformation happens not with an epiphany but in the mundane way that most seismic changes occur—little by little after things have gone badly for far too long. Hill sums up his realization this way: “In trying so hard not to be different, [I]’ve been a poor attempt at ordinary.”

The memoir is uneven, with stronger writing in the first third and unnecessary switches from first to second person throughout. But Hill’s account of low vision is a thought-provoking and emotionally powerful contribution to understanding vision loss. It’s also a revealing portrait of a teenage boy coping with difference.

“If I stare at things long enough, I like to tell people, they eventually come into focus, but this is not true,” Hill writes. With sensitivity and candor, Hill illuminates the importance of empathy and curiosity when communicating with someone whose disability cannot be seen.