Hurry Down Sunshine: A Father's Story of Love and Madness 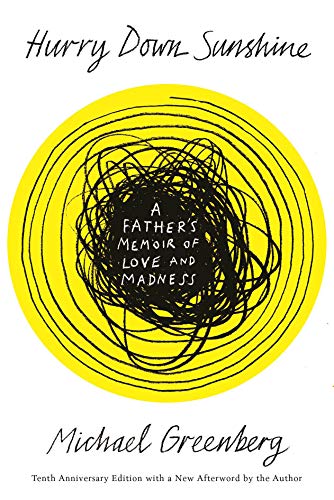 “Hurry Down Sunshine . . . stands the test of time. Michael Greenberg’s intense and probing mind offers a singular perspective on a universal experience. His devotion to his daughter, balanced with his own demons, anxieties, and real-world problems, paints a complex portrait of familial love.”

Hurry Down Sunshine, Michael Greenberg’s memoir of his daughter Sally’s diagnosis with bipolar 1 disorder, came out in 2008 to critical acclaim and commercial success. Oprah gushed, and the New York Review of Books called it “a classic of its kind.” The book was voted best of the year by Time Magazine and Amazon. It has now been re-released on its 10th anniversary with a new afterword by the author.

The afterword, a scant two pages of recent milestones in Sally’s life, hardly justifies buying the book again. It is more likely that this anniversary edition will find a new audience among families dealing with a diagnosis of mental illness.

Sally Greenberg’s “crack-up,” as the author calls it, occurred in the unusually hot New York City summer of 1996. Sally was 15—younger than most to be diagnosed with bipolar disorder—but she seemed older than her years. She came and went as she pleased from her parents’ tiny West Village apartment and stayed up until the wee hours of the morning drinking coffee and reading Shakespeare.

Greenberg describes Sally’s behavior during her first full-blown manic episode in a cerebral, detailed way. It’s a chilling picture of insanity: her voice, her eyes, her language all changed. “Her voice pierces me like a dart. She is flushed, beautiful, unfathomably soulless.” The transformation brings to mind The Exorcist and most other movies made about demonic possession, so often assigned to the young female character.

Greenberg draws the rest of his characters vividly as well, and he paints a particularly dark portrait of New York City, which becomes its own grim presence in the book. His older brother suffered from debilitating mental illness. Greenberg took him shopping every week and to the hospital when things got bad. His life on the fringes haunted Greenberg as a disturbing snapshot of Sally’s potential future.

All of Greenberg’s characters have their own idiosyncrasies, their own craziness, that raises a bigger question about where you draw the line between sane and insane. Greenberg’s wife, Sally’s stepmother, choreographed and performed the kind of interpretive modern dance that the uninitiated would call crazy. Greenberg recalls a solo performance in which she slowly emerged from an Army blanket with a buffalo skull strapped to her head.

His ex-wife, Sally’s mother, was a free spirit who suffered in the harsh urban environment of New York City. She moved to Vermont, where she aligned her polarity and consulted with her higher power. Greenberg’s mother, seemingly the most stable family member, confessed her cruel rejection of his mentally ill brother as a baby, convinced that her emotional shutdown caused his disease.

Even Greenberg himself seemed to be living on the hairy edge financially and emotionally. He struggled to land freelance writing gigs, avoid eviction from his dilapidated apartment, keep his brother off the streets, and prevent his marriage from crumbling under the considerable strain. Greenberg wondered if the instability of his life somehow brought about the mental breakdown of his daughter.

When Greenberg visited Sally in the Manhattan psychiatric ward, his personal trial became a profoundly common experience. Among the patients were a Hassidic Jew, a working class mother of three, and a college professor. Their families all faced the crushing uncertainty of their loved ones’ condition. Many patients passed through the hospital doors on a regular basis, a stark warning for Greenberg that his daughter may never be cured.

Greenberg explores the devil’s bargain of medically treating mental illness, where the pills remove the mania but introduce a thick fog of lethargy, indifference, and confusion. In keeping with his intellectual approach to Sally’s condition—his need to know everything—Greenberg took Sally’s medication himself one afternoon. It rendered him virtually incapacitated.

The book focuses almost entirely on the first two months after Sally’s first manic episode. To Greenberg’s credit, it’s a well-paced read while still feeling like an eternity has passed and the whole world has shifted. The book’s original postscript and the new afterword both contain a brief update on Sally (the book first came out 12 years after her diagnosis). We learn that, like all those others in the psych ward, Sally’s mental illness is cyclical and seemingly incurable.

Hurry Down Sunshine, now in a much more crowded field of mental illness memoirs, stands the test of time. Michael Greenberg’s intense and probing mind offers a singular perspective on a universal experience. His devotion to his daughter, balanced with his own demons, anxieties, and real-world problems, paints a complex portrait of familial love.